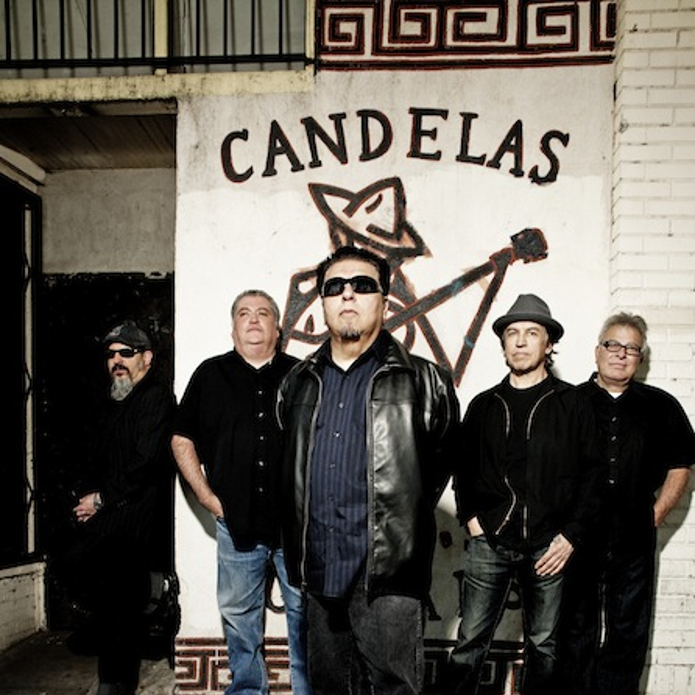 Popular music serves many functions, perhaps none more important than telling the story of the people who create it. It’s right there, hidden in plain sight. It’s in the lyrics and the rhythms, but also in the dance steps, in the instruments used, even in the choice of place where we gather to listen and dance.

American Sabor: Latinos in U.S. Popular Music, an exhibit developed by EMP Museum and the University of Washington, and organized for travel by the Smithsonian Institution Traveling Exhibition Services (SITES), explores the profound impact of Latinos in the popular music of the United States, from R&B and jazz to rock’n roll and hip hop. It is presented in South Florida by HistoryMiami through October 26.

Focusing on five important Latin centers — New York City, San Antonio, San Francisco, Miami, and Los Angeles — American Sabor looks at the musical contributions of Latinos in the United States from the 1940s to the present, putting the music, its interpreters, and creators in the social context that produced them.

“The Latino culture is not one culture but many, and they are in constant change,” says Evelyn Figueroa, project director at SITES.  “And in the United States those changes are more dramatic because they happen in a foreign setting, in another cultural environment. So people of Latino origin coming into the States have to go through a whole process of adjustment, compromises, cultural negotiations, traditions negotiation, in order to maintain their identity. That constant change is part of what makes it fascinating, because in this adjustment to find a comfortable cultural space, new things emerge, some are rejected and others are transformed into something else. A good example of that is new Latino fusion music.”

American Sabor is actually comprised of three distinct parts. There is the physical exhibit, the local programming, and the virtual component, the Website https://americansabor.org.

The exhibition and its programs are made possible by a grant from Ford Motor Company Fund.

The physical part of the exhibit occupies 2,500 square feet and it features panels dedicated to the various cities and styles, from the legendary Eva Ybarra and the accordion, part of the story of San Antonio, to Daddy Yankee, Luny Tunes, and Ritchie Valens, all expressions of different forms of fusion. Some of these panel stations also offer opportunities to hear musical samples. There are also several guided listening stations, a video room, and a 15-foot dance floor with a working jukebox. Yes, dancing is not only allowed but encouraged.

“Then you have the venue component, which includes the public programs at the local level, which the venues are responsible to develop, and we work with them as facilitators, including bringing into the exhibit their own local expressions,” explains Figueroa.

Miami is the 10th city in a tour that started in Sacramento, in May 2011, and has included stops in San Francisco, Dallas, Chicago, Fresno, New York City, Kansas City (MO), Los Angeles, and San Juan. It is scheduled to conclude next year in Atlanta.

“In each venue, the community developed small exhibits that complement the overall show but also bring that local voice,” explains Figueroa. “That way, the community sees itself represented within the broader scope and can take ownership of the exhibit at the local level.”

Meanwhile, she adds, the Website is “critical” to the project and its lasting impact.

Featuring content in English and Spanish, the American Sabor Website includes special sections such as For Classroom and Share Your Story, as well as a jukebox and a blog.

The For Classroom section “was done following the Education Department’s Standards for Learning,  so it can be used at any school throughout the nation,” she says. “And that’s something we are encouraging because Latino music is an amazing tool to teach about culture-sensitive issues and sensitive matters within those communities. On the Website you’ll find issues [labeled] as The Border, Border Reform, Immigrant vs. Migrant and Latino Civil Rights and they are all addressed through music. And these are all issues that need to be taught in school. One of our concerns is that in the U.S., the Latino history is incomplete. But not only incomplete, in many places, in many states, it’s completely out of the school system [curriculum]. So we need to find a way to tell this story.

“One of our goals is not just to teach about music and have fun with it but also to bring in the concerns of the community, the stories of the community that have not been told. That’s why we have that Share Your Story section. Any person can go in, write their story, upload videos and photos and that information is collected at the Smithsonian, we screen everything, … the site is supposed to be up until 2020, then we will  phase it out, catalog the content and deposit it in the America Archives of the Smithsonian for the use of the whole nation. Those stories are going to be part of the documentation and contextualization of Latino culture in the United States.”

Tickets: General museum admission is free for HistoryMiami members and children under 6. Admission for adults is $8, seniors and students are $7 and $5 for children 6 to 12 years old.

In addition to the exhibit, HistoryMiami will also offer several public programs: