All Ears On the Listening Club 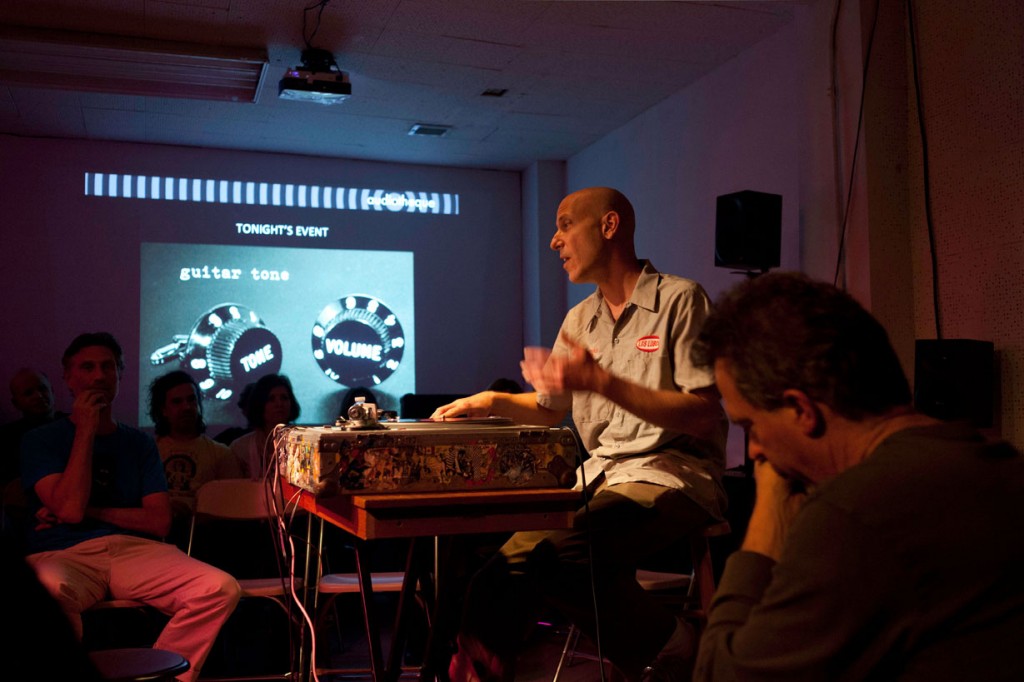 Not satisfied with the challenges of presenting the Subtropics Music Festival, Audiotheque, Frozen Music and the Listening Gallery — among others — Gustavo Matamoros has added a new series of events to his list of contributions to Miami’s new-music community. “It’s an opportunity for exercising our ears and having somebody pick out the theme or a reason for us to gather together and listen to sound.” The monthly gatherings bring together a wide range of sonic adventurers. Matamoros, a Venezuelan-born composer, musician, and producer of experimental music and sound art projects, has devised a nine-session Listening Club, curated by guests Brook Dorsch, Alba Triana, John Van Der Slice, Kerry Ware, José Hernandez, and Armando Rodriguez. Each has a different area of expertise and passion. “My preference for presenting is always free improvisation, avant-garde music, experimental stuff, which is the theme of the Subtropics festival,” Matamoros explains. “But with the Listening Club, by inviting people who have a connection to sound from different ‘points of ear,’ then the whole thing opens up, and all kinds of music can be received.” The most recent session, with the theme of “guitar tone,” was led by Andrew Yeomanson. You may know him better by his professional name, DJ Le Spam; his band, the Spam Allstars, is a fusion of electronics and live instruments. “Everything is basically funky rhythms, but with an improvised approach over the top,” Yeomanson says. The band has played regularly in South Florida for over a dozen years. “We make a living from that, but aside from that I’ve always been a record collector, since as far back as I can remember. That’s what I spend my money on.” And that record collection, which fills his house, provides the ammo for his DJ slot with the Allstars. It was also the reason Matamoros invited him to explore distinctive sound signatures of the guitar. Listening Club presenters share musical samples and talk about their musical context and personal significance. Like the Audiotheque live performances, they’re held in an intimate but acoustically ideal room upstairs at 942 Lincoln Rd. on Miami Beach, part of the second ArtCenter/South Florida space. Yeomanson says that he and Matamoros kicked around a number of ideas. “We just ended up on this topic of guitar, and the way I made the selections was which recordings were important to my development as a listener, also as a musician and an engineer.” Besides his Allstars band engagements, Yeomanson plays the guitar and records other musicians, helping them to optimize their musical voice. That may involve simply fine tuning an existing style or venturing into new territory, likely trying various combinations of gear and technique. Thousands of hours of listening and analyzing music have given Yeomanson a profound knowledge of how to achieve a sound that he can hear in his head. His presentation for the Listening Club followed a personal, rather than a calendar, chronology, beginning with Johnny Cash’s iconic “Folsom Prison Blues” recording that features Luther Perkins’ distinctive “boom-chicka-boom” guitar style. As a young boy, listening to his father’s record, Yeomanson was somehow smitten with that sound, and years later made it his own. “I got so excited by these things when I heard them originally, that it sort of led me down different paths that I might not have gone otherwise.” Sometimes that meant tracking down a piece of equipment; other times, copying a Frank Zappa solo until he had it down. Today with the Internet, you can usually find out the details of any prominent musical session — live or recorded. “It wasn’t like that 20 years ago. It was kind of a quest. You heard a sound and tried to figure out what was this and what was that.” Like when he first heard musician Pops Staples on a soul record belonging to his aunt in Miami. He combed the city for leads. “Finally, this guy who used to work at Blue Note Records said, “Oh that’s a Jaguar, man. After that, I had to have a Jaguar (a Fender guitar), so this record definitely changed my life.” He included historical sidelights — explaining, for example, the transition from attaching electronic pickups onto acoustical instruments to Les Paul’s revolutionary invention of the solid body guitar. And he made note of good documentaries about some of the musicians. In lieu of featuring the most popular of the “guitar gods” like Hendrix, Clapton, King, and Page, he opted for less famous, but equally original and personally influential artists, such as Little Beaver, Pops Staples, Arsenio Rodriguez, Baden Powell, and others. Some audience questions were tech-oriented; “How was that echo produced?” Others were more conceptual; “How do you know what to suggest to a musician you’re recording?” During musical performances, Yeomanson noted, audiences are often distracted by food, drink, dance, and chatter, whereas here, “People were just closing their eyes and really listening. It’s not every day that you can do that in a roomful of people and you can share that.” A measure of the evening’s success was the difficulty of clearing the room long after the session’s official conclusion. For Matamoros, giving free rein to his curators wasn’t hard. “You sort of home in on someone you’re interested in presenting and you just trust them to do what they’re going to do, knowing that they’re just interesting people.” Next up, an audio adventure that explores the music of ancient Greece. It will be led by Armando Rodriguez, who will not only play recordings but demonstrate period instruments.   The next Listening Club is Dec. 11 at 7:00 p.m. at  942 Lincoln Rd., second floor, Miami Beach; free; http://bitly.com/ListeningClubBrochure. For more information on Andrew Yeomanson, http://www.spamallstars.com. http://djlespam.podomatic.com.  Photo credit: Francesco Casale