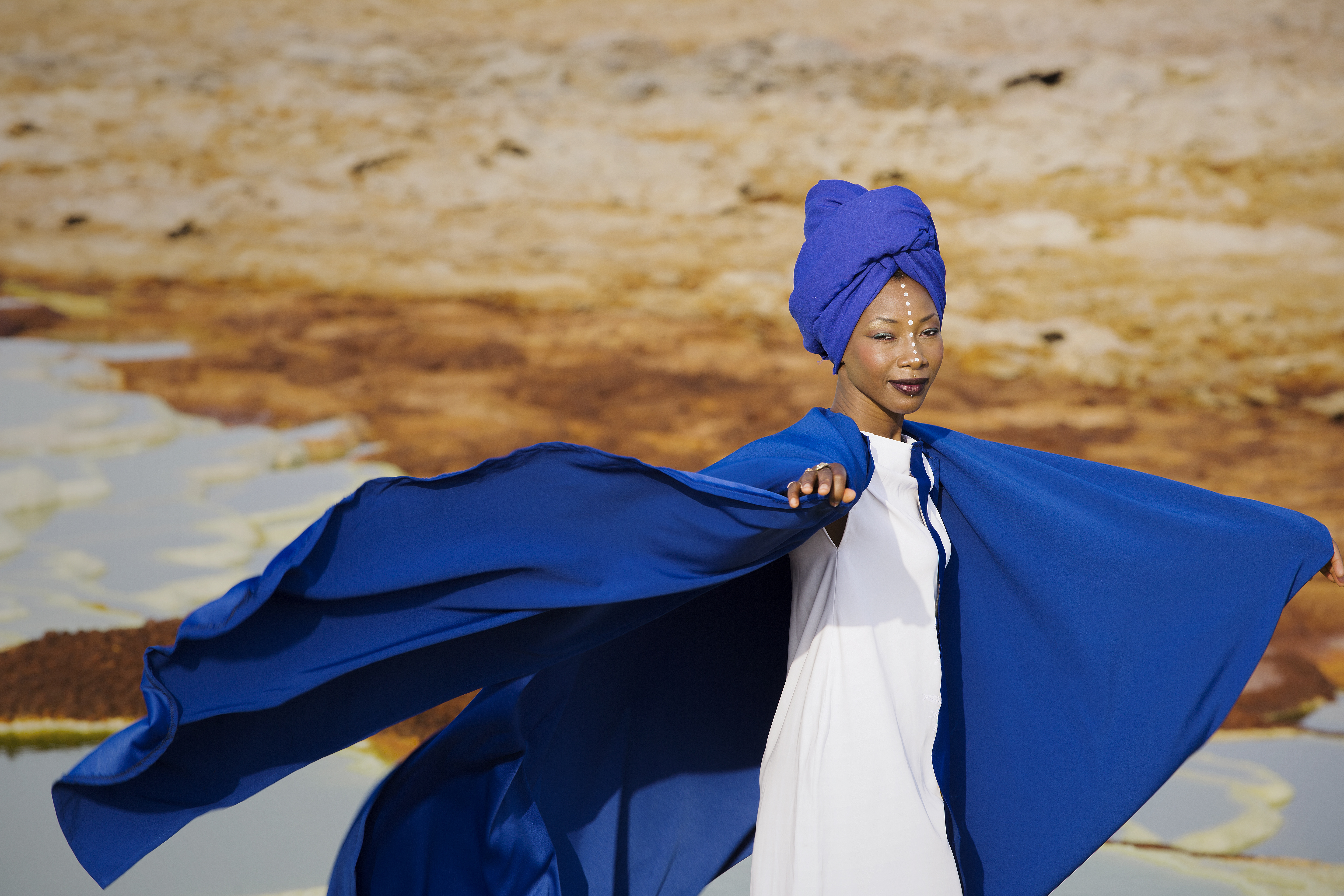 Twenty years is a lifetime in popular music. Twenty years of a popular music event in South Florida is, well, unheard of. And then, there’s the Afro Roots Fest, still growing and still surprising as it launches its 21st edition. Two extraordinary vocalists, Mali’s Fatoumata Diawara and Mauritania’s Noura Mint Seymali headline this year’s Miami Beach program, a celebration of, as organizers put it, “the feminine spirit of world music.” The event, held at the North Beach Bandshell, is a collaboration between Community Arts & Culture, MDC Live Arts and the Rhythm Foundation.

“I wanted to focus on women in global music,” says Jose Elias, founder and artistic and executive director of Community Arts & Culture. “That is our theme this year. But the curatorial aspect of this show was a collaboration. You’ve seen the work MDC Live Arts has done, and the Rhythm Foundation have been the maestros of presenting world-class global music in this community for many years now.”

Diawara and Seymali have profoundly different approaches to the fusion of their respective musical traditions and Western styles and instrumentation. Diawara, who moved to Paris in 2001 to pursue an acting career (her credits include Academy Award nominated film “Timbuktu (Le Chagrin des Oiseaux)” found her voice as a singer-songwriter almost by chance while touring with a theater company. She began performing in clubs and worked as a backup singer, on tour and on record, with jazz vocalist Dee Dee Bridgewater and Malian superstar Oumou Sangaré, her aunt and mentor.

Diawara’s music is a mesmerizing blend of traditional Malian music and elements of Western pop, rock, Afro-Cuban, funk and jazz. In the arc of a song, she can go from delicate, translucent textures and a hypnotic groove to a hard-edged, rock-style guitar solo and back. She sings in her native language, Bambara, and her lyrics address issues such as the pain of emigration, the fate of the ancient Malian city of Timbuktu under the rule of religious fundamentalists, and the practice of female circumcision. Not exactly standard pop fare.

Meanwhile, singer, songwriter and musician Noura Mint Seymali was born in an important Moorish griot family in Mauritania. Her father was a scholar-artist, her stepmother a celebrated singer. (Griots are oral historians, praise singers, poets and musicians.) Backed by a band that includes drums and electric bass, which add a funk bounce to the music, Noura sings while playing the ardine, a 10 string, harplike instrument reserved only for women (she was called “the Jimi Hendrix of the ardine” by Al Jazeera English). She has a penetrating and expressive voice, and the overall sound of her music is a particular fusion that hews closer to traditional music. It has evoked psych rock and blues comparisons in the Western press, perhaps in part because of the remarkable work by guitarist Jeich Ould Chighaly, also Noura’s husband. Playing on an electric guitar modified to suggest the sound of the harplike tidinit, Jeich sets the accompaniment, offering melodic counter lines or mirroring and responding to the inflections in Noura’s singing. It’s a sound at once earthy and otherworldly.

Curiously, that might very well be the description of the music at the very beginning of Afro Roots Fest: a tribute show for idiosyncratic jazz bandleader Sun Ra at the now-defunct club Tobacco Road in 1999.

“I went to see ‘A Joyful Noise, a film about Sun Ra from back in the late ’70s-early ’80s, that was shown at the jazz and film festival that WDNA used to present,” says Elias, perhaps best known as the guitarist of local favorites Spam All-Stars and his Cuban-roots-music group, Cortadito. “I was so blown away — I had never really seen anything about Sun Ra, and I was a big avant-garde jazz fan — that I just felt compelled to do a tribute to Sun Ra. We pulled it off, and we got such a response that it went from a show by a tribute band, the Afro Polyphonic Bass Orchestra, to becoming a festival. And then, it continued to evolve.”

Born in the Dominican Republic to Cuban parents, but raised in the diverse demographic setting of Miami, Elias set out “from the beginning, to celebrate the evolution of African culture in our community. We have a lot of representation of that culture here with the Haitian community, the Cuban community, Jamaicans, Puerto Ricans, Colombian, Brazilians.”

Over the years, the event has showcased South Florida-based performers and groups, and also international acts such as Salif Keita, Vieux Farka Toure, Hassan Hakmoun, and Boukman Eksperyans. As it evolved, it not only survived several venue changes — from the initial Tobacco Road and the St. John’s on the Lake church in Miami Beach, to locations including the Little Haiti Cultural Center and the North Beach Bandshell — but expanded. It now includes events up in Palm Beach County and as far south as Key West.

“It happened because of my work with Spam All Stars and Cortadito,” Elias says. “I’ve been able to establish these relationships in different places […] and they were open to the idea of coming on as presenters and community partners. One of the main focuses of the festival is to bring this music to underserved areas. This year, we’ve added Homestead; we are presenting Afro Roots at the Seminole Theater for the first time. We are featuring [Cuban singer] Danay Suarez, part of our focus on women.”

Just don’t read into this a blooming interest in world music in South Florida, Elias cautions.

“I don’t think that there are more opportunities. In fact, it’s a very niche kind of music. Miami’s always been more of a DJ culture, and this is not electronic dance music,” he says. “But the crowds have increased year after year. And we see that we have a younger crowd coming out to our shows. And, of course, it’s a very diverse crowd, very representative of what Miami is. But I would still say it’s under the radar. We do what we can because we love it.”