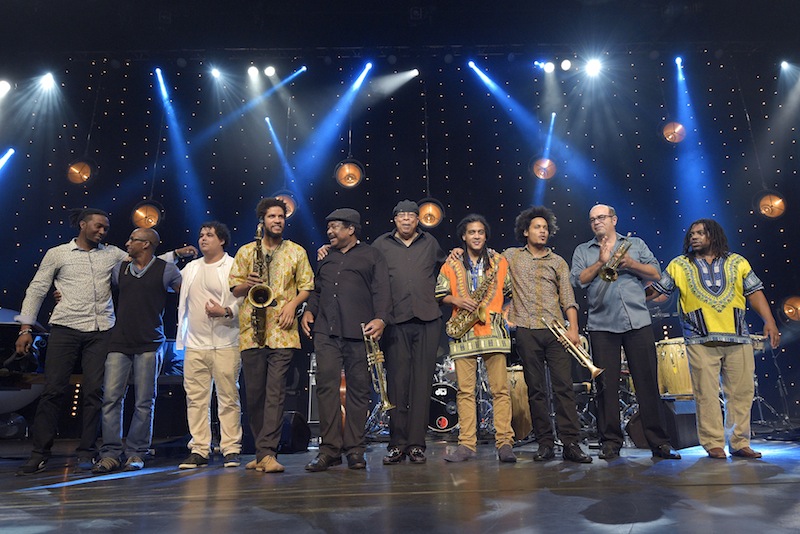 For the past 50 years, Cuban pianist and composer Chucho Valdés, 74, has been a transcendent figure in Cuban music. But despite of his virtuosity as an instrumentalist and the brilliance of his writing, many consider the founder and leader of Irakere, the exceptional Afro-Cuban jazz fusion group that became a landmark in Latin jazz, his masterwork.

Valdés and a 10-piece band comprising his new group, the quintet The Afro Cuban Messengers, augmented by three trumpets and two saxophones, will offer “Irakere 40,” a tribute to Irakere at the Fillmore Miami Beach on Saturday.

“It’s not an Irakere concert,” said Valdés in an interview during a brief visit in Miami a few weeks ago. “This is my group, featuring several generations of Cuban musicians, celebrating Irakere’s concept — today.”

Founded in 1973 as an offshoot of the Orquesta Cubana de Música Moderna, a remarkable all-star band, Irakere was an 11-piece, small big band whose music, mostly written and arranged by Valdés, offered an original musical proposition: the vocabulary and structures of jazz articulating a mix with Afro-Cuban dance music, Afro-Cuban ritual religious music, rock, R&B, and even classical music. The sound was at once ambitious and accessible, innovative but rooted in tradition. Irakere became an independent outfit in 1975, won a Grammy for Best Latin Recording in 1979 and remained active until 2005. Over its long run, Irakere featured some of the best musicians in Cuba, virtuosos such as trumpeter Arturo Sandoval, saxophonist Paquito D’Rivera, and percussionist Miguel “Angá” Díaz. In fact, over time, it became a rolling graduate school of Afro-Cuban jazz.

Saxophonist Carlos Averhoff, a member of Irakere from 1974 to 1994, has lived in Miami since 1997. He’s a professor at Florida International University. “The work Irakere did revolutionized the concept of Latin Jazz and earned respect around the world because of its originality and high quality,” says Averhoff, who Saturday will join his old bandleader to perform in “Valle de Picadura,” a sax feature and the first danzón recorded by Irakere. “Without any intention of putting down any of those who came before or after, Chucho Valdés writing and piano playing is incomparable.”

“Irakere 40” premiered at the Barcelona Jazz Festival last year, and was later presented in various festivals in Europe. This United States tour is accompanied by the release, a few weeks ago, of “Tribute to Irakere (Live in Marciac)” (Jazz Village/Harmonia Mundi), recorded at an appearance at the Marciac Jazz Festival, in France.

Five-time Grammy and three-time Latin Grammy winner Valdés spoke in his interview about Irakere, the tribute. and more.

What did Irakere mean to you?

Chucho Valdés: It represented putting in practice all the ideas I had for awhile such as trying out certain instrumental combinations that were not being used … or how to work with Afro-Cuban jazz with African language, with those rhythms.

Of course when I started I didn’t know what the result would be, but it was an incredible experience.

At that time, were you and the band aware of what you were doing?

At the time neither me nor anyone in the band were really aware of what we were doing.

None of the musicians from the classic lineups of the band are part of Irakere 40. Why is so?

When I decided to do this tribute I also decided I didn’t want to do it with the original members but with players from the generations of musicians that grew up in Cuba listening and learning from Irakere. I thought it made better sense. This way it’s a tribute from a generation to another.

How is it, then, to play Irakere’s music with these musicians?

In its first period, Irakere was perhaps based more on the virtuosity of its players than in the writing. I wrote the charts, yes, but any of those players were phenomenal and could do wonders with what I wrote. And each one of them was a showman. When some of those musicians left and that was missing, I had to really put my pencil to work and focus on the group’s sound, on team work, and that way try to get back some of what had been lost.

With these musicians I get to live both experiences. In the early Irakere, the rhythm section was the foundation and [on top of it] we had a spectacular brass and reed section, with great soloists. Now I have an extraordinary rhythm section that’s not only a foundation but a show in itself and I’m using them more as soloists. But we also have a very strong brass and wind sections. It’s more balanced. Now we have great soloists, writing and team work. It makes the music new again.

Finally, how do you feel about the changes in the relationship between Cuba and the United States?

I don’t talk about politics, but I believe it was time and as a musician I believe it will be very beneficial for musicians in both countries, the exchanges, the fact that we could learn from each other. I would like for young musicians in Cuba to come and study here and for American musicians to go to Cuba and learn our musical traditions. They will find that there, the African roots are alive.