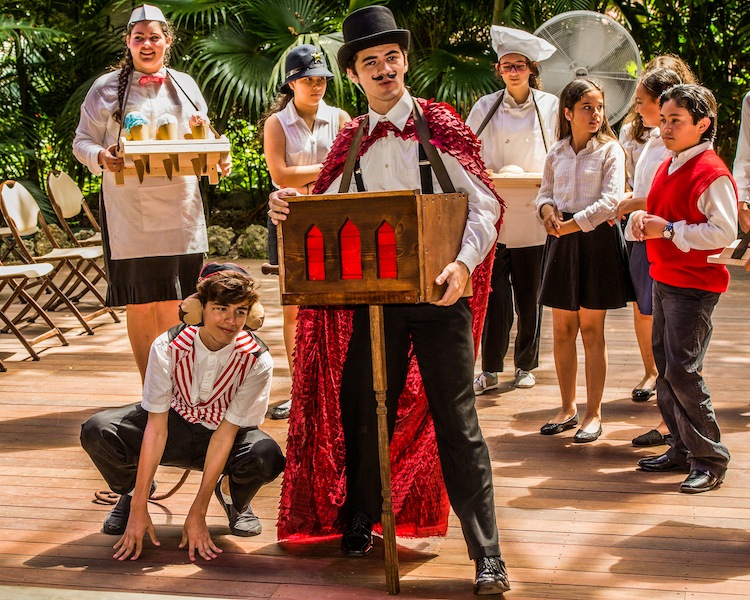 History was key to the message of hope Elaine Rinaldi, director of Orchestra Miami, wanted audiences to take away from the production of Hans Krása’s children’s opera Brundibár, performed Sunday, May 22 to a sanctuary packed with parents and children, many with cell phones held high to catch their son or daughter on stage at Temple Beth Torah in North Miami.

Czech composer Krása directed Brundibár at the Theresienstadt ghetto in occupied Czechoslovakia, which served as a transit camp where roughly 140,000 Jews, including thousands of children, were held before being routed to extermination camps elsewhere. Orchestra Miami will repeat the performance this Sunday at Temple Israel of Greater Miami.

Performing in the play meant a lot to the children of the ghetto because they knew that vanquishing the sinister organ grinder, Brundibár, carried an added meaning overlooked by their SS wardens – the symbolic overthrow of Hitler himself.

Orchestra Miami’s production of the opera emphasizes this history through an added, opening monologue written by Wendell Harrington, adapted by Michael Yawney (who also directs the opera) and based on the diary of a young Czech boy, Peter Ginz — performed by drama student Keelan Machado — who as the son of a Christian mother and Jewish father eventually became an prisoner of the Theresienstadt ghetto.

There was an air of the surreal as Machado, light brown vest fitting loosely over his tall and lanky frame, read excerpts from Ginz’s journal describing the successive waves of regulations placed on the Jews – from riding in the back of buses to a prohibition against walks by the river – in occupied Prague from 1941 to 1942. According to the monologue, even Ginz’s participation in Brundibár was due to the vacancy made by the second violin having just been transferred to Auschwitz.

Following this introduction, Brundibár begins and the feeling changes to fairytale. The action of the opera is set in a town square in Prague. Two fatherless children, Pepíĉek, played by Pablo Taboado, and Annika, performed by Emily Tang, have traveled there because the doctor has prescribed fresh milk for their sick mother. Having no money they plan to sing in the town square to raise it, but they soon find themselves competing for an audience with the organ grinder, Brundibár, performed by FIU Theater major Reid Suttles, cloaked in the archetypal villain’s red satin cape, pencil-moustache and black top hat.

The cavernous space of the sanctuary occasionally swallowed up the children’s dialogue and solos, but Tang and Alexandra Berros, who played the cat — one of the three animals that help the children turn the tables on the organ grinder — were astonishingly forceful in their projection and their rich voices carried impressively. Impressive also was the skillful way the orchestra accompanied the children, though here, too, the unusual grouping of instruments – four violins, cello, double bass, flute, clarinet, guitar, trumpet, snare drum, piano – were a direct reminder of the ghetto and its limited resources.

When not being adapted for mass consumption by Disney, fairy tales often end darkly. Brundibár ended with the combined voices of the children and the orchestra swelling the sanctuary as each child, one after the other, left their shoes carefully arranged in a row on the stage and walked out the center aisle, a reminder that most of the children who took part in the opera would not survive the camps.

Perhaps Brundibár does carry a message of hope, not for a better tomorrow but as a testament that, despite a world made black by imminent threat, the human spirit can remain meaningful and creative, energetic and alive by channeling its energies onto just this present moment.