A Stream of Music from the Nile to Florida 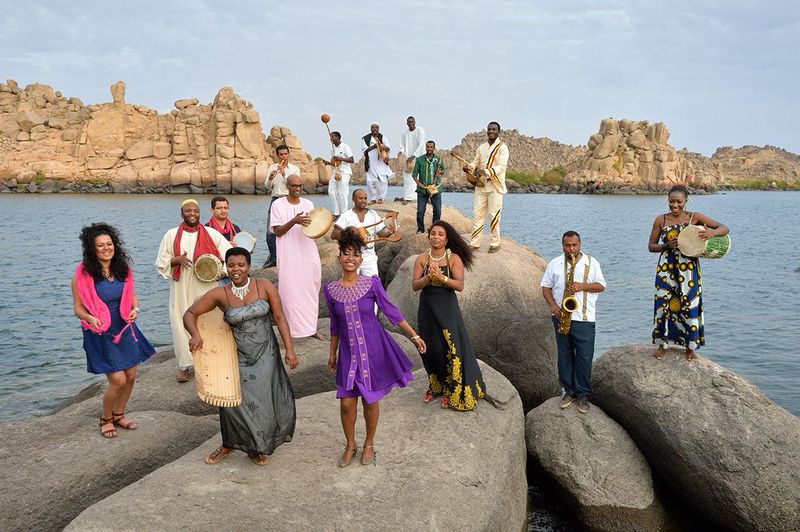 Like few other rivers, the Nile, considered the world’s longest, has captured humankind’s imagination from antiquity to today — a source of life and inspiration, but of conflict as well. Just ask the men and women who integrate the group of performers, educators, and activists known as The Nile Project.

The music that springs from the river’s fertile banks, the cultural and environmental challenges it faces – from booming populations to ecological degradation to political meddling – and the urgency of helping preserve its basin for future generations, prompted Egyptian-American ethnomusicologist Mina Girgis and Ethiopian-American singer Meklit Hadero to launch an initiative in 2011 that would address those issues.

With backgrounds as diverse as Egypt and Sudan, Ethiopia and Burundi, Rwanda, Uganda, and Kenya, musicians and singers were invited to join a collective effort that would give voice to the Nile and its issues through music. Last year, the artists took their musical creations to nearby countries; this year, they have brought their efforts to the United States.

Members of The Nile Project kicked off a four-month U.S. tour in New York City and will be visiting the North Shore Bandshell in Miami Beach on Saturday, Jan. 24, as part of Miami Dade College’s performing arts series MDC Live Arts. Workshops for MDC students and faculty will also be held prior to the day of the concert and afterwards.

“When we started The Nile Project, the idea was to bring together musicians from the 11 Nile countries to collaborate on making music that bridges their musical traditions, instruments, and systems, and use these conversations that we have on stage to inspire a different way of thinking about the Nile,” say Girgis, president and CEO of The Nile Project, from Gainesville, where the group performed at the University of Florida.

“We wanted the musical platform to encourage dialogue and encourage learning, both cultural and environmental, and to get the universities that we’d be working with to start seeing where their role fit into this whole conversation,” explains the 38-year-old cultural entrepreneur.

The conversation surrounding the Nile is one that goes beyond the local problems faced by the countries that benefit from its water and soil. The allocation and control of resources, pollution, sustainability, and other issues, also apply to a state such as Florida, where water is so linked to its future, in everything from the critical preservation of the Everglades to the rising sea level.

To also raise awareness of water-related issues the day of the concert but from a more local perspective, the National Water Dance project, which uses dance as a catalyst to move people to care about the environment and specifically water resources, will offer a free performance earlier in the afternoon.

In the case of the Nile, Girgis speaks of the concept of “the Nile citizen,” or a person who can contribute to the sustainability of the river in some capacity and who does not necessarily have to be from that area.

“We don’t really think of Nile citizens as just the people who live along the banks of the Nile,” says Girgis. “We also consider anybody out there that feels a certain affinity to the Nile to be a part of our audience, of the network that we’re creating.”

Musicians as citizens too

The Nile Project’s concerts are a testament to the work across boundaries and borders that its participants engage in to bring to the forefront the myriad musical styles, instruments, cultures, and languages of the Nile region. The group released a critically-acclaimed debut album, Aswan, in 2013, and expects to launch a new one, Jinja, this year.

“This is really great for me. It’s like I have a new African family I didn’t know before,” says Steven “Sogo” Irambona, Burundi’s leading bassist,  who describes his music as pure Burundi blues adapted to pop music with traditional instruments like ikembe, umuduri, igondera, and indonongo. “I have understood many things about people living along the Nile River.”

Touring for the second time with The Nile Project, the 31-year-old musician recognizes that shared solutions are imperative if the region is to survive.

“As it’s a long river which connects many countries, if one of these countries exploits the water more than others, this will negatively affect other countries,” he says. “So it’s better to find a common ground and decide what to do that is better for everyone.”

Finding a common ground through music is not the only way The Nile Project fulfills its mission of inspiring, educating, and empowering people on the subject. By integrating programs in music, education, dialogue, leadership, and innovation, students of diverse disciplines and geographies become engaged and gain the tools to take action.

“The music is only 25 to 30 percent of our program. The music is really our megaphone. It’s how we attract people to this conversation. It’s how we bring people into the world of the Nile,” says Girgis, who believes it’s the Nile’s young generation, and the youth around the world, more than anyone else, who can create change.

“Initially we were looking at everyone. And then we realized the kind of work we’re doing is complex. It requires an engaged audience,” explains Girgis. “To do justice to the level of learning and understanding that is required to make this happen, people need to have time to invest; they need to have a certain level of education; and they need to be young enough so that they don’t have too much baggage.”

The right lesson, the right platform

The uniqueness of this endeavor and the possibility of reaching diverse audiences on many levels appealed to Kathryn García, executive director of MDC Live Arts.

“I was just so struck by this combination of cross-border collaboration and engagement with university students, that I immediately said, ‘How can we get this to Miami?’” remembers García.

“I thought that the message of The Nile Project about people moving beyond their differences to find solutions to problems was an inspiring one, and it allowed us a platform to work within the college community across disciplines, from humanities to environmental sciences to international relations, to really start a larger conversation about global water issues,” she says.

The Nile Project’s education, leadership, and innovation components will all come together at MDC with the group sharing their knowledge and experiences during a five-day residency with students and also with the college’s Earth Ethics Institute.

Education is so important to The Nile Project group, that a Nile Fellowship and a Nile Prize, among other plans, are in the works as ways to incentivize students to mobilize their peers and come up with innovative solutions to the challenges and threats the basin faces.

“I’d like to see this project evolve into a network of Nile citizens that is trans-boundary, transnational, not only in the Nile basin but elsewhere,” Girgis says.

A version of this appears in the Miami New Times.