A Hot Club with a Latin Swing 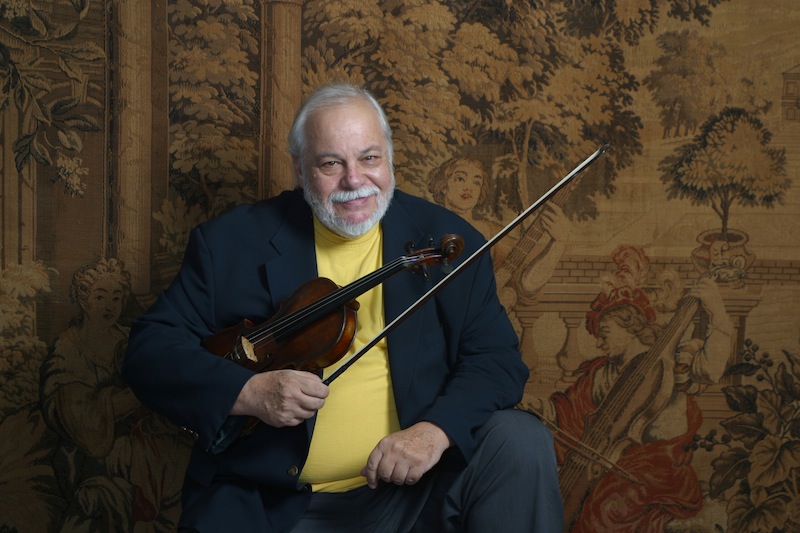 Uruguayan violinist Federico Britos, 76, speaks softly and unhurriedly. In the age of 140 characters and flash stories, his answers unfold full of real characters, unexpected details, and tempting side trips. Because he might be South Florida’s most unassuming music star, the unsuspecting listener might take a couple of beats to realize that, yes, he just mentioned in passing that he recorded with Astor Piazzolla and Charlie Haden; that as a youngster, he got to hang out at jam sessions in Montevideo with Louis Armstrong, Duke Ellington, and Benny Goodman or; while recalling his days living in Cuba, how he played and recorded with major artists such as Orestes Urfé, Chucho Valdés, Bola de Nieve, and Elena Burke.

Born in Montevideo, Britos started playing violin at five. His father was his first teacher. While Britos has since served as principal chair, soloist, and concertmaster with various symphony orchestras in Venezuela, Peru, Cuba, and the United States (such as Miami Symphony Orchestra), he did not follow a traditional path at the beginning of his career, playing in tango and jazz orchestras and working as a studio musician instead.

His most recent project Federico Britos presents The Hot Club of the Americas, brings together his first love in jazz, the sound of the Quintette du Hot Club de France, founded by violinist Stephane Grappelli and guitarist Django Reinhardt, and his knowledge of Latin American and Afro-Cuban music.

Britos will be recognized with a Trustees Award by the Latin Recording Academy in a ceremony to be held Nov,. 18, the day before this year’s 16th Annual Latin GRAMMY Awards taking place is Las Vegas.

How did the idea of remaking these pieces as Latin songs came about?

[Drummer] Carlomagno Araya and [bassist and producer] Reynel Rivero proposed it at the end of 2013.

It was a very clear concept: The music of the Hot Club of France done in Latin styles. That’s why they thought of me: That was the first style of jazz I played in Uruguay and I knew the whole repertory — but I also lived in Cuba and know how to play danzón and cha cha cha and boleros, so it fit perfectly with what they were thinking.

The Hot Club of France featured Stephane Grappelli, one of the great violinists in the history of jazz , but was there anything specific in the sound or the playing of the group that attracted you?

When I started trying to improvise and play jazz, back in the 1950s, someone recommended I should go to the Hot Club of Montevideo. It was a non-profit association that had its place in the basement of a bar. It had a record collection, a piano, a drum kit, and an acoustic bass. They had jam sessions, talks and conferences. I was a kid, maybe 15, 16, and someone introduced me to the managers of the association; “This kid wants to play jazz. What does he need to do?” and they said, “You have to listen to Grappelli, Joe Venuti, Eddie South, Ray Nance — and bring your violin.” The rules of the place were simple: If there were musicians who wanted to play not just listen, they stopped playing records and jammed.

How did you pick the repertoire for the recording and how did you choose in which styles you were going to remake these songs?

Carlomagno and Renyel asked me to put together a list of the Hot Club repertoire, be it by Grappelli, Reinhardt or songs by American composers so we ended up with a list of 60, 70 songs — and then we whittled it down. The important issue was to see how we were going to reinterpret each song.

“Nuages” is a classic but Carlomagno would say “I hear it as a danzón;” “I’m Confessin that I Love You” sounded to him like a bolero and “Djangology,” another classic, we play it like a guaracha. Carlomagno took the initiative but then, he and I would go over every song and I would tell him, “If I don’t feel it in my body, something is wrong. It has to feel comfortable.” And that’s what we did.

What does it mean to you receiving this award from the Latin Recording Academy?

It is very touching because it tells me that the members of the Latin Academy — musicians, producers, artists –, appreciate my work and my career. It is something very gratifying.