A Force of Nature Blows Into Miami for ‘Climakaze’ 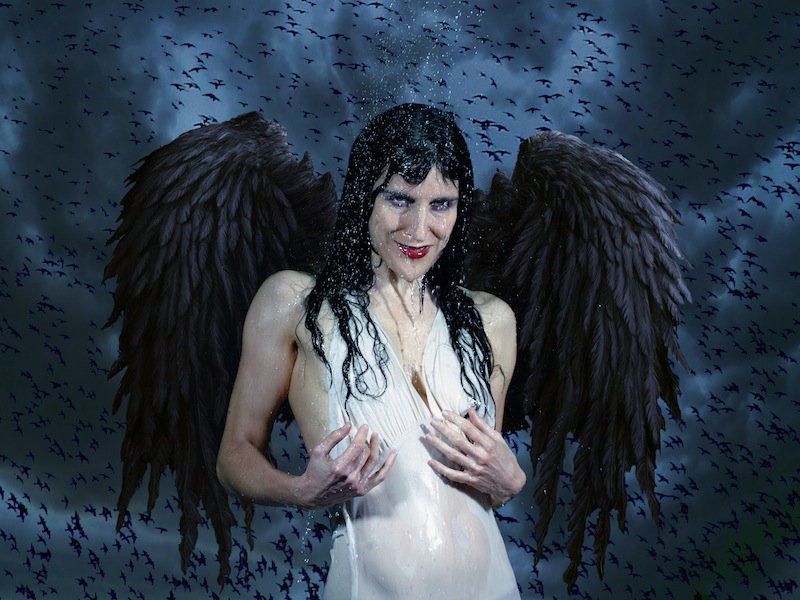 Critics on five continents have described her work as “indecent and breathtaking,” or some close variant. One blessed her for always “going too far.” Another stated he would prefer death to missing one of her performances. They are talking of Moira Finucane, designated a “National Treasure” in her native Australia.

She will perform in a one woman show entitled “Rapture” as the opening event at this weekend’s three-day Climakaze extravaganza produced by Elizabeth Doud in conjunction with FUNDarte and the Miami-Dade County Auditorium.

“Imagine,” Finucane begins as she describes what her audience may expect. “Imagine you are at Versailles in the Hall of Mirrors and the mirrors crash and become water, a sea of water, and then there are icebergs, but suddenly you are in a dark forest and in the company of a bitter woman who’s looking there for her husband. But then she begins a rant, a ridiculous no-sense song about structural oppression. Ah, but soon the woman begins to waltz, and you waltz too for she has invited you, her audience, to waltz with her.”

All this, by the way, is set to music, which at times is reminiscent of medieval baroque, at times cutting edge industrial and in both cases the work of leading Australian composers.

Suffice it to say, this is experiential work seeking new ways to tell stories.

By its very nature, it is also work deeply interested in transformation. Art at its best is, for this performer, nothing less than electricity.

Several years ago, Finucane went literally on a personal odyssey. She intended to develop an “autonomy of hope” and began a project that entailed asking folks in myriad different walks of life, perhaps most tellingly oncologists, how they understood hope. All the comments pointed her back to her early fascination with fairy tales and lives of the saints. “Tiny actions can have epic consequences.”

So it is in the narratives she weaves both on and off stage.

Those individual tiny actions are the ones that allow her to have hope even as she works on a range of social issues that she regards as profoundly interrelated: refugee rights, human trafficking, gender rights, and issues of climate change.

Director and producer Doud understands hope a little differently. As she prepares for this, the third annual Climakaze, she emphasizes the need for the reflection and the grief that must come before new paradigms, new stories can be imagined.

“We look around at our world,” she says, “we look at all issues … but particularly those relating to climate and know we have taken a loss. The Romantic ideal of nature is not coming back. We don’t yet know the quality of what might come, but we need to begin trying telling stories of what may be possible even if those stories are still hard to put into words. We need art to begin to help us imagine.”

And so, as part of her extravaganza, Doud has invited the New York City-based Super-Heroes’ Clubhouse to present two days of their trademark interactive Eco-Theater Labs. “Everybody — local artists and scientists, anybody concerned about issues of climate — is welcome to participate in these labs. Here again, the idea is both to have a place to give witness to a community’s loss and also a place to allow oneself to dream, and perhaps sense together stories waiting to emerge.

But hang on, there’s still more to the weekend’s line-up.

To bring still more stories of our interrelatedness to light, Doud has asked Miami vocalist and musician Inez Barlatier to take the stage in a Saturday night concert. If author Joan Didion is right when she says “one can understand nothing if one doesn’t understand the rhythm behind it,” then Barlatier may be the perfect bookend for the two Climakaze concerts.

The daughter of master drummer and poet Jan Sebon, Barlatier grew up seeped in just about every kind of African diaspora rhythm, as well as those from the Iberian Peninsula and the Near East.

Today she describes her music as taking all this and adding a bit of Shakira and more than a little of Tracey Chapman.

Besides her own band, the Kazoots, she plays with an all women drumming group, Venus Raising, and still manages to find time to instruct area children in the rhythms of their traditions.