100 Years of Ella: Jazz Roots Series Kicks Off With Tribute to the First Lady of Song 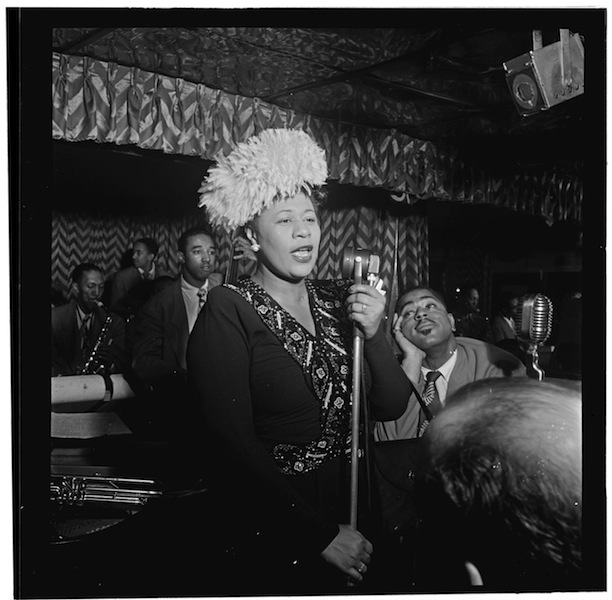 When the management of New York’s iconic Apollo Theater approached drummer Gregg Field last year about organizing a concert there in honor of the 100th anniversary of Ella Fitzgerald’s birth, the opportunity seemed too good to miss. What better way to celebrate the First Lady of Song than a show at the first theater she performed in?

That tribute comes to the Arsht Center this weekend as the season opener of the Jazz Roots series, where the Ella 100 All-Star Quartet (with Field on drums, guitarist Brian Nova, bassist Chuck Bergeron and pianist Shelly Berg) will be accompanied by the young musicians from UM’s Henry Mancini Institute Orchestra and a cast of both prominent and up and coming jazz singers.

Ella Fitzgerald was just 17 when she tried her luck at the Apollo’s Amateur Night. Practically destitute, the $10 prize must have been enticing for an orphan who would busk on the street corners of Harlem, dancing with a buddy for nickels. She planned to perform a dance number for the contest. What she didn’t know, however, is that she would be following the Edwards Sisters, a famous dance act in town from Hollywood.

As Ella told Field the story: “These two women came out and they did a fan dance, and she said, ‘I can’t follow that.’ She was already onstage and she asks the host of the contest, ‘Can I sing?’ and he said, ‘Well, sure.’” She won, of course. But, as Field noted, “If it wasn’t for those Edwards Sisters, there might have never been an Ella Fitzgerald.”

Field’s own debut as a jazz drummer was no less an example of kismet than was Ella’s. He, too, was just 17 when he went to hear his musical hero, Count Basie, play with Ella at a concert in San Francisco. “I made my way backstage and met Basie and met the band and—this is unbelievable but this actually happened,” said Field. “The band went to go onstage and they were about to introduce Basie and the manager came up and said, ‘Basie, Sonny Payne’s not here.’” Payne was the band’s drummer. “Basie turned to me and said, ‘Didn’t you say you were a drummer?’ I said, ‘Yeah.’ ‘Do you want to play?’” Basie asked. “So,” Field said, “as a 17-year-old high school student I actually played the concert with Basie.”

Field remembers Ella with great affection, but “she was two different people. Off stage, she was like the sweetest grandmother you could imagine. She was very generous, always buying gifts for her guys, for the musicians,” he said. “It was a very personal, because it was her quartet and it was like a family that traveled with her. But when she walked on stage,” Field said, “she turned into Frank Sinatra. She was very intense and you had to bring it 100 percent every night.” Most musicians work with a set list for concerts. Ella, on the other hand, “would call songs and she would improvise. You had to be ready for whatever she needed.”

Still, Field said, there was a secret to playing for her: “I never took my eyes off her.” Singers like Ella and Sinatra, “They’re going to give it to you, obviously sound-wise, but they’re going to give it to you visually as well.” Field would play right in the middle of the beat where Ella sang. She once told him, “’When you play for me, I feel I have more air.’” This was high praise. “Ella gave you such a massive target,” Field added with modesty. “It would be hard not to swing with her.”

Swing they will this Friday at the Arsht. In building the show, Field sought musicians to embody different periods of Ella’s long and varied career. It was, he said, like casting a film. The actor David Alan Grier, for example, both cohosts and sings in the show. “I was looking for a guy who would be entertaining, like Louis [Armstrong],” Field said. He wanted to include songs from Ella’s and Louis’s “Porgy and Bess” album, and Grier had recently finished a run as Sporting Life in the Tony-winning Broadway revival of the show, “Kismet.”

Harlem native Wé McDonald will evoke the younger Ella. Like Ella, whom she called her favorite singer, McDonald was an Apollo Amateur Night winner. At 17, she was a finalist on “The Voice.” “I guess 17’s the magic number,” observed Field.

Other singers include the young Brianna Thomas, a Thelonious Monk Competition winner, and Monica Mancini, who is the daughter of the great band leader Henry Mancini. Each will evoke different aspects of Ella’s style: ballads, swing, even the Brazilian music Ella recorded in the early ‘80s.

Along with the Ella 100 All-Star Quartet, the singers will be accompanied by the Henry Mancini Institute Orchestra, a group formed by students from the Frost.

As Shelly Berg, pianist and dean of the Frost School of Music, observed, “It’s really hard to say, without Ella, what might be happening in jazz today.” Her place in the pantheon of American jazz singers is still the absolute pinnacle. “There’s Ella and then there’s everybody else,” Berg said simply.