Zoetic Stage’s ‘The Wolves’ is exhilarating and worth experiencing 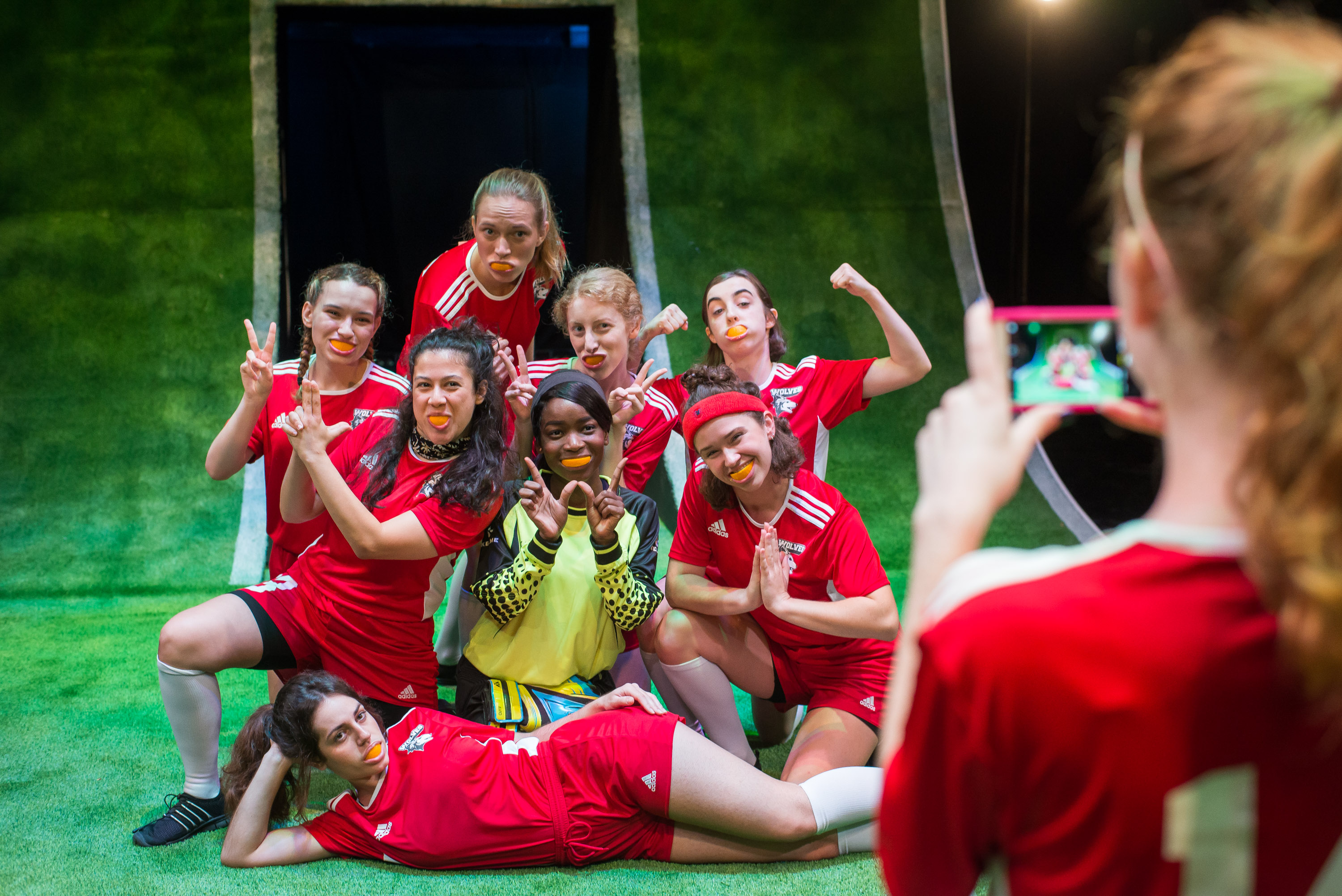 Excellent plays steeped in the masculine world of sports are not a rarity.

Think Jason Miller’s Pulitzer Prize-winning “That Championship Season” about the incendiary reunion of a high school basketball team. Or Richard Greenberg’s Pulitzer finalist “Take Me Out,” about racism and homophobia in baseball. Or Layon Gray’s Carbonell Award-winning “Kings of Harlem,” about a groundbreaking black basketball team.

Powerful plays about women in sports, though, are harder to find. Zoetic Stage artistic director Stuart Meltzer is kicking off the company’s 2019-2020 season at Miami’s Arsht Center with one of them, Sarah DeLappe’s 2016 play “The Wolves,” which was a finalist for the 2017 drama Pulitzer.

Nine of the 10 characters are members of an indoor high school girls’ soccer team somewhere in middle American suburbia. Their sport brings these different players together, and all share an athlete’s competitive passion. But what DeLappe accomplishes (like Miller and Greenberg and Gray) is the illumination of distinct lives within a larger context. These girls are concerned about the world, their pressured classes, their families, their college prospects. 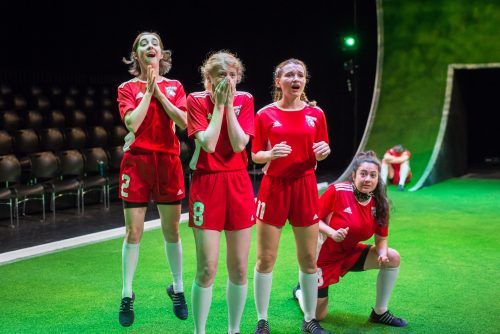 They are funny, driven, sometimes nasty in their rivalries on and off the field.

“Locker room” plays have given outsiders a look into a hyper-masculine hothouse. “The Wolves” lets the audience eavesdrop as these 16- and 17-year-olds stretch on a strip of artificial turf, problem solving and gossiping and pushing each other.

Like the playwright herself, the actors are in their 20s, not so far from the making of their own high school memories. Physically and vocally, they’re convincing as girls whose emotions can go from zero to 60 in the blink of an eye.

Largely, the Wolves aren’t assigned names; same goes for the soccer mom (Elena Maria Garcia) who appears memorably in a brief, devastatingly emotional scene at the end of the play. We start to sort the players out by jersey number, and then each talented actor shapes a memorable character.

The team captain, No. 25 (Laura Plyler), is a motivator as well as a stickler for discipline and decorum. The goalie, No. 00 (Tuesline Jean-Baptiste), is a perfectionistic overachiever whose nerves cause her to vomit before every game. Defense player No. 2 (Lisa Naso) is a tiny thing whose multiple concussions have led
another player to dub her “Queen of the CAT Scan.” That teammate, midfielder No. 13 (Paloma Leite), is a cheerful, playful stoner. Midfielder No. 11 (Cynthia Bonacum) is the overanalyzed daughter of two shrinks.

The slightly goofy defense player No. 8 (Katherine Burns) has her heart set on nationals being in Miami so she can make a side trip to Disney World, and her reaction to different news makes it sound as though someone has stabbed her. Striker No. 7 (Harley DelCogliano) is an alpha chick with an older boyfriend and a potty mouth, tossing f-bombs and calling her teammates “bitches.” Her sidekick, midfielder No. 14 (Rachel O’Hara), follows in her footsteps until a setup gone wrong causes their friendship to turn toxic. The new girl, striker No. 46 (Caitlyn Meagher), is the odd young woman out, a home-schooled world traveler who can’t quite master her teammates’ language. 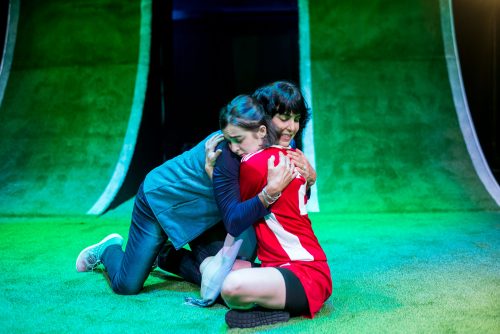 Elena Maria Garcia and Lisa Naso come together in grief in “The Wolves” at the Arsht Center. (Photo courtesy of Justin Namon)

Scenic designer Natalie Taveras’ soccer practice pitch, with high curved panels containing a doorway at each end, seems to be cradling the actors in an embrace. Costume designer Marina Pareja has dressed the Wolves (except for No. 00’s black-and-pale chartreuse goalie outfit) in striking red uniforms, which makes the
performers almost glow against the green of the artificial turf and the black shadows hovering over the audience on either side of the stage.

Although “The Wolves” contains several sections of overlapping dialogue, Meltzer and the actors keep the balance clear enough so that necessary information and references get through. One image at the very end of the play doesn’t have the overwhelming impact that it could, though a slight adjustment in lighting may be
all that’s needed.

For the young women in “The Wolves,” soccer is both a passion and the means to an end, a steppingstone toward their future selves. DeLappe’s story is insightful, exhilarating, tragically sobering. And very much worth experiencing.

What: “The Wolves” by Sarah DeLappe, a Zoetic Stage production
Where: Zoetic Stage production in the Carnival Studio Theater at Adrienne Arsht Center for the Performing Arts of Miami-Dade County, 1300 Biscayne Blvd., Miami
When: 7:30 p.m. Wednesdays-Saturdays, 3 p.m. Sundays, through Nov. 17
Cost: $50 and $55
Information: 305-949-6722; arshtcenter.org