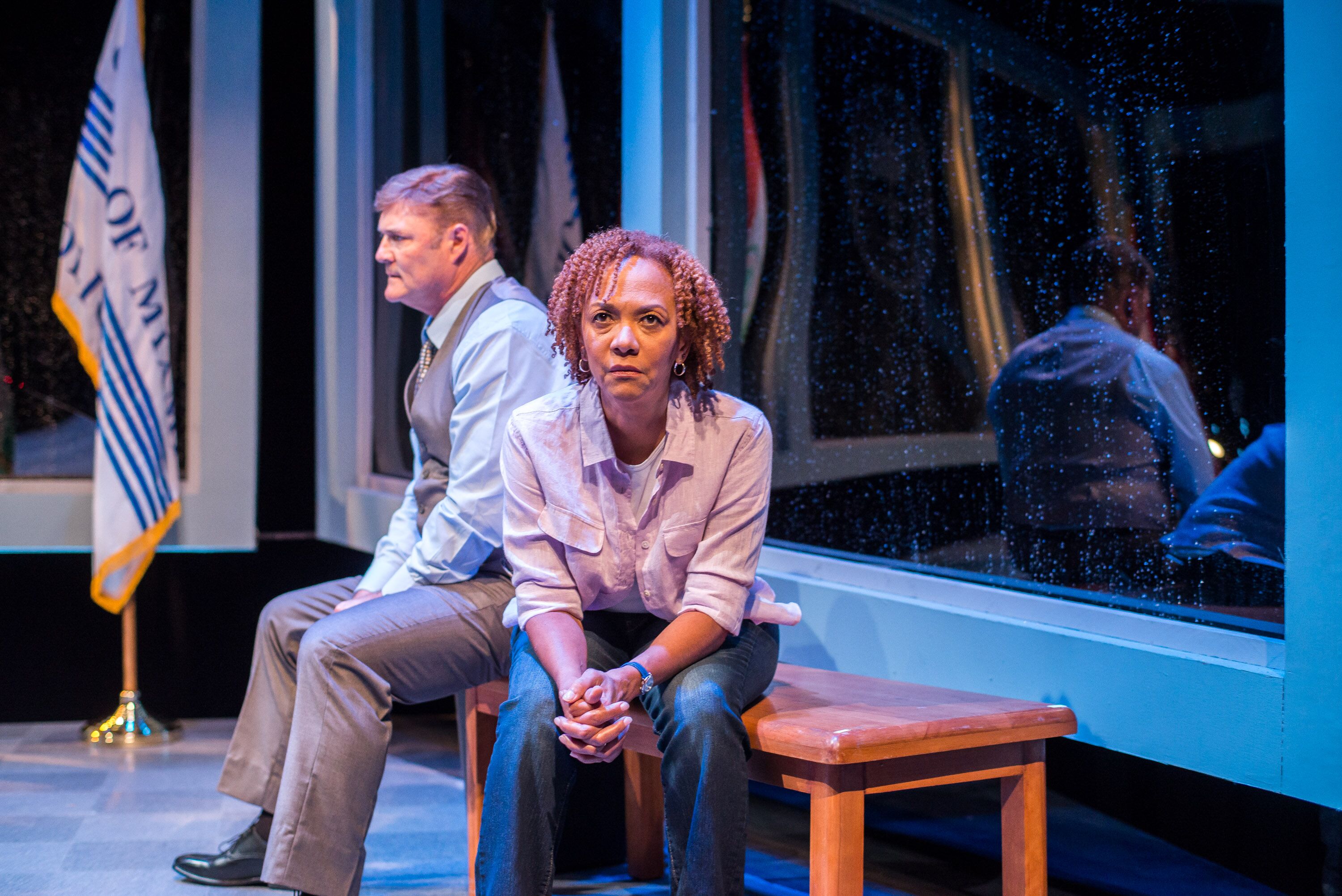 Like many contemporary plays, Christopher Demos-Brown’s “American Son” is a small-cast drama, one that unfolds in a taut 84 minutes. But those minutes hold a story of uncommon depth, one that is straightforward yet layered, observant, achingly real and ultimately devastating.

Demos-Brown’s finest play to date was created in Miami and is set here, though its world premiere was in 2016 in Massachusetts, followed by a high-profile Broadway run in 2018 and a Netflix debut in 2019.

But those who take in the new Zoetic Stage production of “American Son” at Miami’s Adrienne Arsht Center for the Performing Arts – and anyone who loves intensely engaging theater should seek it out – will understand that the wait for the play’s homecoming was worth it.

The work on the stage at the Arsht’s Carnival Studio Theater represents South Florida theater at its finest.

Demos-Brown, a lawyer/playwright whose excellent work has made him a key part of the region’s growing playwriting scene, and Zoetic Artistic Director Stuart Meltzer, who has staged four Demos-Brown world premieres, are superb creative collaborators.

Actors Karen Stephens, Clive Cholerton, Ryan Didato (all of whom worked on developmental readings of the play) and Zoetic newcomer James Samuel Randolph are at the top of their game in “American Son.”

Zoetic’s creative team has devised a Miami police station waiting area that becomes a sleek circle of hell for parents awaiting news of their 18-year-old biracial son after they’re told he has been involved in an early-morning “incident.” 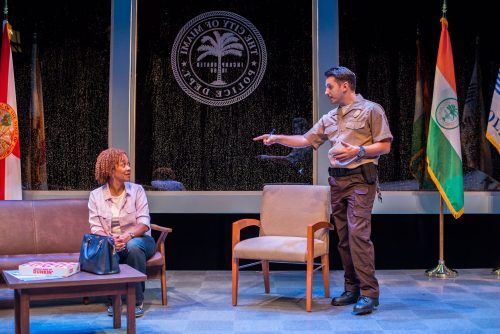 Like the couple’s frustration, the intensity of “American Son” ebbs and flows as Demos-Brown artfully doles out information. Initially, black psychology professor Kendra Ellis-Connor (Stephens) is nervously waiting alone, trying to reach her missing son, Jamal. She leaves him a voicemail demanding he call back, then another that communicates her love and worry. When the young white (and obviously green) Officer Paul Larkin (Didato) appears, she also varies her tactics, combatively pushing for information, getting infuriated by the racial stereotyping of his questions about Jamal, then becoming more conciliatory when the pleasant by-the-book officer finally loses his temper.

Kendra’s estranged husband, Scott (Cholerton), a white FBI agent, finally arrives when she’s out of the room, and Larkin mistakes him for the morning public affairs liaison officer who will take over the handling of the case – and of Kendra. More cringe-inducing racism from Larkin ensues, until Kendra reappears and he realizes his error. Professionally starstruck, Larkin fetches coffee and more information for Scott, to Kendra’s disgust.

As they wait, the couple revisits familiar marital and parenting arguments, eventually touching on the things that first drew them together. Racial issues infuse their conversation and shape their perspectives, which differ sharply when it comes to Jamal’s future.

Then Scott’s brother, who works at a local TV station, sends him an alarming video that rockets the couple into panic mode just as Lt. John Stokes (Randolph), a black veteran cop who is the actual liaison officer, arrives. From that moment, the play hurtles toward a terrible and all-too-familiar conclusion.

To a person, the actors in Zoetic’s cast are ideally suited to their roles.

Stephens, among the region’s most powerful actors, portrays a fierce and intelligent woman so agitated with worry that she just might jump out of her skin. Cholerton, a director who stepped away from acting for more than a decade, is utterly comfortable onstage, endearing in spite of the familial upheaval caused by Scott’s departure, then explosively fearful and heartbreakingly distraught.

Didato, properly amiable and naive as Larkin, effectively navigates the character’s goofy humor and reflexive racism. Randolph, whose Stokes gets the least stage time, is a towering force in the play as he supplies the law enforcement perspective in the incendiary debate over policing and deadly force. His one-on-one conversation with Stephens’ Kendra, just another scene in other productions, is utterly riveting. 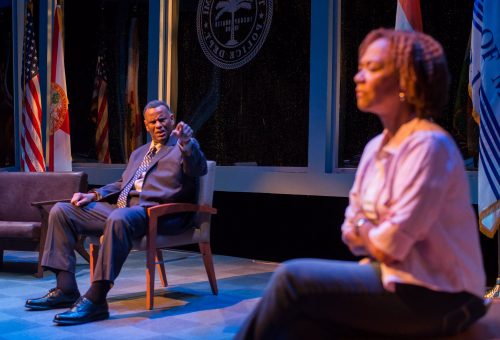 James Samuel Randolph as Lt. Stokes has a tense reckoning with Karen Stephens’ Kendra in “American Son” at the Arsht Center. (Photo courtesy of Justin Namon)

Set designers Natalie Taveras and Jodi Dellaventura, lighting designer Rebecca Montero, sound designer and composer Matt Corey, and costume designer Marina Pareja create an atmosphere that perfectly serves the play, supplying sudden rainstorms that run down the station’s windows, the twirling red-and-blue lights and sudden sirens of police cars, the claustrophobic atmosphere of a government building in early morning where the couple must await the most relieving or worst news of their lives.

“American Son,” now published by Samuel French and slated for future productions in the United States and around the world, has had several impactful productions since the summer of 2016. But Zoetic’s rivals or surpasses all of them, thanks to a playwright and director who understand each other’s language and to a quartet of actors giving performances as powerful as anything they’ve ever done.

What: “American Son,” a play by Christopher Demos-Brown

Where: Zoetic Stage production in the Carnival Studio Theater at the Adrienne Arsht Center for the Performing Arts of Miami-Dade County, 1300 Biscayne Blvd., Miami