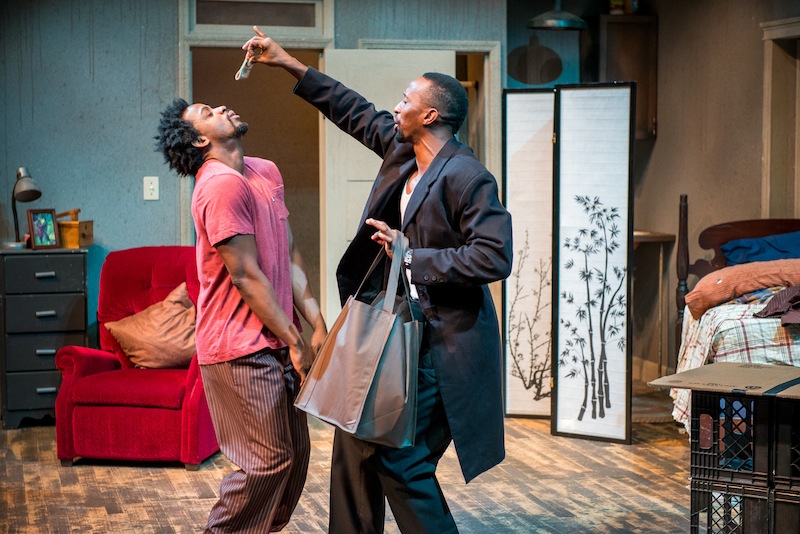 Playwright Suzan-Lori Parks won the Pulitzer Prize for “Topdog/Underdog” in 2002. But as Zoetic Stage’s superb new production of the play at Miami’s Arsht Center demonstrates, her funny, shocking tale of two brothers struggling to survive is as potent today as it was 15 years ago. Maybe more so, given the country’s deepening divide.

Their names are drenched in irony, in part because Lincoln is a black man who ekes out a living by slathering on whiteface makeup, dressing as the 16th president of the United States and allowing customers at an arcade shooting gallery to “assassinate” him multiple times each day. And though the script, a dark comedy that is both poetic and profane, contains myriad surprises, it eventually leads to a tragedy as predictable as it is heartbreaking.

Abandoned as kids, first by their “Moms,” then two years later by their “Pops,” with Lincoln then 16 and Booth 11, the brothers have next to nothing that links them to their traumatic past. Just an old photo album, those names (their father’s idea of a joke) and each other.

Lincoln, a past master at three-card monte, abandoned the lucrative con game after his “side man” Lonny was murdered. Now he has a bizarre sit-down job with a steady paycheck, though he fears he’s about to be laid off, replaced with a wax dummy. And he has another problem: Booth wants his brother to school him in three-card monte, then go into the racket together.

Beyond the fact that Lincoln now sees the cards as a bad-luck symbol of loss, he has no desire to team with his volatile brother. Lincoln’s moves are smooth, slick and quick, his patter hypnotic. Cocky Booth is slower, heavy-handed, temperamental. In cards, as in life, Booth is the underdog to Lincoln’s top dog.He’s ready to blow, to go all Cain and Abel on his elder bro.

“Topdog/Underdog” is a two hander with swagger and a vicious bite, a play uncensored in its handling of everything from matter-of-fact crime to sexual desire turned predatory. Director Stuart Meltzer has shaped a production full of laughter and shocks, carefully calibrating the speeches, silences and movement of the actors so that “Topdog/Underdog” becomes as mesmerizing as Lincoln’s monte patter.

The performances by Brown and Charles, both New World School of the Arts grads (Brown went to New World’s high school, then earned degrees from DePaul University and the Yale School of Drama, while Charles got his college training at New World), are models of richly detailed, powerfully engaging acting.

Brown’s Lincoln is the caretaking older brother, more reliable yet emotionally wounding to the restless Booth in dangerous ways he doesn’t fully grasp. Brown is physically expressive as he tries out ways to spice up the Lincoln-in-the-arcade act or as he tries to fall asleep in the tattered red velvet recliner (picked up curbside, no doubt) that serves as his bed in Booth’s shabby room.

Charles’ moves nearly become a dance, and his shoplifter’s striptease is flat-out hilarious. In Booth, he fuses desire, envy, deep psychological damage and a hair-trigger temper to create a character who inspires both pity and fear.

Michael McClain’s two-level set opens to reveal the close quarters of Booth’s room and an upper level where Greg Duffy’s video design references Lincoln’s tourist-trap work environment and the elements of three-card monte. Prop designer Natalie Tavares has supplied the tools of Booth’s would-be trade along with stacks of magazines that fuel his sexual fantasies.

Sound designer Matt Corey provides subtle music as well as the sounds of the neighborhood, while costume designer Angelina Esposito has dressed Brown in an arcade-worthy Lincoln getup and Charles in clothing that looks like a boosted wardrobe. Rebecca Montero’s lighting traverses the play’s shifting emotions, and it is key to underscoring Lincoln’s feelings about the bad juju of the cards.

Still to come in Zoetic’s eclectic season are the world premiere of Christopher Demos-Brown’s “Wrongful Death and Other Circus Acts” as well as the South Florida premieres of the play “Dancing Lessons” and the Broadway musical hit “Fun Home.”“Topdog/Underdog” gets the company off to a ferocious, heart-wrenching start.