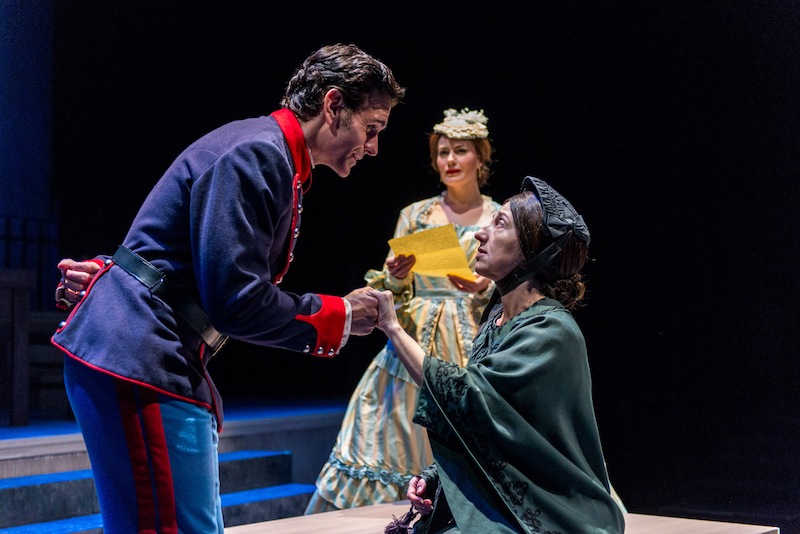 She is a plain woman, a living shadow with a heart damaged by betrayal, chronic illness and piercing loneliness. He is a dashing soldier deeply enraptured by the classic beauty who shares his bed on stolen afternoons.

Soon, though, the plain woman and the handsome man will be embroiled in a relationship fueled by mad love and ravenous passion.

Passion isn’t one of the first emotions that comes to mind when considering the work of Broadway great Stephen Sondheim. Nor is Passion – which is now getting an exquisite Miami production thanks to Zoetic Stage – the first title most people would mention if asked to name a Sondheim show.

The Pulitzer Prize-winning composer-lyricist is regarded as a brilliant artist whose musicals are often cool, cerebral, darkly complex. Yet look at his body of work – including Sweeney Todd, Sunday in the Park with George, Into the Woods, Assassins – and you’ll find plenty of passion coursing through those shows.

Passion, though, is another story altogether. The 1994 Tony Award-winning musical by Sondheim and book writer James Lapine (his collaborator on Sunday in the Park and Into the Woods) tops all of them with its bold, emotionally brutal exploration of obsessive love.

Zoetic Stage, which won the Carbonell Award for its 2014 production of Assassins (the only musical among Zoetic’s first 16 shows), has reentered Sondheim’s world with its new production of Passion.

Presented as part of the Arsht Center’s Theater Up Close series, the show – which has as much in common with opera as it does with musical theater – is a grand achievement for the company, artistic director Stuart Meltzer, a stunning trio of stars and seven fine actors, musical director Caryl Fantel and the design team. Often, Zoetic’s Passion is vocally and visually breathtaking.

Passion is, it should be noted, a challenge for both the artists and audiences. It makes the hugely successful Phantom of the Opera, another musical about the obsessive love of a damaged person for a beauty (Phantom just happens to be playing the Arsht Center’s Ziff Ballet Opera House from Wednesday through March 6), seem like the lightest pop culture entertainment.

Sondheim and Lapine’s take on passion is based on the 1981 Ettore Scola film Passione d’Amore, itself based on the 19th century novel Fosca. The story explores an unlikely love triangle: the handsome soldier Giorgio (Nicholas Richberg), his beautiful lover Clara (Anna Lise Jensen) and a suffering woman named Fosca (Jeni Hacker).

The story starts out hot: Giorgio and Clara are in bed in Milan, nude after an afternoon of passion, clinging to each other as they exult over the depth of their unexpected love. Here, the cinematic roots of Passion are evoked through Michael McKeever’s set design, which places the bed on a small turntable, creating the effect of a camera whirling around the lovers.

Their bliss is all too brief, though, as Giorgio is transferred to a remote, desolate military outpost. It is there that he meets Fosca, the invalid cousin of his commanding officer Colonel Ricci (Mark Sanders).

At first observing Giorgio from afar, Fosca soon becomes obsessed with him. Her neediness and the unrelenting nature of her one-sided love – imagine a 19th century stalker – complicate Giorgio’s life in myriad ways. Whether he reacts with kindness, as Doctor Tambourri (David Kwiat) suggests, or exasperated cruelty makes no difference. Fosca is feeling a ‘til-death-do-us-part kind of love.

Audiences who want nothing more than escapist entertainment from a musical would find Passion a challenge. Its lush, romantic score is beautiful yet complex (and is gloriously played by Fantel and her six fellow musicians), operatic in its demands. Its outsized emotions border on melodrama. Much of the “interaction” between the separated Clara and Giorgio consists of letters they read (actually sing) aloud, which doesn’t make for the most compelling drama.

And yet, what Meltzer, his cast and designers have wrought is a production full of intensity, shimmering beauty and, yes, real passion.

The leading trio, navigating Sondheim’s tricky rhythms and harmonies, makes Passion a triumph for Zoetic. Carbonell winner Richberg compellingly takes Giorgio on an emotional journey that simply wouldn’t work were it not for his range of subtle skills. Jensen, a soprano who looks endlessly gorgeous in Clara’s original Broadway costumes (here adapted by Ellis Tillman), conveys the not-so-simple complications of love. In her Zoetic debut, Hacker is phenomenally powerful and dramatically commanding, her rich alto voice drawing observers into a world of pain and ecstasy.

Theater snobs, and there are plenty here, would have you believe that South Florida companies rarely take chances with difficult work and even more rarely succeed. Zoetic’s Passion begs to differ.