‘Wrongful Death’ and the Art of the Circus-themed World 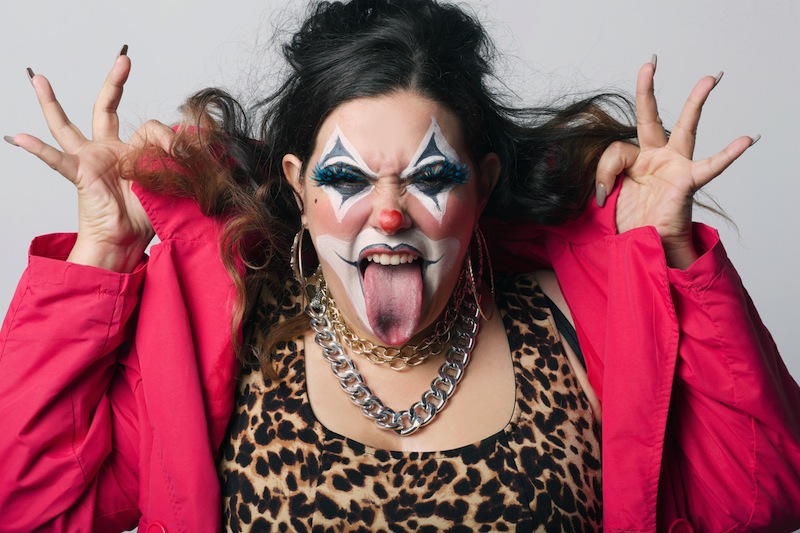 Demos-Brown, a rising theatrical star whose play “American Son” will open on Broadway in November, has drawn on his experience as a lawyer working on wrongful death cases to create a savage examination of the monetization of pain, suffering and the loss of life.

His chief collaborator, Zoetic artistic director Stuart Meltzer, gleaned from the script the notion of personal injury law as a kind of calculated circus. So Demos-Brown, Meltzer and the design team wedded a deeply insightful play centered on a trio of lawyers to the performative conventions of a circus, with Death (Vanessa Elise) appearing as an aggressive yet captivating clown.

The result is a triumph for the playwright, the director, the cast and the company.

“Wrongful Death” centers on Laura Mendes (Laura Turnbull), a savvy tort law attorney whose years of competing in a field dominated by men have made her just as clever, cynical and potty-mouthed as many of her male adversaries. Her 20-year marriage has just crumbled in a surprising way, and her career seems to be doing the same. She needs a big payday, asap.

Her young, idealistic associate David Marvin Schwedel (Ryan Didato) is as much impediment as asset. Marvin, as he’s called, still relies on his ethical beliefs and is loath to exploit an old relationship to sign up a client who could bring Laura her first payout in excess of $100 million.

Laura’s chic, venomous opponent is Darla Van Beck (Autumn Kioti), who uses words as weaponry.Whether feigning empathy for Laura’s travails or calling the younger lawyer “Li’l Marvin” to diminish him, the radiantly confident Darla has a mighty arsenal with which to unnerve her rivals.

Death, the thing underpinning the lawyers’ enormous paydays, is every bit as verbally adroit as Laura and Darla. She’s the never-Grim Reaper as a chonga clown, a ringmaster, a sassy mind-reading control freak.

Elise also plays Jessica, Marvin’s born-again ex whose status as a plane crash victim and new widow has Laura seeing major dollar signs, and an expert witness whose testimony about the cause of the crash may leave you vowing to take the train the next time you travel.

The real ringmaster of “Wrongful Death and Other Circus Acts” is, of course, Meltzer. The director takes Demos-Brown’s insightful, exquisitely written script and presents it in a wildly entertaining way. While the production deliberately calls attention to the make-believe that requires audience complicity, Demos-Brown’s savagely funny take on a world he knows inside out is engaging, enlightening and provocative from start to finish.

Meltzer’s design collaborators have created an immersive environment in which the excesses and absurdities of tort law are the star attraction in this one-ring circus.

Set designer Michael McClain reminds the audience that this is a play about death by decorating the outside of the ring with cartoonish skulls. The entrance areas for the actors are circus-themed and whimsical, with a touch of the grotesque – one is the large open mouth of a clown, for instance, and another has a small plane embedded above it as a symbol of what might make these lawyers even more wealthy.

Lighting designer Tony Galaska makes the not-so-big top – red and yellow banners hung over the playing area – seem sunny and welcoming, then ominous as a particular dream crashes and burns. Matt Corey’s sound design transports the audience into a hospital room, a courtroom and the places where the lawyers needle each other.

Angelina Esposito’s costume for Elise is full-on clown, while she dresses Laura and Marvin in business attire with blood-red accents, and the ruthless Darla in glowing head-to-toe red.Even the “judge” – top-hatted Ross Kaplan in a gorilla suit – goes with the thematic flow, sporting a crimson tutu.

In describing a great performance, it’s a cliché to say that an actor has never been better. But that happens to be true of all four actors in “Wrongful Death and Other Circus Acts.”

Turnbull, a Carbonell Award-winning performer and frequent nominee, pulls off her own high-wire act in making the tough and driven Laura Mendes a sympathetic figure. Demos-Brown’s diamond-polished dialogue sounds utterly natural as Turnbull portrays a smart, desperate, disintegrating woman.The scene in which she paints a soothing, then vicious word portrait to Marvin about his future life is brilliantly played, written and directed.

Kioti’s Darla is Laura’s more-than-worthy opponent, a lanky sardonic shark who is as dangerous as she is striking. After building her acting career in her native South Florida then moving to New York to work as an aerialist and performance artist, Kioti has her own arsenal of performance weaponry.Her entrance – which involves doing a mid-air split as she’s supported by nothing more than a pair of white silks – is the sort of razzle-dazzle stuff P.T. Barnum would have appreciated. As an actor, Kioti rides the emotional waves of Darla’s dialogue like a champion.

Didato’s Marvin is, at first, a kind of male ingenue trying to stay afloat in a world of ruthless women who long ago tossed their moral compasses.His increasing frustration as control-freak Laura coaches him on how to make an opening statement is hilarious and genuine. But just watch how he changes – his look, his demeanor, his body language –once he’s finally initiated into the fraternity of winning-is-everything lawyers.

The flamboyant, inventive Elise most directly connects the play to its circus world. Addressing the audience, pestering a patron at each performance to give up a seat she claims is hers, Death is one bossy, hilarious mamacita.When she steps into the role of Jessica, Marvin’s former girlfriend and future client, she removes her flashy chonga clown earrings and explains to the audience that she’s going to “play a white girl now.” Then she drops her street-savvy speech to turn pure valley girl. Start to finish, she’s captivating.

And so is “Wrongful Death and Other Circus Acts.”Demos-Brown has a lot percolating just now: the opening of “American Hero” (a retitled version of the Zoetic-premiered, award-winning “Fear Up Harsh”) at New Jersey’s George Street Playhouse, plus a commission from that theater for next season; a Maltz Jupiter Theatre reading of “Coral Gables,” a companion piece to the Zoetic-premiered “Captiva,” in April; and the Broadway debut of his set-in-Miami “American Son” in November.

But the stylistically daring, satirical “Wrongful Death and Other Circus Acts” is a special piece, one born of the playwright’s deep knowledge of the seamier side of his day job. Soaring as an artist, finding the ideal creative home at the company he helped create, Demos-Brown has written yet another fascinating play that deserves a very long life.

‘Wrongful Death and Other Circus Acts’ by Christopher Demos-Brown, Zoetic Stage production in the Carnival Studio Theater at the Arsht Center for the Performing Arts, 1300 Biscayne Blvd., Miami; 7:30 p.m. Wednesday-Saturday, 4 p.m. Sunday, through Feb. 4.Cost:$50 and $55; 305-949-6722 or www.arshtcenter.org.