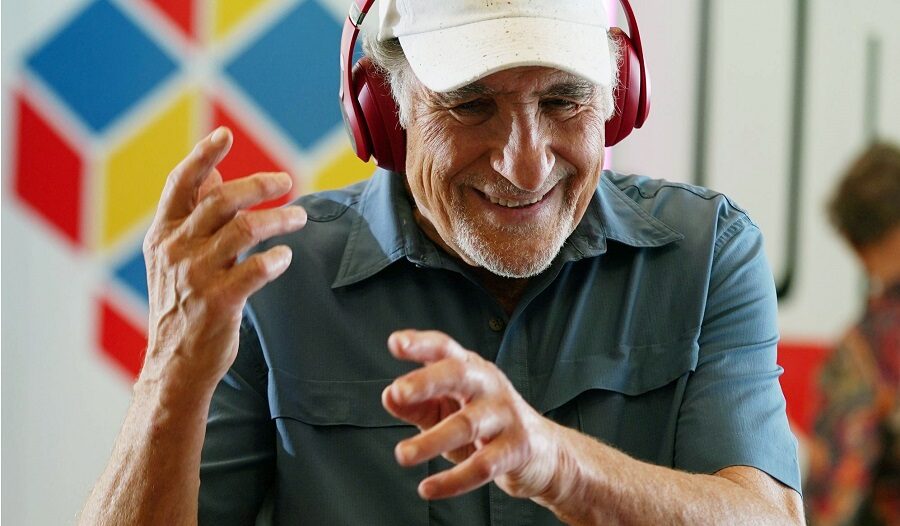 How does a first-time film director and writer get A-list actors to star in his made-in-Miami movie?

To hear Emmy Award-winning star Judd Hirsch tell it, he was first taken in by director Marvin Samel’s chutzpah in wanting him for the title role in the film, “iMordecai.” Then he learned about the movie’s protagonist (and the director’s father), Mordecai Samel, a Holocaust survivor from Poland with a feisty sense of humor and self-assured hubris – and Hirsch was intrigued almost immediately.

“[Mordecai] was yanked out of Poland as a child,” Hirsch says. “People who have had this tragic beginning, they have such comedy in them that it really tells the story. I wanted to play this guy, I knew I could play this guy who survived and had a great sense of humor.”

The world premiere of “iMordecai” is expected to open the 25th edition of the Miami Jewish Film Festival, which will be offered in person and online from Jan. 13-27, 2022. “iMordecai” will be screened the first night at the North Beach Bandshell, 7275 Collins Ave., Miami Beach, with an encore presentation scheduled for Saturday, Jan. 22, at the Michael-Ann Russell Jewish Community Center, 18900 NE 25th Ave., North Miami Beach.

The comedy, a story based on the director-and-father relationship, presents a slice of life about the family of a Holocaust survivor who was born in a different time. Mordecai, now a retiree living in Aventura, Fla., is facing the realities of the 21st century, including trading in his trusty “flip phone” for a device that has, as he laments, “no buttons.” 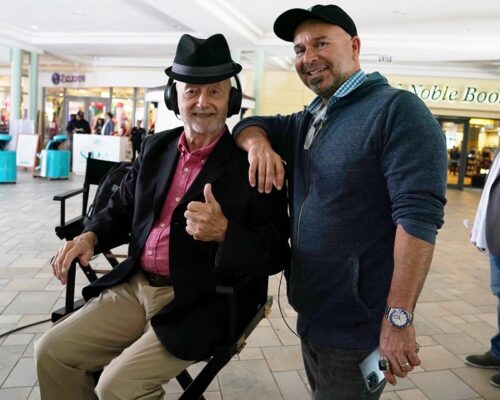 Mordecai Samel and son Marvin Samel, director and writer of “iMordecai,” during a day of shooting at the Shops at Sunset Place in South Miami. (Photo courtesy of FeMor Productions)

Upon learning Samel wanted to meet with him, Hirsch recalls setting a condition: If Samel came to his favorite New York City eatery, Nick’s Restaurant and Pizzeria on Second Avenue and 94th Street, he would speak with him.

“He’s in Florida, so I never thought he’d come,” Hirsch says. “Lo and behold, the day I told him to come up, he was there. He was sitting in that restaurant waiting for me.”

Bringing the true story to the screen was a seven-year-journey for Samel, the Brooklyn native who relocated his cigar business to South Florida in 2004. He created Drew Estate in 1996 with college fraternity brother Jonathan Drew, and they sold it to Swisher International Inc. in 2014.

“I have always been a storyteller,” Samel says, of the special skill he honed while promoting his product at stores and conferences around the country. “I did the cigar circuit for 20 years. What I learned was there is only so long that you can hold people’s attention about a cigar wrapper, leaf and filler.”

So he began telling stories about his relationship with his father, and it turned into a quasi-comedy routine.

“Then, as soon as I was finished at one place, I’d write down what story I told because I knew I was going to go back there again and I didn’t want to repeat the same routine,” he says. 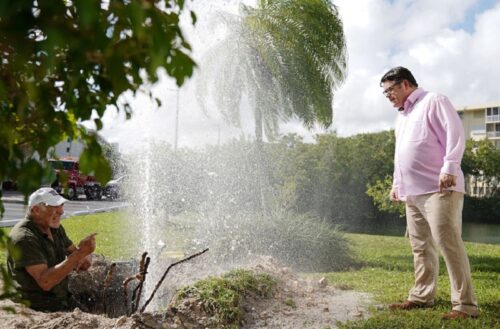 Judd Hirsch as Mordecai Samel and Sean Astin as Marvin Samel in a scene shot in Aventura. (Photo courtesy of FeMor Productions)

After selling the cigar business, Samel was encouraged to compile his family stories, but it wasn’t an easy road.

“Then my twins were born, and my mother was diagnosed with Alzheimer’s disease. And what should have been the happiest time of my life, well, it threw me into a tailspin,” he says.

At night, in between feeding the babies, he would hole up in his home office and commit the stories to his computer.

“I had never written anything but copy about my cigars,” Samel says. But he knew he had something.

He started writing a film treatment and found a screenplay writer named Rudy Gaines to work with him. That’s when things began to take off. Los Angeles film producers Allen Bain and Dahlia Heyman came on board, eventually persuading Samel that he should direct the film.

He dove into learning from directors including Ron Howard, Jodie Foster and Martin Scorsese – spending 10 hours a day on the online teaching platform, MasterClass.com. 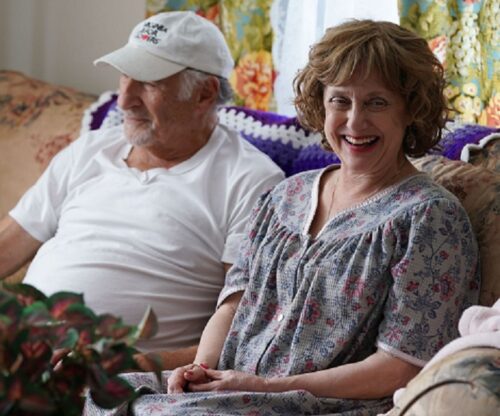 “I took a deep dive and filtered out all the noise from my life for over a year,” Samel says.

During the Scorsese class, Samel got the message that gave him the confidence he needed: “Martin Scorsese said, ‘You have to make your story personal.’ I said to myself, ‘Well, that shouldn’t be a problem with ‘iMordecai’ because it’s about my life.’ ”

Samel enjoyed what he called surreal days on set, when he was interacting with his father and had Hirsch “on the other side” playing his father. It seems Samel’s two “fathers” really clicked.

“We just kind of loved each other in a second,” says Hirsch, who starred in TV’s “Taxi” and “Dear John.” “[Mordecai] was as genuine as could be. Because the son wrote the story, I wanted to find out how much of everything was true.”

Samel is played by Sean Astin, of “Lord of the Rings” fame, and another “Taxi” alum, Carol Kane, took on the role of Samel’s mother, Fela, who passed away just before shooting of “iMordecai” began.

The other character in the film, Samel says, is Miami. Scenes were shot in Aventura, of course, as well as in South Miami, Wynwood and Miami Beach. In one of the most pivotal and poignant scenes, Mordecai and Fela walk along Lincoln Road, where the couple were known to spend their Sundays.

The Miami Jewish Film Festival will include world premieres of other made-in-Florida films, too, including the documentaries “Against All Odds: Surviving the Holocaust,” “Ezra, May His Memory Be a Blessing for All” and “Sylvie from the Sunshine State.”

For his film, Samel says they also looked at locations in Savannah, Ga., “but I wanted this to be a love letter to Miami. Every shot in the film that takes place in Miami has a personal relationship to my parents and me.”

COST: Virtual screenings are free of charge, while in-person range in price from $15-$36.