“Winter Shorts” ushers in the holidays 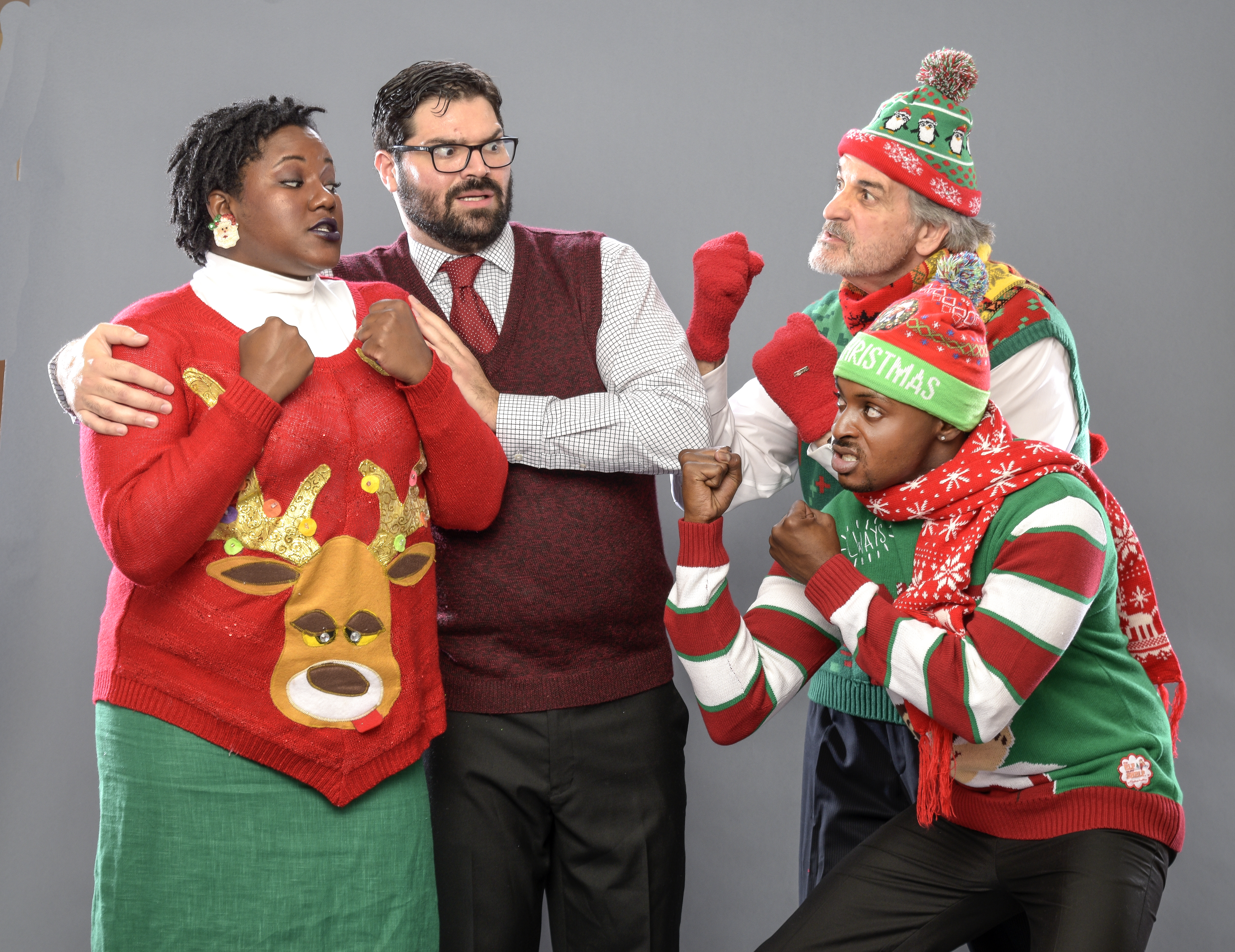 With the commercial pushes for Christmas, Hanukkah and Kwanzaa starting earlier every year, you could be forgiven for connecting with your inner Grinch before the calendar flips to December.

City Theatre aims to change that mindset, reconnecting theater lovers with the spirit of the season through a new edition of Winter Shorts in the Carnival Studio Theater at Miami’s Arsht Center Dec. 6-23.

Founded in 1996 by Susan Westfall, Stephanie Norman and Elena Wohl, the company specializes in programs of short plays, comedies and musicals. It has forged its strong national reputation through its popular Summer Shorts festivals, presenting the annual LGBTQ-themed Shorts Gone Wild lineup with Island City Stage in Wilton Manors, taking the company’s annual Short Cuts tour into the schools and numerous ancillary efforts.

Actors Alex Alvarez, Diana Garle, Jovon Jacobs and Dave Corey are returning from last year’s Winter Shorts company, joined by Daryl Patrice and Irene Adjan.  All have experience with City’s shorts format – this is Adjan’s seventh time in a shorts company – so even going into rehearsal, the performers had a camaraderie as well as a comfort level with the show’s varied, quick-change format.

“This is like working with family again,” Garle says. “We’ve all done it before. It’s fun and comfortable. We all know the formula. It’s been a breeze.”

“I love doing this,” says Adjan. “I consider myself a character actress, and here I get to play a variety of characters of various ages and types.  It’s so fast. In the past, I had pieces back-to-back, with wig and costume changes. The idea is that the audience doesn’t notice that.”

In Winter Shorts 2018, Adjan is playing a weary holiday worker in Jeanette Farr’s “Fulfillment Center,” the wife in Mark Harvey Levine’s riotous “A Very Special Hanukkah Special,” the grandma in Steven Hayet’s Thanksgiving play “Talking Points” and one of the siblings furiously wrapping gifts for their kids in the wee hours in Angela Stern’s “Mama’s Eggnog.”  The other plays are the world premiere of Miamian Jessica Farr’s “Hapless Disciples,” the City Theatre-commissioned “Everything that Happened Before that Terrible Holiday Sweater Party” and another play by Levine, “Oh Tannenbaum.”

Corey, who returned to acting after a 50-year career in radio, is playing Adjan’s spouse in “Talking Points” and “A Very Special Hanukkah Special.” He’s also a caroler in Yockey’s “Sweater” play and a talking Christmas tree in “Oh, Tannenbaum.”

For himself and audiences, Corey thinks Winter Shorts is “almost like hanging the stockings, part of the holiday celebration.  I think we all appreciate getting a break from what’s going on in our lives.”

As for Ledford, Corey – and his fellow actors – are a little in awe of her ideas and her ability to communicate with each performer in an individualized way.

“I’ll stand there and watch Margaret’s brain work. I think, ‘Oh, God, Margaret. I wish I could get inside your head. It must be like Disney World in there. She has such an imagination!’” Corey says.

“These actors are all so creative. They come to rehearsals with ideas I’d never thought about,” she says.

Jacobs, coming off a long run in Miami New Drama’s “One Night in Miami,” says of Ledford, “I met her when I was a Summer Shorts intern. She knows how to communicate with actors, to refer to something you would know. She caters to the person, which makes it easy to work. And she’s patient – never stressed.”

Director Ramirez describes Ledford’s gift this way:  “She’s multilingual in how she has a knack for finding your language and learning it.”

Alvarez has a couple of the edgier roles in this year’s Winter Shorts, notably as the fruitcake-bearing hubby in “Sweater Party” and the brother in “Mama’s Eggnog.”  That’s perfectly fine with him.

“I like the outrageous ones. It’s fun to play the truth within absurd, crazy circumstances. It’s almost like playing the bad guy,” he says.

“I love the weird stuff. I’m the straight character opposite someone’s craziness,” she says. “I love getting to play four different characters in a night. It’s like a superpower.”

Director Quiroga’s piece, “Mama’s Eggnog,” is arguably (along with “Sweater Party,” the most outrageous play in this year’s lineup (the major plot point is something that can’t be revealed in advance). But he doesn’t see it that way.

“It’s outrageous and absurd but not far-fetched,” he says.  “It sounds like something someone would do. It has the most vulnerability.  It has comic moments, but the relationships among the characters are real.”

Farr, who just played Goneril in Thinking Cap Theatre’s production of “King Lear,” serves as City Theatre’s administrative manager and director of its Short Cuts tour.  But her “Hapless Disciples” piece, about two young moms who take a break from their church’s Christmas pageant to grab a smoke and swap stories, didn’t get to Ledford in the office. The artistic director found it on the National New Play Network’s New Play Exchange and loved it.

“We were looking for female voices, trying to find that last piece,” Ledford says.  “We read it to Susi [Westfall, City cofounder and literary manager], and we all loved it.”

Farr is developing a number of plays, and of this one she says, “I’ve been writing some woman-centric plays…We don’t often see women talking to each other about their fears and secrets.”

Though City Theatre has long made its Shorts festivals look easy to its legions of fans, creating a buoyant program of short theater is more complex than it seems.

“The difficulty is in not playing these pieces on one level,” Ramirez says.  “These are so rich in what’s going on underneath them.  The audience loves them because this is how we consume information now. It’s faster, shorter, then on to the next thing in a 90-minute production.  And if they don’t connect with a piece, just give it eight minutes, and it’s on to the next thing.”

Review: In Little Havana, Uncle Scotchy is serving up h...

Juggerknot Theatre Company teams with musician/storyteller Eric Garcia for the immersive theater experience "The Blues Opera" where 10 people get a glimpse into one man's life during a game night in Little Havana.
Continue Reading

The more things change, the more they stay the same could be the message of M Ensemble's production of Pearl Cleage's “Blues for an Alabama Sky," an emotional story set in 1930.
Continue Reading