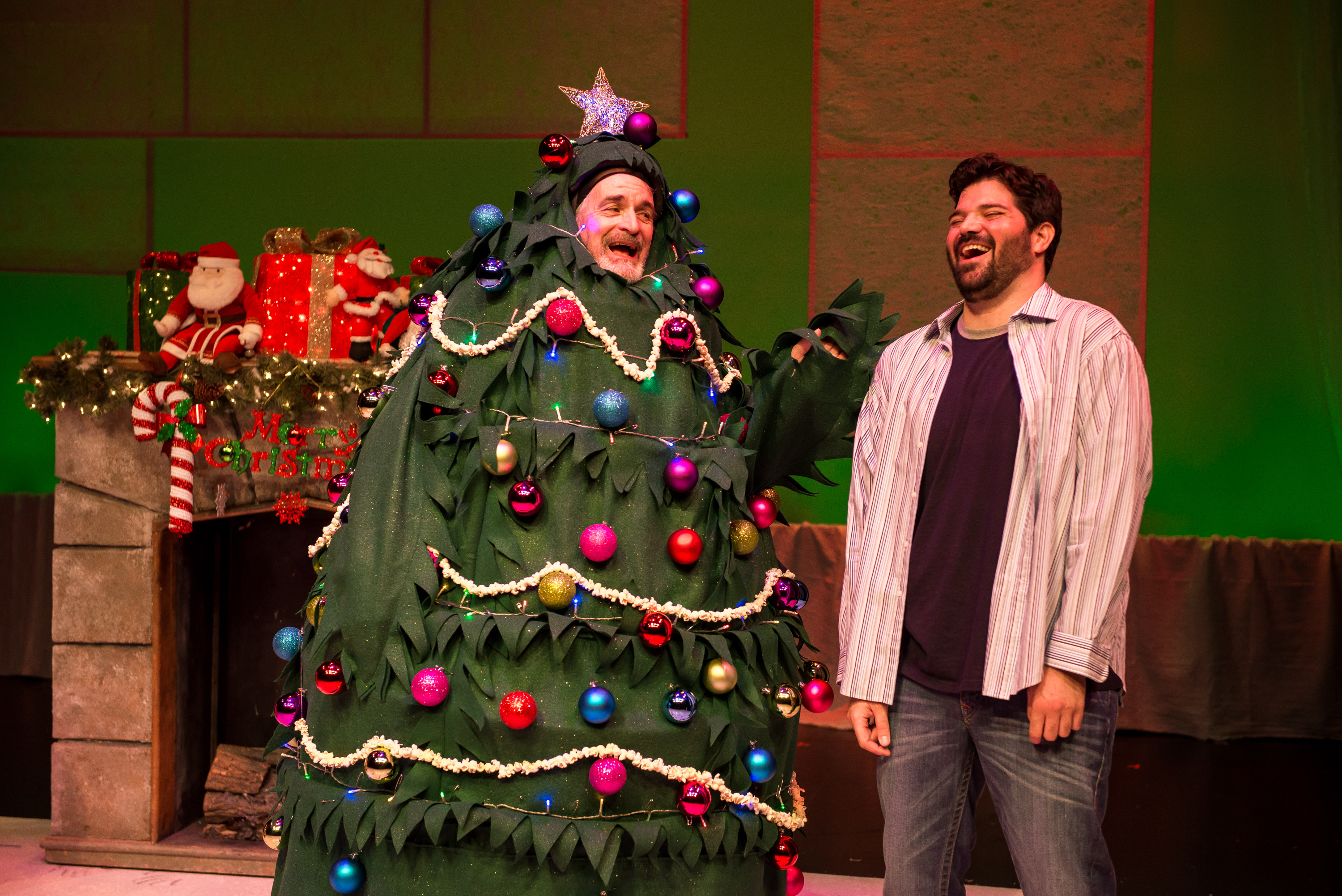 Like a sampler of holiday treats, City Theatre’s 2018 edition of Winter Shorts offers plays aimed at satisfying a wide range of tastes.  Sweet, tart, savory and (in a couple of cases) slightly stomach-turning, this year’s batch of brief comedies has something for just about everyone.

And the fundamental truth of every shorts program applies: If you’re watching a play that doesn’t speak to you, wait 10 minutes and a completely different piece will appear.

Curated by artistic director Margaret M. Ledford and her City Theatre associates, the new Winter Shorts at the Arsht Center’s Carnival Studio Theater contains seven plays served up in a brisk 90 minutes. The entire six-actor cast appears in the first and last shorts, with the others featuring different combinations of performers.

First up is Steve Hayet’s Thanksgiving-set piece “Talking Points,” staged by Gladys Ramirez.  Three generations are gathered around a table when son Mike (Jovon Jacobs) gets up to deliver a speech regarding the reason for one obviously empty chair.

Styled like a press conference, the family “conversation” features questions from Mom (Daryl Patrice), Dad (Alex Alvarez), Grandpa (Dave Corey) and slightly out-of-it Grandma (Irene Adjan), along with nonstop razzing from younger sister Sam (Diana Garle).  The comedy that flows from that stylized setup is clever, but at the end, “Talking Points” digs deeper to reinforce a family’s caring support for a young man grieving a lost love.

The Ledford-staged world premiere of Jessica Farr’s “Hapless Disciples” features a pair of young moms, Sarah (Garle) and Kelly (Patrice), grabbing a smoke break during the Christmas Eve nativity pageant at their Texas church. The friends are dressed like angels, but as they take sips of the booze in Kelly’s flask, their conversation explores more earthly concerns, particularly their worries about how they’re raising their kids.  The funny, frank conversation and the camaraderie between Garle and Patrice flow easily.

The comedy turns surreal in Mark Harvey Levine’s “Oh, Tannenbaum,” also staged by Ramirez.  A newlywed named Liebowitz (Alvarez) is celebrating Hanukkah and Christmas (he’s Jewish, his wife’s Christian).  To his astonishment, his colorfully decorated Christmas Tree (Corey) begins talking to him, asking for a ride back to his forest of origin.  Underpinning the silliness is a message of respect for wide-ranging beliefs and empathy for all living things.  A star tops the talking tree, but the real star in this piece is the wonderfully imaginative costume designer Ellis Tillman, who bedecks the greenery encasing Corey with ornaments and blinking lights.

Jeanette D. Farr’s world premiere “Fulfillment Center,” staged by Ledford, features a weary Gen X worker named Mimi (Adjan) and her ultra-peppy Millennial coworker Alex (a very funny Jacobs). In the wee hours of Christmas Eve morning, the pressure in an Amazon-inspired facility to get orders on their way to customers is through the roof.  While Mimi seems finally undone by her dead-end job, Alex (fueled by multiple energy drinks) sees it as a means to bigger and better things.  Taking time to listen, care and reach out is at the heart of “Fulfillment Center.”

In the Ledford-directed world premiere of Steve Yockey’s “Everything That Happened Before That Terrible Holiday Sweater Party,” wife Sally (Patrice) is all decked out for a holiday party she’s reluctant to attend. Hubby Matthew (Alvarez) is running late, to her annoyance, but even more annoying is an aggressive group of carolers that keeps turning up.  When the conversation turns to fruitcake, beware.  Even fruitcake lovers may not be able to stomach the stuff after “Sweater Party” takes a creepy turn.

Siblings Dallas (Alvarez), Courtney (Adjan) and Belinda (Garle) are back in their family home, wearily yet frantically trying to wrap the last of their sleeping children’s Christmas presents at 3 a.m., in Angela Stern’s “Mama’s Eggnog.”  Staged by Andy Quiroga, the piece gets the dynamic of quibbling yet loving adult siblings right as the three feel the void of their first Christmas without their late mother. But this one too takes a watcher-beware turn once Belinda breaks out the eggnog.  Ewwww.

Winter Shorts closes on a buoyant note with a second play by Levine, “A Very Special Hanukkah Special.” Staged by Ledford, the comedy centers around Murray (Corey), a Jewish guy who wishes Hanukkah had as much of a showcase place in American culture as Christmas does. When a gruff toymaker named Max (Alvarez) helps his wish come true, familiar stories get revised. You’ll catch quick references to “It’s a Wonderful Life,” “A Christmas Carol” and other holiday favorites, with Jacobs as a Masterpiece Theater-style narrator, Adjan as Murray’s wife Kim, Patrice as a hapless boy and Garle as the renamed Judy Maccabee, a warrior princess with a Scottish accent (again, bravo to Tillman for Judy’s splendid costume and the many others he designed for the show).

The versatile acting company delivers, as Shorts troupes usually do, whether they’re navigating the sharp dialogue of the best plays or trying to bring more flawed pieces to life. In this year’s program, they do both.