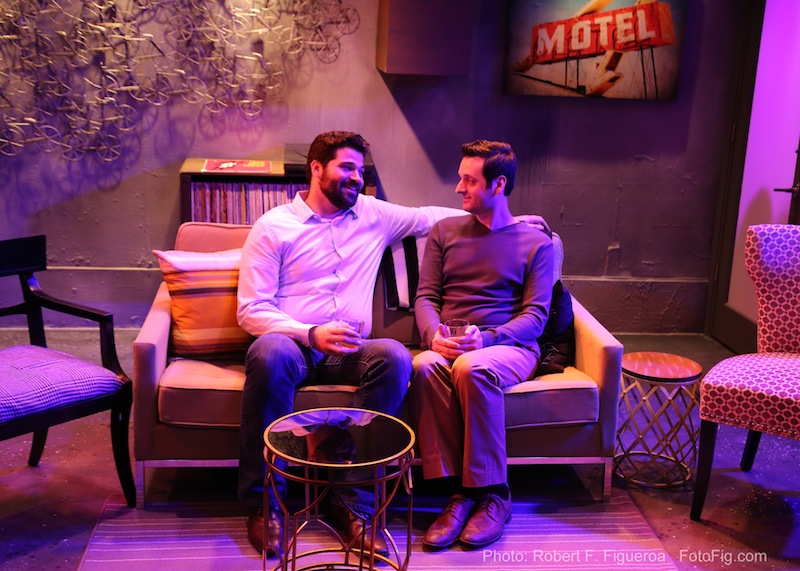 An intimate drama and a towering musical were named the best play and best musical of 2015 when winners of the 40th annual Carbonell Awards were announced on Monday during a show and ceremony at the Broward Center for the Performing Arts. Named for the late Cuban artist Manuel Carbonell, who designed the bronze award sculpture given to each winner, the Carbonells are South Florida theater’s highest honor.

Laced with warmth, humor and sorrow, the play about a committed gay couple at odds over getting married was also named best new work, and actor Antonio Amadeo received the Carbonell as best actor in a play for his performance as a partner confronted with tragedy in the Fort Lauderdale premiere. McKeever’s drama will get its Off-Broadway premiere in March 2017 as part of the Primary Stages season at the historic Cherry Lane Theatre.

Among musicals, the Maltz Jupiter Theatre’s inventive reimagining of Les Misérables was the evening’s big winner with four Carbonells. In addition to the award for best production of a musical, the show brought wins to actor Aloysius Gigl for his intense performance as the unyielding Inspector Javert; director Mark Martino, who found a way to make an epic musical seem intimate; and sound designer Marty Mets, whose revelatory work made every word and note crystal clear.

Lindsey Corey won the Carbonell as best actress in a play for her performance as a Russian stripper fighting to keep custody of her daughter in Zoetic Stage’s Miami world premiere of Christopher Demos-Brown’s Stripped.

Other winners in the play category came from two shows produced by Palm Beach Dramaworks in downtown West Palm Beach. Actor Paul Tei, founder and artistic director of Miami’s Mad Cat Theatre, was named best supporting actor for his performance in Sam Shepard’s Pulitzer Prize-winning Buried Child, and J. Barry Lewis took home a Carbonell for his direction of the play. For her performance as a desperate-to-wed schoolteacher in Picnic, Margery Lowe was chosen best supporting actress in a play.

Ragtime, the grand-scale Actors’ Playhouse musical of 2015, brought two Carbonells to the Coral Gables-based company: best actress in a musical for her performance as Mother to Melissa Minyard, and best musical direction to veteran musical director and pianist David Nagy.

Shane Tanner, currently appearing in GableStage’s A Minister’s Wife, won his first Carbonell Award as best supporting actor in a musical for his shattering performance as Jud in Oklahoma! at the Wick Theatre in Boca Raton. Elizabeth Dimon was named best supporting actress in a musical for her work as the supportive grandmother in the Maltz Jupiter Theatre’s Billy Elliot, and choreographer Greg Graham won the Carbonell for the blend of ballet and Broadway he brought to the show.

In addition to Les Miz’s Mets, the winning designers honored for their work in 2015 were scenic designer Victor Becker for The History Boys at Dramaworks, lighting designer Jeff Quinn for Constellations at GableStage and costume designer Brian O’Keefe for Les Liaisons Dangereuses at Dramaworks.

The Carbonell for best ensemble, which can go to the cast of a play or musical, was won by the actors in the Maltz Jupiter Theatre’s searing production of David Mamet’s Glengarry Glen Ross.

In celebration of the 40th anniversary of a program that began with a South Florida Entertainment Writers’ Association awards gala at Hollywood’s Diplomat Hotel in 1976, the Carbonell board gave out nearly a full slate of the organization’s special awards.

M Ensemble co-founders Patricia Williams and Shirley Richardson were recognized with the top honor, the George Abbott Award for Outstanding Achievement in the Arts, for their 45 years of leadership in running the region’s oldest continuously operating professional theater company.

Miami’s City Theatre, producer of the popular annual Summer Shorts Festival for two decades, received the award named for the late Miami News critic Bill Von Maurer, recognizing the company’s dedication to short-form plays and new play development. Actress Harriet Oser, in recognition of her outstanding work done on South Florida stages since 1979, was given the award named for the late South Florida actor Bill Hindman. Christine Dolen, who wrote for the Miami Herald for four decades, received the award named for former Miami News editor and historian Howard Kleinberg, in recognition of work in promoting South Florida theater to the world at large.

The $1,000 Carbonell scholarship awards, rechristened in honor of the late Sun-Sentinel theater critic and awards founder Jack Zink, were given to Mary Biggins of the Alexander W. Dreyfoos School of the Arts in West Palm Beach, Katerina McCrimmon of Miami’s New World School of the Arts and Carlo Felician Ojeda of Nova Southeastern University in Davie.

By the numbers, theaters in Palm Beach County dominated, winning 13 of a total 20 Carbonell Awards, with a dozen shared between the Maltz (with seven) and Dramaworks (with five). Miami-Dade theaters won four, and all three of Broward’s Carbonells went to Daniel’s Husband.

The most surprising (many would say baffling) shutout happened to Fort Lauderdale’s Slow Burn Theatre, which just closed its celebrated production of Spring Awakening in the Broward Center’s Amaturo Theater, site of the Carbonell show and ceremony. Going into the evening, Slow Burn had 15 nominations, the most of any company after the Maltz’s 21. But all of its nominees went home empty-handed.