‘White Guy on the Bus’ Tackles White Privilege, Wealth Inequality and Other Red Hot Topics of the Day 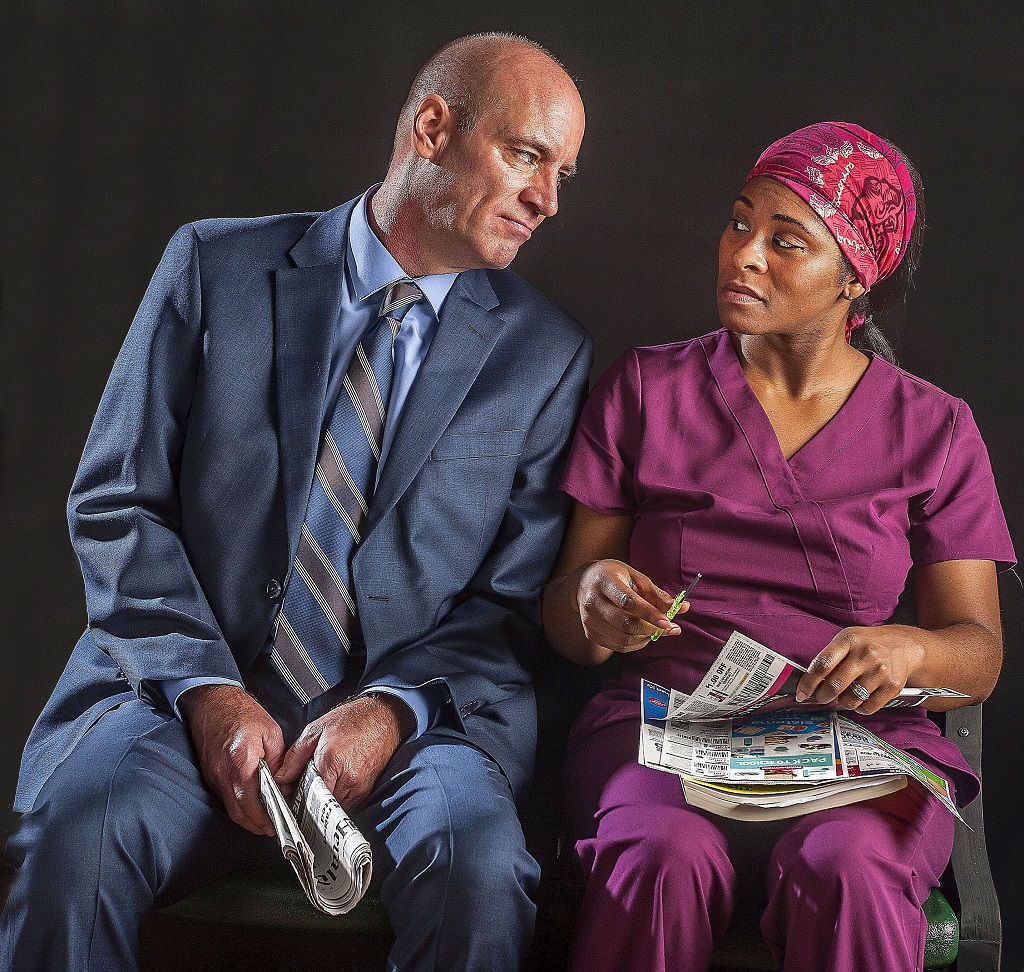 The cancer of racism goes to the bone in Bruce Graham’s “White Guy on the Bus,” the searing and shocking play that opened at GableStage over the weekend.

For the third time in a row, artistic director Joseph Adler has chosen a script that, after some conversation to establish characters and situations, turns a corner to make audiences gasp.

First came Branden Jacobs-Jenkins’ “Gloria,” about workplace violence and the monetizing tell-all books that follow. Then Halley Feffer’s “I’m Gonna Pray for You So Hard” served up a domineering father and ambitious daughter in a deeply dysfunctional relationship that ultimately flips.  Now it’s “White Guy on the Bus,” which shrouds its beginning in mystery, then pushes theatergoers back in their seats – hard – when it takes a turn.

Adler has turned over directing duties this time to Carbonell Award winner Michael Leeds, associate artistic director of Island City Stage in Wilton Manors.  Leeds, who is also a playwright, is a director with great artistic prowess, and he manages the shifts in time and place – as well as the drama’s fierce dark twists – with fluid skill.

“White Guy on the Bus” is one of those plays with carefully placed secrets and intricately timed revelations, and anyone who shares spoilers should be drawn and quartered.

Here’s what you can know in advance, though.

Ray (Tom Wahl), a wildly successful financial consultant, lives in a beautiful home on Philadelphia’s Main Line with his wife Roz (Mia Matthews), a dedicated teacher in a tough neighborhood. Roz is so good at her job that she’s a finalist for national teacher of the year – though with typically sardonic humor, she assures her nearest and dearest that she won’t win.

Ray and Roz frequently see their friends Christopher (Ryan Didato) and his fiancée Molly (Whitney Grace). He is a former neighbor who became their surrogate son, an academic preparing to pitch a Ph.D. dissertation on male African-American images in television advertising. His bride-to-be is also a teacher, but she works in an upscale suburban school. Though Roz and Molly share a profession, a truth about Roz’s work life – how many times a day her students will call her “white bitch” – is completely alien to Molly’s classroom experience.

The fifth character in “White Guy on the Bus” is Shatique (Rita Joe), a black nursing student with a chaotic family life. The single mom has sent her nine-year-old son to live with her mother in a less dangerous neighborhood, and Shatique uses her precious “free” time on the weekend to visit her brother, a prisoner doing life.

Ray and Shatique meet when he begins regularly riding her bus and chatting her up. This obviously affluent white man won’t say at first why he’s aimlessly riding the bus through the inner city. But as it happens, his meeting with Shatique is anything but random. He wants something, and it’s then that “White Guy on the Bus” takes its disturbing turn.

Graham’s play explores overt racism, subconscious prejudice, white privilege, the way wealth buys power. The script’s writing is rich, full of memorable lines, zingers, sudden turns to fury and violence. The particulars need to be experienced in the moment.

The cast is exquisite, with Matthews, Joe and Grace all making GableStage debuts.

Wahl and Matthews, who previously played husband and wife in the world premiere of Michael McKeever’s “After” at Zoetic Stage, are seasoned Carbonell-winning actors with a palpable chemistry.

Wahl’s Ray, seemingly bored with his privileged life and itching for change, transforms the most, and the actor handles his disturbing evolution with mesmerizing finesse. Matthews gets some of the play’s most incendiary, discomfiting lines, and she lobs them like a Wimbledon champion.

Didato takes Christopher from earnest to outraged, idealist to realist. Grace’s Molly is at first unsettled, then appalled by Roz’s pronouncements about her students’ limitations, but the actor makes it clear that Molly wouldn’t last a day in Roz’s educational environment.

In her relatively short South Florida career, Joe has worked at numerous theaters and delivered a succession of notable performances, most recently in M Ensemble’s production of August Wilson’s “Seven Guitars.” Her work in “White Guy on the Bus” is deeply moving, and she’s completely convincing as she portrays a weary and wary woman facing an excruciating choice.

Veteran GableStage set designer Lyle Baskin juxtaposes the play’s disparate worlds – the elegant terrace of Roz and Ray’s home, Christopher and Molly’s tasteful apartment, Shatique’s threadbare place in a rough neighborhood, and the two bus seats where Ray and Shatique have the conversations that lead to a chilling proposal. The fine work of costume designer Ellis Tillman helps clarify the play’s many shifts in time, as do the lighting design by Jeff Quinn and sound-and-music design by Matt Corey.

Some theatergoers may feel that what happens between Ray and Shatique stretches credulity. But GableStage’s superb production of this challenging, disturbing play about racism, economic inequality and more will get your mind – and heart – racing.