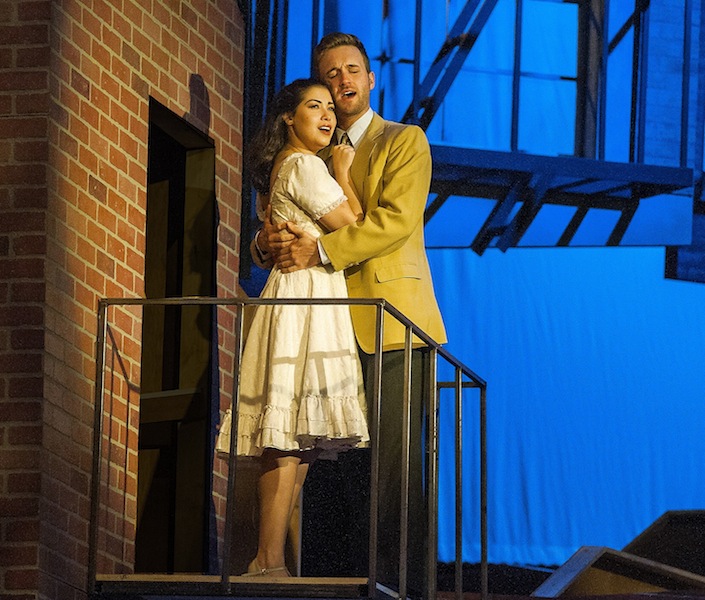 West Side Story has been – and continues to be – a musical theater piece that inspires extraordinary work from the creative team at Actors’ Playhouse in Coral Gables.

When the company first tackled the groundbreaking 1957 musical by composer Leonard Bernstein, book writer Arthur Laurents and a young lyricist named Stephen Sondheim, its 1997 production won seven Carbonell Awards, including one for best production of a musical and another for director David Arisco’s staging of the show.

Now Arisco and company have returned to the turf wars between the Sharks and the Jets, to that glorious Bernstein-Sondheim score, to a world of breathtakingly executed music and choreography. A new Actors’ production of West Side Story, a still-resonant vintage musical about the tragic consequences of mindless prejudice taken to violent extremes, is dazzling audiences all over again.

Arisco is again at the helm, this time collaborating with choreographer Ron Hutchins, who channels original director-choreographer Jerome Robbins and melds that style with his own creative ideas. In terms of movement, the result is thrilling, making West Side Story one of the best-danced shows South Florida has seen in many years.

Similarly, Arisco and musical director Eric Alsford have drawn exquisite vocal performances from the 27-member cast. Some of the numbers are just heartbreakingly beautiful: Tim Quartier’s Tony and Sarah Amengual’s Maria blending so stirringly on Tonight, Somewhere and One Hand, One Heart; Amengual and Isabelle McCalla as Anita flowing from the fury of A Boy Like That to the pained beauty of I Have a Love.

The performers, a blend of New York actors, regional theater veterans and South Florida-based talent, mine all of the turbulent tragedy, the giddiness and sensuality of love and, yes, the tension-relieving comedy in Laurents’ tale of a Polish-American Romeo and a Puerto Rican Juliet.

Amengual, a University of Miami grad who made her Broadway debut in 2010 as the replacement Maria in the Laurents-directed West Side Story revival, convincingly evolves from love-struck innocent to a grieving young woman unwaveringly loyal to her beloved. Quartier nearly shudders with excited certainty as he sings Something’s Coming, and he’s every inch the leading man-heartthrob that Tony should be.

McCalla is a fierce, feisty Anita opposite Marco Antonio Santiago’s macho Bernardo, and the two charismatically lead the Sharks and their ladies in the ever clever America.

Theo Lencicki is magnetic as Riff, the Jets’ leader and Tony’s lifelong best bud, and Jose Luaces plays Maria’s beau Chino as a mild-mannered contrast to the virile Tony.

Ken Clement is a menacing tough guy as the baldly racist Lt. Schrank, George Schiavone is a frustrated but calming presence as Doc, and Michael Freshko plays the famous-in-song cop Officer Krupke. That number, Gee, Officer Krupke, provides second-act comic relief from the show’s unfolding tragedy, and for some it will seem tonally jarring, even unnecessary. But as realized in this production, led by Drew Arisco’s Action and Karl Skyler Urban’s Big Deal, with amusing choreography from Hutchins, it’s a comedic gem.

Set designer Tim Bennett provides the necessary gritty urban environment for the show, Ellis Tillman an impressive array of ‘50s-style costumes (in reds and purples for the Sharks, blues and yellows for the Jets), Eric Nelson lighting that suggests moonlit romance or shadowy danger or halcyon fantasy.

Sound designer Shaun Mitchell avoids the mic problems that have bedeviled some of Actors’ big musicals, but the volume is sometimes cranked up so high that it nearly hurts to listen. Alsford and eight other musicians navigate Bernstein’s challenging score from the pit, acquitting themselves well on its driving jazz and Broadway ballads with the odd little flash of a klezmer band thrown in a few times.

That West Side Story should cut so deeply nearly 60 years after its creation is a comment on the ugly persistence of prejudice and a testament to the timeless achievement of a work of theatrical art. At Actors’ Playhouse, Arisco and company remind us of both.