Review: ‘We Will Not Be Silent’ Examines Last Days of Courageous Life, Speaks to Today 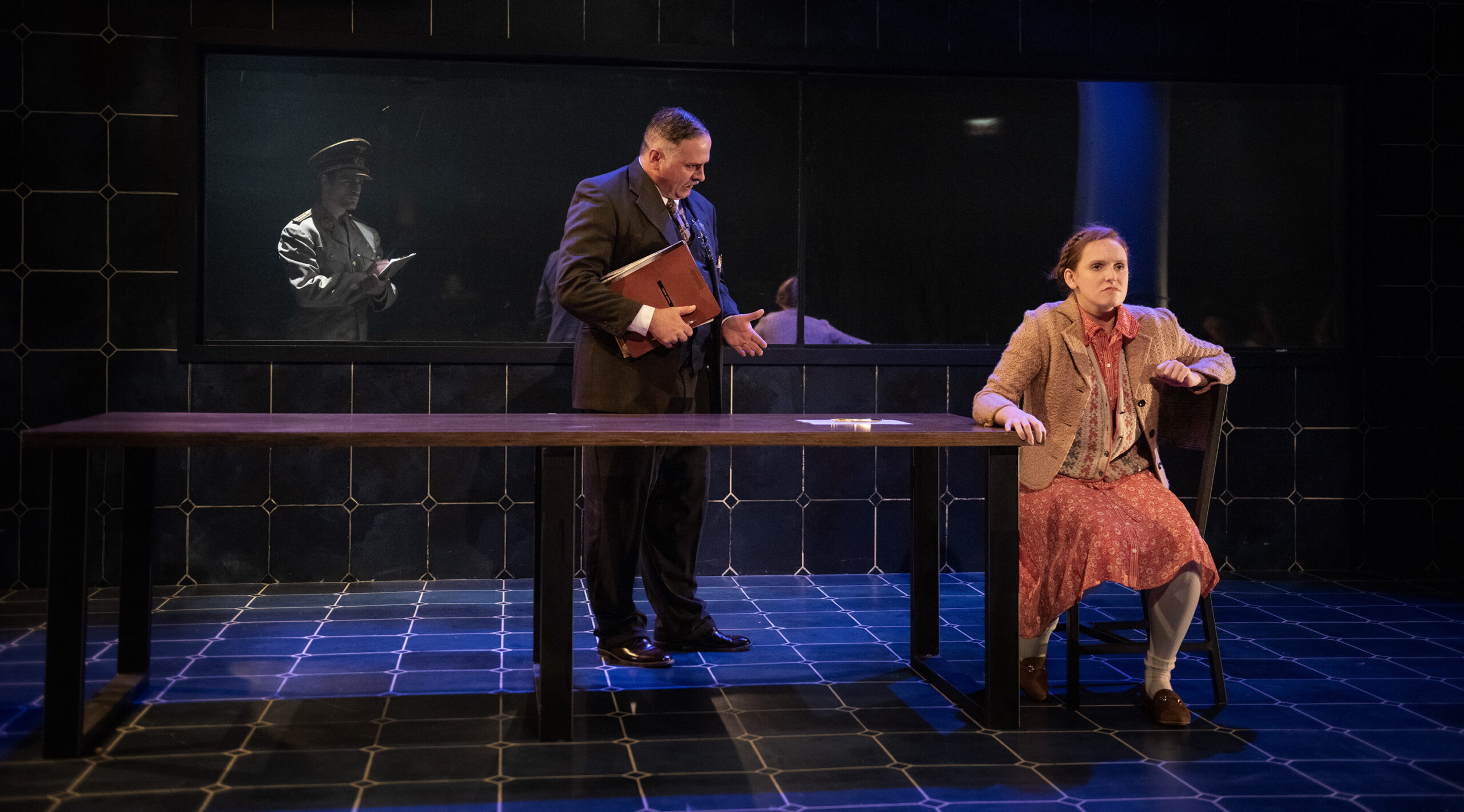 Jason Peck is Kurt Grunwald and Meredith Casey is Sophie Scholl in GableStage’s “We Will Not Be Silent” through Sunday, Jan. 29 at GableStage at the Biltmore, 1200 Anastasia Ave., Coral Gables. (Photo courtesy of Magnus Stark)

Imagine this:  You are a key part of a student group advocating nonviolent resistance to a brutal government.  A true believer sees you scattering pamphlets in support of your cause, and you’re immediately arrested. Within five days, you have been interrogated, convicted and executed.

That horrific scenario is precisely what happened in 1943 to Sophie Scholl, a student at the University of Munich and anti-Nazi activist in the White Rose movement.

Scholl and the White Rose have been the subjects of movies, docudramas, plays and books.  In 2015, playwright and actor David Meyers wrote “We Will Not Be Silent,” a play about the last brutal days of Scholl and her brother Hans.  After a developmental period, the play premiered in 2017, and it was produced at Boca Raton’s Theatre Lab in 2019. 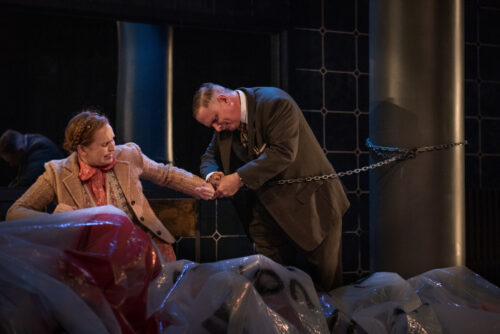 Jason Peck as Kurt Grunwald removes a handcuff tethering a frightened Meredith Casey as Sophie Scholl in GableStage’s “We Will Not Be Silent.” (Photo courtesy to Magnus Stark)

Now, with GableStage producing artistic director Bari Newport at the helm, “We Will Not Be Silent” is getting a new production at a time when having the courage to stand up to tyrants seems increasingly urgent.

Scholl embraced Nazi youth organizations as a child, as did her brother, despite the objections of their father Robert, who was later imprisoned for making an anti-Hitler remark to one of his employees.  The Scholl family was Lutheran. “We Will Not Be Silent” isn’t a Holocaust play per se, though there is a line about the dubious claim that the Nazis were “relocating” the Jewish population.

Soon, the siblings and their student friends began rejecting Nazi ideology, and Sophie focused on religion, philosophy, teaching children and the arts.  She also became active in the White Rose as the group found ways to get its pamphlets calling for resistance distributed in cities throughout Germany.

Facts about Scholl’s too-short life – she was guillotined at the age of 21 – are woven into “We Will Not Be Silent.” But Meyers has chosen to focus on the intense, frightening few days when a Nazi interrogator tried to get Scholl to confess to treason.

Scholl’s actual inquisitor was a Gestapo member named Robert Mohr.  Meyers has made the character a former policeman named Kurt Grunwald (Jason Peck), a man who shifts between playing good cop and bad cop several times during the course of the play.

Sophie (Meredith Casey) begins the play fiercely screaming, pulling down a semi-transparent banner painted with graffiti urging Germans to act against the Nazi regime.  Moments later, she appears distraught and chained to a fat golden pillar. Grunwald faux-apologizes as he removes her handcuff, then he awkwardly stuffs the banner almost out of sight.

What then unfolds on designer Frank J. Oliva’s mysterious set – its tiled walls and floor vaguely suggest a kind of cage – is a session filled with debates, lies, attempts at persuasion, deprivation, and torment both psychological and physical. 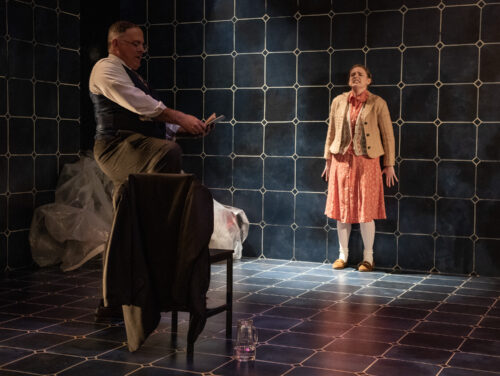 At first, Casey’s Sophie, her red hair done in youthful braids, claims to know nothing of the White Rose, and her demeanor is fairly convincing.  Peck’s Grunwald tries convincing her that he’s open to believing her innocence and her brother’s.  But before long, he pulls evidence from a folder and starts turning invisible screws as an anonymous Nazi watches from behind a window, documenting the discussion in his notes.

As Sophie is deprived of food, water and rest, and as Grunwald tries to persuade her that the others will be tried and executed, she tries to exonerate them by shouldering the blame.  Grunwald knows better, and in one awful protracted scene he forces her to stand with her back against the wall and her feet straight until her body begins shaking uncontrollably.

Hans (Bobby Eddy) does make an appearance, entering the space as an exhausted Sophie is lying fitfully on the floor.  Whether he is real or an imaginary presence born of her despair, this version of her brother is hale and hearty, which seems odd given Sophie’s condition.

Emotionally, Casey has the most to work with in the cast, and you ache for her Sophie when she makes statements that will obviously doom her.  Peck’s portrayal of Grunwald is so much the low-key “ordinary” German that it’s hard to buy him as a man who may help bring Sophie’s life to an abrupt end.

GableStage’s creative team has made the world of “We Will Not Be Silent” an eerie one, with whispering voices and unsettling music from sound designer Jason Peck. Victoria Murawski’s lighting is, by turns, harsh and haunting.  Costume designer Camilla Haith dresses Casey and Eddy in the sort of period clothing Sophie and Hans wore, and Peck’s nondescript three-piece suit suddenly looks more sinister with the addition of a swastika armband.

Meyers’s script is part discussion, part drama.  That makes Newport’s task as director all the more difficult: A 90-minute play feels longer than it is, and the tension flows and ebbs in a story that should have more of it.

If you don’t know Sophie Scholl’s story, “We Will Not Be Silent” may inspire you to learn more.  And with its chilling contemporary resonance, the play may also serve as a reminder that the courage to oppose tyranny isn’t relegated to one moment in history.

WHAT: “We Will Not Be Silent” by David Meyers

Music And Politics Mix In Two Movies Premiering at Miam...