‘Save the Bay’ PSA contest has a message – and a winner! 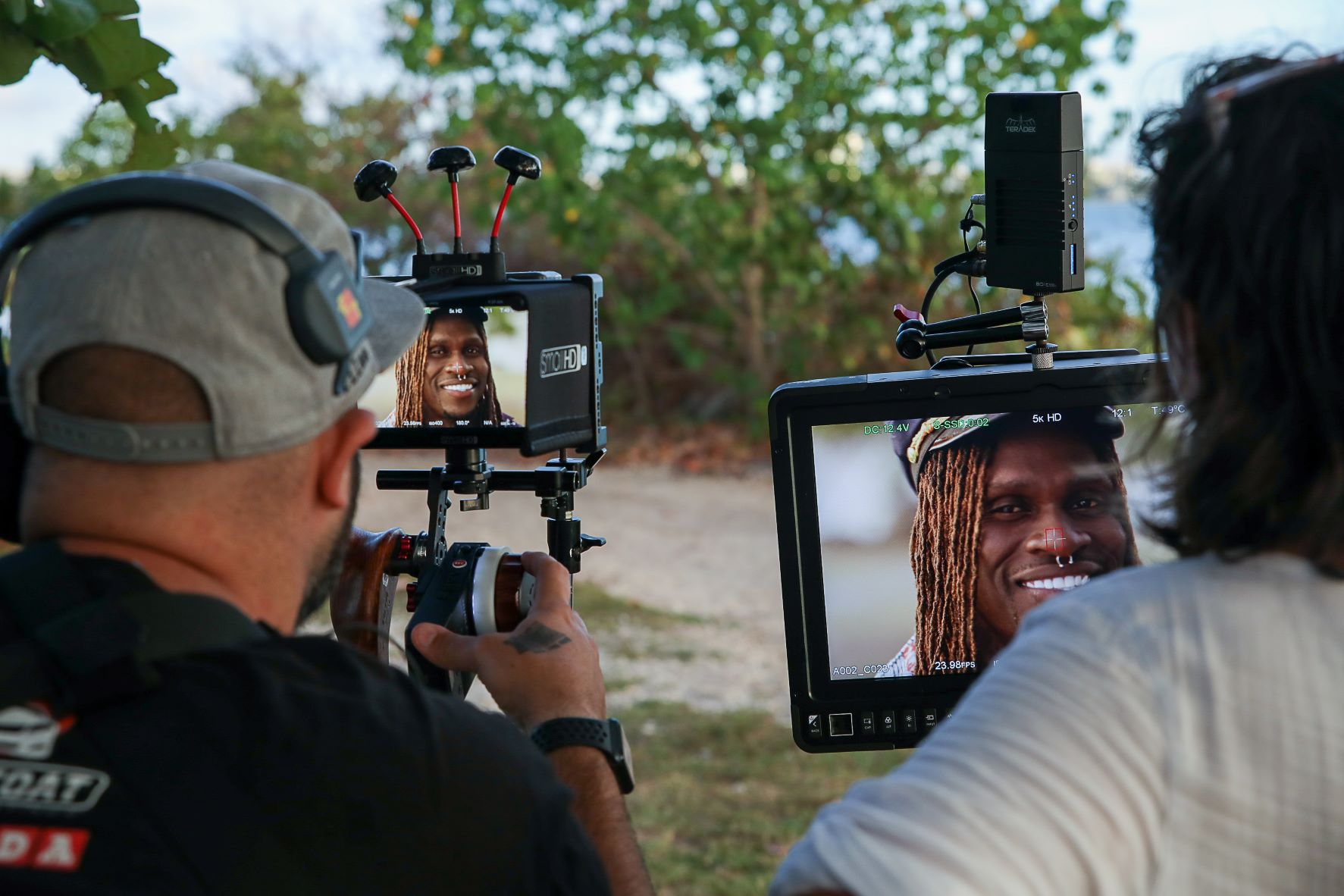 A small crowd gathered in the online waiting room.

Oolite Arts greeted the participants in a chat window and urged them to introduce themselves. A steady stream of salutations, friendly banter and comments on chosen beverages for the evening (pear juice with a shot of Haitian rum) followed.

“Let’s get this party started!” wrote another.

After much enthusiasm, a momentary lull descended as Oolite Arts cinematic arts manager Danielle Bender appeared on the screen.

“Good evening, everyone. Thanks for joining us for the Save the Bay PSA screening, where we will unveil our 1-minute PSAs about Biscayne Bay,” she said.

The public service announcement videos are the result of Oolite Arts’ open call for submissions, and five finalists each received $2,500 to produce pieces highlighting the plight of Biscayne Bay, thanks to funding by the Lynn and Louis Wolfson II Family Foundation.

Oolite Arts launched the contest in cooperation with Miami-Dade County and its chief bay officer, Irela Bague, with the aim of shining a spotlight on South Florida’s once-pristine bay, which suffers from hypersalinity and a host of contaminants including sewage spills, fertilizers and other plastic pollutants.

The public had the chance to cast their vote through Aug. 11 and choose their favorite from the group of five PSA finalists and three honorable mentions. (The honorable mentions each received $1,000 for their proposals.) Hundreds of filmmakers submitted their ideas and, judging by the vibrant chat screening on July 28, viewers responded enthusiastically as well.

“When you use an independent jury, comprised of professional filmmakers, you’re bound to get a wonderful winner,” said Dennis Scholl, president and CEO of Oolite Arts.

The People’s Choice Award went to Alexa Caravia’s “Video Letter.” She received $1,000 as part of the prize.

Interested filmmakers who missed this contest have another chance to throw their hat in the ring.

“Given how much everybody has loved this … we announced [during the screening] that we’re going to do it again,” Scholl said.

This time, Oolites Arts is teaming up with the City of Miami Beach to host a Sustainability in Action PSA video contest, with funding from the Wolfson foundation. The finalists, who will receive a $2,500 production budget to persuade residents to reuse and conserve, will have their video featured at a public screening in November at SoundScape Park. The deadline to submit a pitch is Monday, Aug. 16.

For those willing to tackle the project, Scholl offered some advice: “Filmmaking is a difficult process. You’ve really got to show us in your application that you have the ability to make the film.”

When you combine both professionalism and passion, he said, the two become unbeatable.

“When you put those two things together … you get magic.”

Below is a sneak peek of the five winning finalists. 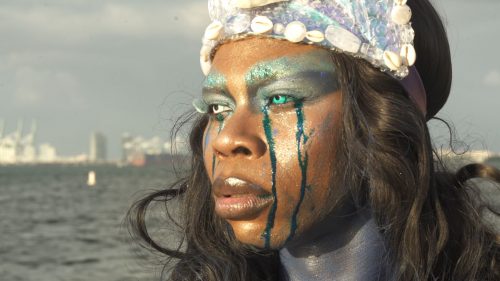 Opal Am Rah stars in “The Siren.” (Photo courtesy of the artist)

An ebony face manifests grief, with emerald-green tears streaming. Transfixed, you watch the mermaid’s mournful dance. It is a dance meant to capture the pain of Biscayne Bay.

“How did we come this far? What happened?” said Helen Peña, creator of the PSA entitled “The Siren,” in an interview. “You could once drink directly from the water. It’s just mind-blowing that it was freshwater and that once the waters were crystal clear.”

Billed as a “a black feminist reminder and a black feminist awakening,” Peña’s ad pays homage to Haitian Vodou spirituality — and to one Haitian artist, in particular, as its inspiration.

“I’m Dominican, and so I honor the relationship between our siblings on the island,” she said. “I was inspired by the Haitian community’s depictions of La Sirene and Haitian Vodou flags (drapos), and also by the art of Edouard Duval-Carrié, where he depicts a lot of water spirits, animals and lively personalities. They’re blue and purple but they almost glow in the dark.

“I was really inspired by those visual references, and particularly the use of a really deep royal blue, almost like glitter,” she continued.

The eye-catching assortment of colors used in her piece collectively has a spiritual reference as well: “It alludes to all of the water spirits at the depths of the ocean.”

Peña hopes “The Siren” and the ad campaign will help to plant the seeds of change. 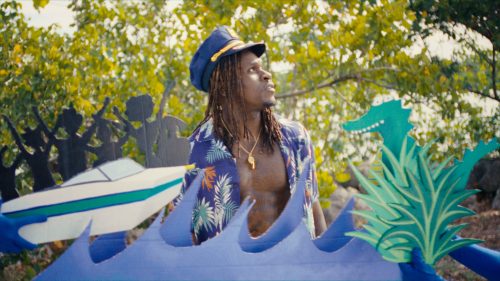 A charismatic and charming Jeano Michel stars in the titular role of Captain BayWatch in this laugh-out-loud PSA meant to nudge residents into taking better care of their environment.

Its creator, Jayme Gershen, is a firm believer that employing humor and finding common ground among viewers are instrumental to getting a message across. In the video, to the audience’s delight, Michel riffs on the issues in English, with a sprinkling of Haitian Creole and Spanish phrases.

“I think that humor wins hearts and minds,” Gershen said. “With a serious topic that relates to everybody, I was thinking, how do we reach all these pockets in Miami: Young. Old. Rich. Poor. Haitian. Latino. Gringo. The Miami bro. The tourists. The homeowner. How do we make everybody laugh?

“And I really think that sometimes when we go at things with humor, [it reaches] people a little more than banging them over the head with everything that we do wrong.”

When it came to shooting techniques, Gershen looked to another PSA: “In my proposal, I referenced the American Airlines safety video. I just loved that video. It is such a great way to teach people and engage them. And that video is a masterpiece at working with a lot of mirrors, with a big crew behind you. It’s tricky as hell.”

The project taught her a lesson in perseverance — and reiterated for her the importance of teamwork.

“Filming an outdoor PSA in the summer is not easy. It’s hot and wet,” she said. “We planned this thing to a tee … and then the day we did it … it rained all day. So that was a lesson in patience and adapting and making it work. It was just amazing how people showed up to help. I didn’t do this alone, and I couldn’t have done it without everyone putting all hands on deck.”

Though Gershen definitely has fans in her immediate circle, she admitted that one relative wanted to keep an open mind about his favorite: her 9-year-old nephew, who helped out on the set.

“He said, ‘I would have to watch the other PSAs, just in case,’” Gershen said. “I hope he thinks it’s worth it!” 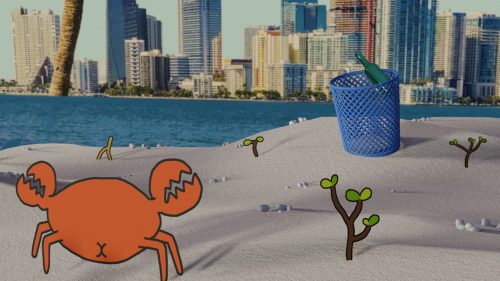 (Photo courtesy of the artist)

Milly Cohen: ‘Save the Bay’

Showing animated scenes from Florida’s ecosystem, this PSA aims to spur residents to actively participate in protecting the environment.

“I want people to really dive deeper and see what they can do in their community to help the bay. This video is meant to be a catalyst for you to dive deeper,” Cohen said. “You can join a beach cleanup and maybe even donate to some organizations that support Florida wildlife and the environment … I strongly believe that people can make a difference in their day to day.”

As long as we remain vigilant, Cohen believes that circumstances are bound to improve.

“I want people to know that even if things look bad, ocean life is very resilient,” Cohen said. “I also think it’s a beautiful thing that there are people who are really dedicated towards making that happen. If the surrounding community kind of just tags along and follows that lead, then this could be a really powerful movement. We should all be optimistic about the future of the bay.” 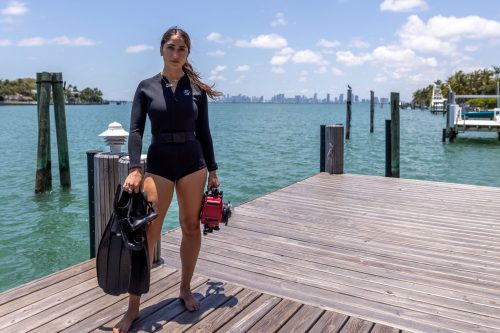 Shireen Rahimi in ‘What Happened to the Bay?!’ (Photo courtesy of the artist)

Shireen Rahimi: ‘What Happened to the Bay?!’

Shireen Rahimi teamed up with Maxx McInerney to deliver a visually captivating photographic testimony on how pollution and neglect affect the natural beauty of Biscayne Bay.

“This is a great opportunity because I had funding for it, and it was something that I really cared about,” Rahimi said. “It was really fun to have that creative freedom and to put my time into making something that I hope will have an impact.”

In the PSA — entitled “What Happened to the Bay?!” — Rahimi is seen diving into the bay and documenting her underwater surroundings. Though well-acquainted with the area’s obstacles, she said she was stunned with what she learned while producing this project.

“It was really shocking to me to see was how much construction had had such a negative impact on the bay,” said Rahimi, referring to dust and debris spilling into waters.

To bring their message home, they duo decided to largely focus on highlighting the gorgeous underwater landscape beneath the waves of the bay, but they encountered a snag in their plans.

“We went out to film, and we were trying to look for a dock that we thought was there and it wasn’t,” Rahimi said.

They ended up knocking on a stranger’s door. Luckily, they found a fan.

“We asked if we could use their dock because it looked really nice from what we could see,” Rahimi said. “The guy was super-helpful and super-enthusiastic. He was like, ‘I love the bay. I spend so much time there and I want to do whatever I can to help.’ 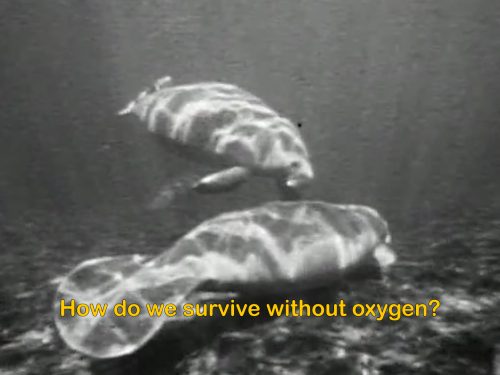 (Photo courtesy of the artist)

A mesmerizing voice from the past is sounding the alarm on Biscayne Bay’s future.

In “Video Letter” by Alexa Caravia, black-and-white archival footage collides with colorful long-range shots of sailboats and a closeup of a dead fish floating in the sea. What feels very much like a documentary doubles as a love letter from someone who is desperately trying to warn her unborn grandchild about the delicate imbalance of the bay.

“What I wanted to do was create a piece that would encourage a reflection on our connection to the bay,” Caravia said. “I thought that the most effective way to do that would be to provide a visual documentation of [its] changing face.”

Caravia tapped into Miami Dade College’s Wolfson Archives for the images she needed: “Since I don’t have an underwater camera, I had to … find that footage and let history tell itself.”

The narration of the piece was also a key element, so she drafted Elizabeth Calella, her unsuspecting next-door neighbor, to help out.

“It was really at the last minute. I just walked over there at the 11th hour and asked her if she could do it,” Caravia said.

Calella, who does voiceovers, often spends evenings with her husband watching the sun set over the bay. “She loves the bay as much as I do!” Caravia said.

Having grown up fascinated by the water and marine life, Caravia jumped at the chance to make a PSA.

“When we see the bay from afar, it looks so idyllic and so serene, and we sometimes tend to ignore the chaos that’s happening underneath,” Caravia said. “We have an awesome responsibility. [The bay] surrounds us. It sustains us. It’s our city. It’s life here in Miami.”

Check out all the “Save the Bay” ads at oolitearts.org/save-the-bay.

Submit pitches for the “Sustainability in Action” contest by 6 p.m. Aug. 16 at oolitearts.org/sustainabilityinaction.