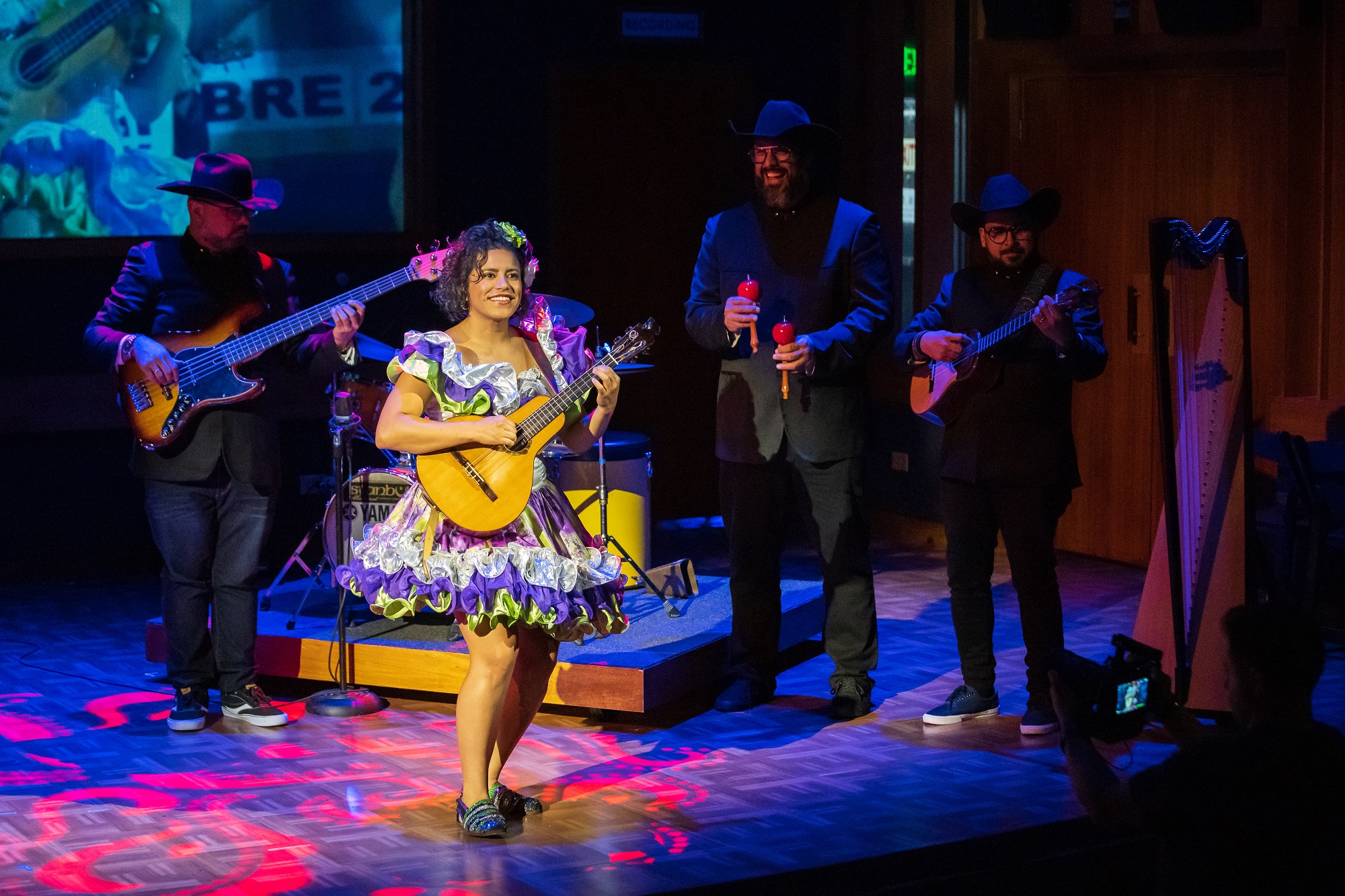 Mafer Bandola explains her musical evolution in a short-ruffled dress, the same costume she wore as a youngster, in Miami New Drama’s “Papá Cuatro.” (Photo courtesy of Chris Crass)

In Miami Beach, Miami and Coral Gables, July has become a focal month for theater by and about Latinx artists. Some shows are in Spanish, others in English.  Some artists were born here, others are visiting, still others are living as exiles or immigrants.

For anyone eager to experience the wealth of multicultural artistry that makes theater here so distinctive, Miami New Drama’s “Papá Cuatro” is a thrilling place to start. 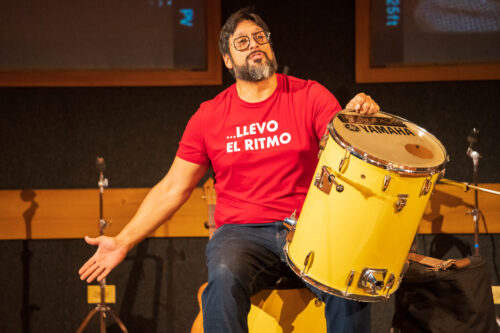 The company’s second world premiere collaboration with Venezuelan-Canadian director Juan Souki (after 2019’s “Viva La Parranda!”) celebrates the talents and stories of five musicians who have become part of the Venezuelan diaspora.  It is quite different from “Viva La Parranda!,” a folkloric exploration of village culture, music traditions, and cuisine that Souki crafted with performer Betsayda Machado.

“Papá Cuatro” takes as its unifying sound and symbol the four-stringed cuatro. Resembling a small classical guitar, the traditional cuatro in considered the national instrument of Venezuela. And indeed, the cast members share photos of themselves learning to play the cuatro as kids, though the percussionist jokes: “My name is Adolfo Herrera, and I am not a cuatro player. I am the cuatro’s drummer.” 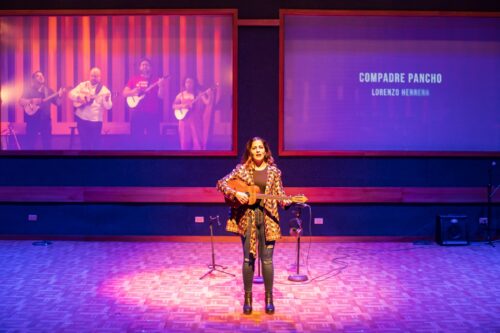 Director Souki, who conceived and assembled the show, interviewed the performers and assembled their personal stories into a script. The result is a musical-documentary of sorts that conveys the influences of family and cultural traditions, the trajectory of dreams and success, and the myriad challenges of starting anew after politics and violence made staying in their beloved Venezuela impossible.

Speaking, singing, and playing, the artists convey their personalities and backstories, with projection designer Fernando Mendoza illustrating some of their words with videos and family photos.

In regard to the latter, some of Herrera’s are particularly mind-blowing:  His mother Gloria, who was a militant Venezuelan communist in the 1960s and ’70s, is pictured with the Dalai Lama.  His grandfather Humberto is seen posing with Mao Tse Tung. It was on his parents’ second trip to China, in 1979, “where they truly realized, 40 years ahead of all Venezuelans, that communism was going nowhere,” he says, grinning.

The radiantly beautiful Semprún – who starred in the Venezuelan TV show “La Popular Shirley” performed for huge concert, opera and theater audiences, and recently did the Telemundo Global series “Malverde: El Santo Patron” – talks about coming to Miami with her writer-husband Leonardo Padrón to prepare for their musical “Edith Piaf, Voz y Delirio.” An airline employee called her to say the SEBIN, or political police, kept asking when the couple would be returning to Caracas. They never did. 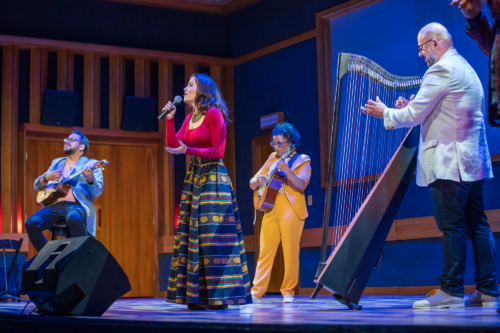 Herrera, who has a knockout singing voice, pulls off an adroit balancing act of keeping things amusing while underscoring the realities of what being an artist in exile means.  He puts together a drum kit while storytelling, talking about cleaning up construction debris at the Venetian Way condo owned by the father-in-law of a Venezuelan radio host who interviewed him many times.  He’s happy with his wife and two kids at their home in Kendall. He plays with the Miami Symphony Orchestra, the Raices Jazz Orchestra and has contributed to five Latin Grammy-nominated albums. He has perspective.

“The migratory experience has offered me those crazy moments where people rediscover you: ‘Hey, man, you’re a beast. You could dedicate your life to this,’ ” Herrera says.

Betancourt speaks of working construction, playing in restaurants and driving for Uber before getting hired to teach – Spanish, not music. He recounts his difficulties with revisiting the rules of grammar and does a good job of trying on other accents, Cuban and “gringo.” Today, he’s a special education teacher’s assistant at a Boston school.  In “Papá Cuatro,” playing Juan Vicente Torrealba’s “Concierto en la Llanura” and other songs, he proves himself one of the most moving and masterful harp players anywhere.

Siso shares what sounds like an improbable tale of emigrating from Venezuela to Ireland, of starting out in an Irish pub, playing in a Latin band with a Cuban lead singer, and winning the Latin Grammy for “Identity,” his farewell album to Venezuela.  Though he could not celebrate with family in his homeland, Irish President Michael D. Higgins had him over for dinner – Soto shows us the photos.

All of this is after his blistering cuatro rendition of Consuelo Velázquez’s “Bésame Mucho,” which is anything but dreamy. 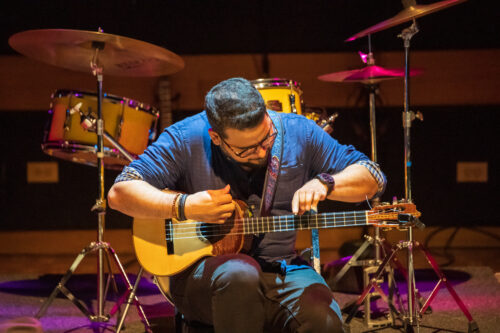 Bandola recounts the traditional – sexist, if you will – teaching methods of the great Carlos Hidalgo as she learned the bandola in a class that was all-male.  Later she shares her experiences competing in the Festival Internacional de Música Llanera El Silbón, in which she had to dance, sing, recite and play the bandola, all while wearing the short-ruffled dress from her childhood in green and purple (her favorite colors), brought from Venezuela. It’s complemented by a flower headdress and sparkle-bedecked shoes. The show’s other costumes are the work of designer Angela Esposito.

Bandola, fierce and powerful as she plays, eventually concluded that her instrument’s male-dominated culture probably wasn’t the best way for her talents to flourish, so now the songwriter and activist performs with the four-woman multinational band Ladama.

With vivid lighting by Ernesto Pinto and crisp sound by Javier Casas, “Papá Cuatro” is already an impressive, enlightening, and thoroughly enjoyable piece of musical theater. 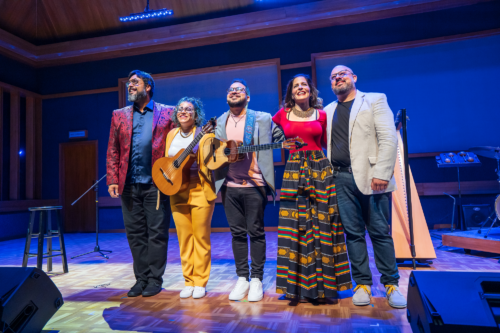 Because each performer gets two solo segments, however, the show runs long – two hours with no intermission, though a break is listed in the program.  Some precision trimming and restructuring could make the piece even more powerful, though there’s no denying that each time someone says his or her name and adds “…and I am an artist in exile,” you feel overwhelming sorrow.  Yet you are thrilled, sometimes overwhelmed, by the sheer talent and determination of such remarkable musicians.

Miami New Drama’s core mission is making theater that reflects and connects with South Florida’s diverse array of communities.  “Papá Cuatro” resoundingly does that for the region’s Venezuelan residents, but even if your background is different, even if you don’t speak Spanish, you’re missing out on theater and music that will move you. Culturally, this is a place of many treasures, and “Papá Cuatro” is one of them.