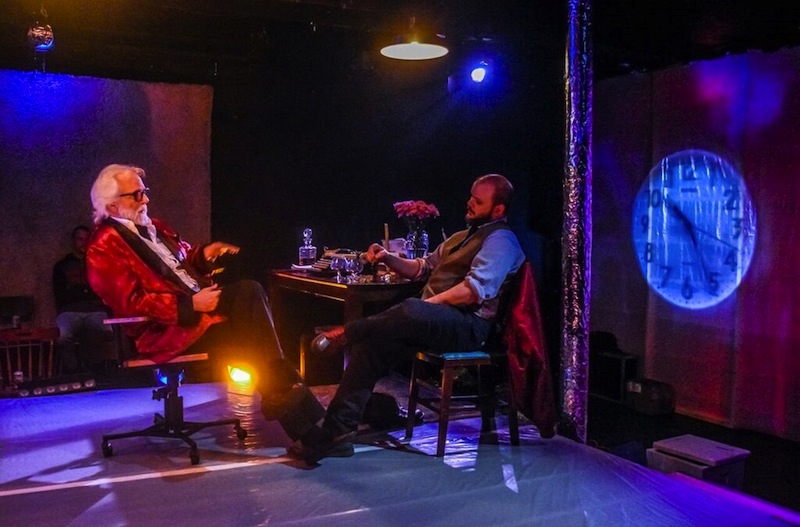 Sales of George Orwell’s chilling dystopian novel “1984” have soared during the early days of the Trump administration, the headlines pouring out of Washington having repositioned a 1949 literary classic as a 21st century cautionary tale.

The late Czech president and playwright Václav Havel brought his deeply observed, hard-earned perspective on life under totalitarianism to the stage in more than two dozen plays. In a trilogy of one-acts known as the Vaněk plays, Havel utilizes an alter ego – playwright/dissident Ferdinand Vaněk – to illustrate the minefields of daily life during four decades of Communism.

Two of those plays, 1975’s “Audience” and 1978’s “Protest,” are onstage now in Miami Shores, thanks to Mad Cat Theatre Company’s double bill in the SandBox at Miami Theater Center.

And yes, Havel’s plays about courage and conscience,compromise and acquiescence, resonate resoundingly at this moment in American history.

As it always does, Mad Cat has transformed the black box space into a world suited to the production – in this case, a claustrophobic place in which theatergoers watch not just the plays but each other.

Aluminum foil skirts the raised central platform where the action takes place (tin foil hats, anyone?), the lights blink off then suddenly on after the first piece is already underway, and both the audience and actors have to push through a slit in hanging plastic to enter or leave the SandBox. Concealed from view, actor Erik Fabregat sings two Beatles songs from the Prague Spring era as well as “Alcohol” by the Kinks before and between the plays, at a volume that keeps conversation down.

Credit goes to artistic director Paul Tei and David Nail for the immersive set, Nail for the darkly mysterious lighting palette, Matt Corey for the sometimes-ominous soundscape, and Deborah L. Sherman for costumes and makeup that define the “real” world of “Protest” and the theatrical one of “Audience.”

Though written later, “Protest” is presented first. Playing Vaněk, Fabregat goes to visit an old friend Stanek (Michael Gioia) at the latter’s comfortable country home. As a writer for state television, Stanek is in solid with the government; Vaněk, like Havel, is a dissident playwright with prison terms behind him.

The contrast between the two men is both superficial and deep. Stanek wears an elegant smoking jacket and slippers, sips brandy, urges peanuts on his friend. When a reluctant Vaněk gives in to Stanek’s repeated suggestion that he take off his old boots to wear another pair of the host’s slippers, we see a sizable hole in the toe of the ex-prisoner’s sock.

Vaněk’s mission reveals the deeper differences in the men. He has arrived with a petition urging the release of an imprisoned singer – who, as it turns out, is the father of the baby being carried by Stanek’s daughter. Vaněk has collected 50 signatures but wants one more: Stanek’s.

Under Tei’s direction, Fabregat stays cool, non-confrontational, observant, logical. Gioia’s Stanek, on the other hand, practically turns himself inside out trying to have it both ways: He wants the respect of Vaněk and his fellow dissidents, wants to use their courage for his personal purpose, but is unwilling to risk his security, despite his talk to the contrary.

There’s a brief mention in “Protest” of Stanek having seen one of Vaněk’s plays. So for “Audience,” director Theo Reyna places Fabregat and Gioia in the audience, where they watch another Vaněk piece inspired by Havel’s experience.

Here, the Brewmaster (Peter Joseph Smith) has summoned Vaněk (Noah Levine) from the chilly brewery basement, where the former prisoner is forced to work rolling beer barrels. Vaněk remains on edge as his brute of a supervisor pours him beer after unwanted beer, asking questions about his plays and one actress in particular. When the Brewmaster leaves to visit the bathroom – often, since his level of beer consumption is constant – Vaněk hastily tips the contents of his own glass into the foreman’s.

In conversation that is deliberately circuitous and repetitious, it emerges that the Brewmaster wants Vaněk to spy on himself, a job heretofore done by the supervisor. Always, the government is observing, recording, collecting potentially damning evidence. So why not eliminate the middle man?

Though the actors had to call for lines a few times on opening night, “Audience” is the livelier of the two pieces, viscerally as well as intellectually engaging. But like most significant plays, “Audience” and “Protest” transcend the specifics of time and place to speak to us – and warn us – anew.