Three Plays in One Day: ‘The Hammer Trinity’ at Arsht 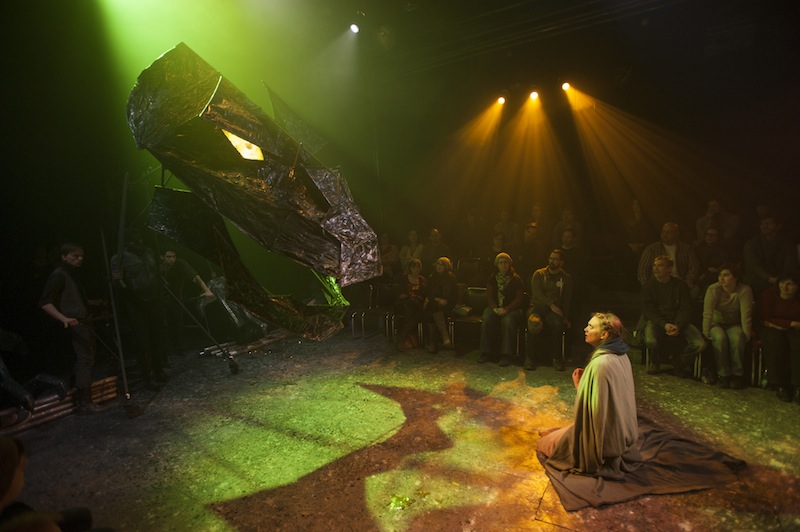 Miami is about to get a marathon – and no, it’s nothing like the one in January that had competitors from all over the world running from Miami to Miami Beach and back.

This marathon is powered by art, by the belief that actors and audiences who dive deeply into a shared storytelling experience are undertaking a theatrical adventure. In a world geared to shrinking attention spans, where 90-minute intermission-free plays are now something of a norm, the House Theatre of Chicago’s The Hammer Trinity may sound daunting.

Running April 2 to May 8 on Saturdays and Sundays in the Carnival Studio Theater at the Adrienne Arsht Center for the Performing Arts, the marathon (one of the Arsht’s 10@10 anniversary commissions) involves three separate plays performed from 1 p.m. to 10:30 p.m. That time span includes about six and a half hours of performance, plus three hours of carefully timed breaks (including an hour for dinner, with special on-site offerings).

The cost? Marathon tickets are $150, just $25 more than the top Saturday night ticket price for the Arsht’s next touring Broadway show, Cabaret. (The $50-per-show cost is in line with tickets to the other offerings in the Arsht’s Theatre Up Close series at the Carnival; in Chicago a year ago, the marathon tab was $65.)

The three plays of The Hammer Trinity – The Iron Stag King, The Crownless King and The Excelsior King – are by House artistic director Nathan Allen and company member Chris Mathews, who appeared at the Arsht last season in the House’s The Magnificents.

“I really have come to understand this as a kind of capstone of a 15-year project of investigating mythology and our moment and how mythology can be used to being a deep understanding among diverse people,” says Allen, whose company has returned to Miami every year since bringing The Sparrow at the Arsht in 2011. “This is what we have learned. This is everything.”

The Hammer Trinity isn’t the first time the House has created linked plays. From 2004 to 2006, the company produced Allen’s The Valentine Trilogy, stylistically different musicals (the first a western, the second set in feudal Japan, the third in 1930s Chicago).

“We recognized what a rallying point of energy that could be,” Mathews says. “We’ve always tried to do what shouldn’t be possible.”

With the Hammer Trinity, Allen says, “we felt we could do something huge. Scale became the challenge. We wanted to live in that world for a day and provide depth and breadth for the audience.”

Allen describes the ideas behind the trio of fantasy-adventure plays as a way to talk about American identity that isn’t political.

“If King Arthur is the origin story of the United Kingdom set in a parallel Great Britain, this is an attempt to tell the American mythic story with a bunch of orphans, a magic hammer and a dragon puppet voiced by Tracy Letts,” the director says. “We’re so much younger, and our mythology is a bit more fraught.”

The journey follows Casper Kent (Kevin Stangler), the orphaned farmer urged by a storyteller to seek the Hammer – this tale’s version of Excalibur – and lift it, proving he’s the true king of the fractured land. The three-part quest involves pirates, a beautiful archer, a gunslinger, villains, rebels, dragons, evil and battles aplenty.

The House premiered the plays one by one, The Iron Stag King in 2012, The Crownless King in 2013 and The Excelsior King a year ago. Chicagoans could see the individual plays or choose a marathon, but Allen now thinks the marathon is the only way to go. “In coming for the day and adventuring with your community, you have such a deep experience. You fall in love with the characters, fall out of love. It’s a roller coaster, and there’s such a narrative ride,” he says.

“At the beginning of the day, you’re sitting with people you don’t know. You see people starting to meet up during the breaks, and by the end of the day they’re high-fiving and hugging each other. It’s not emotionally analogous to binge-watching. It’s way more fun, a day-long event, a festival.”

The Arsht Center has done several things to amp up the special, festive aspects of the experience. It commissioned a Hammer Trinity comic book from Oregon-based artist Brett Weldele, who utilized the words of the play’s prologue and his own hand-painted panels to create a free comic book with two different covers. The center’s BRAVA! restaurant has created a dinner menu of sandwiches, sushi, a roast turkey leg and other options that will be sold at concession stands during the hour-long dinner break. (The Café at Books & Books is another option for on-site dining, with a reservation.)

The 17 actors who perform the plays — Letts, the Pulitzer Prize-winning author of August: Osage County as well as an actor (recently in The Big Short and Homeland), recorded the part of exiled dragon Irek Obsidian.

“Not one of us had done anything like this before. Not many companies are even interested in doing something like this – it’s so innovative, it has so much passion for storytelling, for making the impossible possible,” says Stangler, who appeared at the Arsht in the House’s Death and Harry Houdini.

Playing Casper Kent in a script that runs some 450 pages – most plays are barely more than 100 pages – Stangler describes his part of what he calls “the hero’s tale,” a journey that takes Casper from age 17 into his mid 20s (the actor just turned 32).

“He goes from farm boy to king overnight … It’s like being thrown into the presidency of the United States, and the circus that that is,” Stangler says. “He’s trying to figure out what kind of king he is and how best to help the people. The story is about the law of the land, for example whether you’ll have a Bernie Sanders or a Donald Trump. Each choice has a consequence.”

Actor Patrick Falcon, the lone Miamian in the cast, graduated from New World School of the Arts in 2009. He took a master class when the House was in Miami with Death and Harry Houdini, then was cast as an understudy in a Chicago production of the show. Allen asked him to be in the second part of the trilogy when it debuted in Chicago.

“I had never been in anything so big, so rife,” says Falcon, who plays a shipwright, Casper’s father and other roles. “It is physically demanding, even when you aren’t onstage. You exit, run to the other side, change costumes and run back in. You have to stay in the ebb and flow, ride the energy of the production and the audience. You feed off the audience, which can be a little scary.”

Isabel Liss performed in The Life and Adventures of Nicholas Nickleby, the Royal Shakespeare Company’s marathon treatment of the Charles Dickens novel, when she was in college. In The Hammer Trinity, she’s Lady Olympia, who brings “a mother’s voice to the play…though she’s not that soft, nurturing kind of mother.”

She acknowledges that mastering a 450-page script is daunting. But she didn’t hesitate to jump on board: “When I first read the play, I was in. This is an awesome story.”

Joey Steakley, who appeared at the Arsht in the House productions of The Sparrow and The Nutcracker, has been part of the company since its founding in 2001. He’s enthusiastic about long-form theater – he calls All Our Tragic, a 12-hour mashup of Greek tragedies by Chicago’s The Hypocrites, “amazing” – and excited about returning to The Hammer Trinity, particularly as “villain” Henley Hawthorne.

“Henley is the bad guy in Part One, but I don’t play him as a bad guy. A lot of what he says the audience will relate to as right,” Steakley says. “I love playing bad guys who really aren’t – otherwise, it’s a Disney cartoon.”

Allen, the House’s charismatic leader, acknowledges that the Miami run may well be the final time The Hammer Trinity is performed; the economics don’t make sense for most regional theaters. So he, too, is thrilled to revisit what he and Matthews created.

When he was at a recording studio with Letts so that the actor could record his part in the trilogy, Allen remembers that the Pulitzer winner asked how he and Matthews got to doing what they do at the House.

“We figured out we’d built this space where anything could happen,” Allen says. “The fantastic became our home.”