Theater makers embrace outdoor shows in the pivot toward normalcy

Theater al fresco has always been part of South Florida’s artistic fabric, particularly during the months when weather tends to be pleasant. From roving Shakespeare in the Park productions by Miami’s Florida Shakespeare Theater to the inside/outside mix of shows like Juggerknot Theatre Co.’s “Wynwood Stories,” companies here sometimes do their in-season storytelling under the stars.

Now, as artists and audiences take their first steps out of pandemic isolation, outdoor entertainment as a bridge to normalcy is becoming an ever-more-attractive alternative to digital fare. Companies have been welcoming back theater fans with socially distanced shows, such as Miami New Drama’s splashy, much-extended “Seven Deadly Sins” along Miami Beach’s Lincoln Road and Area Stage’s “Shrek” in an open-air theater at South Miami’s Shops at Sunset Place.

Beginning Feb. 27 and going into mid-March, three notably different theatrical experiences – an improv comedy show, a staged reading series and an interactive crime caper – will open at Miami’s Adrienne Arsht Center for the Performing Arts. The latter will also be presented at the Broward Center for the Performing Arts in Fort Lauderdale (both arts centers have already hosted live music events).

First up is “Zoetic Schmoetic,” Zoetic Stage’s monthly excursion into the new-for-it world of improvisational comedy, which has an established Miami presence in companies such as Just The Funny and Villain Theater.

Stuart Meltzer, artistic director of the Arsht Center-based Zoetic Stage, is the first to acknowledge that improv “is really out of my wheelhouse.” So he turned to actor, educator and improv teacher Elena María García to be both a collaborator and “Zoetic Schmoetic” performer.

“I talked to Elena about what we could do that’s different and funny. We’d leave online to other companies and do this our own way,” says Meltzer, who is staging the show on the Arsht’s outdoor Thomson Plaza. “It was thrilling for me to get back to work. I’m doing the macro component, and the micro is Elena.”

Each show will last an hour and 20 minutes, he says, and it will be different each time.

The company comprises a blend of actors with improv experience and those newer to the form. Carbonell Award winners Clay Cartland and Jeni Hacker, New World School of the Arts grads Fergie L. Philippe (who was in “Hamilton” on Broadway when the pandemic hit) and Gabriell Salgado, plus Daryl Patrice and García have spent the past three weeks in rehearsals designed to help them coalesce as a troupe. 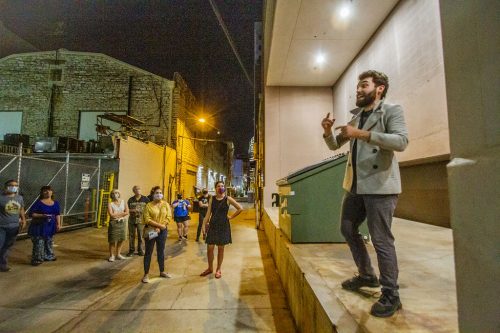 In addition to pandemic safety measures such as testing, temperature checks, masking and social distancing requirements, the actors know they’ll have additional challenges performing outside. Everything from weather to passersby to traffic noise can be a factor. The performance style has to be more physical, and facial expressions have to register through the actors’ clear masks.

But García, who has seen and done it all in improv (when she was with an all-woman troupe performing at a club, a booze-fueled audience member yelled, “Show us your boobs!”), knows how to keep a show on track.

“We’re doing short-form improv and theater games. If something is failing, I know how to save it,” she says. “There’s no time to be perfect. You have to listen, respond and be truthful.”

Philippe, who played Hercules Mulligan and James Madison on the “Hamilton” tour that stopped at the Broward Center two years ago, began performing those roles on Broadway on Jan. 21, 2020. The coronavirus pandemic closed the show on March 11, 2020, and after spending time doing virtual events and teaching, the actor returned to Miami in November to be with family.

“I didn’t think improv was my jam, but anything Elena asks, I’d do,” says Philippe, who studied with García and Meltzer at New World. “Something felt right. This has turned out to be the best decision I’ve made in quarantine.”

Though at first he suffered from “impostor syndrome” every time he went to a rehearsal, the actor says he’s found a sweet spot among his funny cohorts: “Now we’re comfortable enough to mess with each other when Elena throws us curveballs.”

Cartland, who was with Just The Funny for three years, will perform a storytelling monologue as part of “Zoetic Schmoetic.” As polished as the result can sound – Meltzer and the other actors marvel at his skill – Cartland says a tale can flow from a noun like “green beans,” which led him to magic beans, “Jack and the Beanstalk,” the giant losing his fortune and his wife leaving him.

“Your mind has to fire really quickly to connect the dots. You have to find lots of layers in things,” he says.

Meltzer is hoping that “Zoetic Schmoetic” can become a long-term element of his company’s programming.

“My goal is that it could run nine months of the year, and I’d like to build it to a [performing] cohort of 15,” he says. “This is giving improv a different platform by doing it at the Arsht Center.”

As with Zoetic, Miami’s City Theatre is moving from its usual venue inside the Arsht’s Carnival Studio Theater to the outdoor Thomson Plaza for “Shorts Outside the Box.” Artistic director Margaret M. Ledford plans to present different short plays in each of the company’s three monthly programs beginning March 11, enhancing the experience with live music and sound.

“We’re doing our rehearsals via Zoom. This is a test for us, but when we put out a call asking who’s ready to do this, 25 people said they were willing,” says Ledford, who will cast according to the plays she picks for each reading. “Audience groups will sit at separate cabaret tables, and they’ll be able to text drink and food orders to the bar there.”

Actor Daniel Llaca, who was to have been in City Theatre’s 25th anniversary Summer Shorts festival in 2020 before the pandemic forced its cancellation, calls the reading series “a grand experiment, with the theater and the community coming back together.”

For Llaca, it’s a great use of the Arsht space: “It’s nice to see them getting so creative, and I’d love to see it continue.”

Sandi Stock, who performed Aurin Squire’s solo piece, “Blackfish,” behind the glass of a repurposed storefront as part of Miami New Drama’s “Seven Deadly Sins,” experienced the strangeness of Lincoln Road pedestrians pausing to watch her, though only ticketholders could hear the dialogue via earbuds.

“Shorts Outside the Box,” she says, will be different.

“I think this is a really good way to get people more interested in theater. With the Arsht’s outdoor programs, people walking by will stop and think, ‘Huh? What’s going on?’” she says. “I’m excited to be on a stage with real live people again.”

The areas around the Arsht Center and Broward Center will become far more active once “Art Heist Experience” opens.

Running from March 16 to April 4 outside the Arsht, with a separate cast performing March 16 to 26 in Fort Lauderdale, “Art Heist” is an interactive true-crime show inspired by the theft of 13 works of art worth $500 million from Boston’s Isabella Stewart Gardner Museum in 1990. Created by Justin Sudds of Right Angle Entertainment, and co-written and co-directed by TJ Dawe and Ming Hudson, the play asks masked audience groups to walk around interviewing “suspects,” then come to a whodunit conclusion.

Dawe, a director, playwright and educator based in Vancouver, has assembled two South Florida-based casts through video auditions and will rehearse the actors over Zoom. Once the show opens, a production coordinator at each performing arts center will keep everything running smoothly and take notes on which actor gets the most “guilty” votes during performances.

“Each actor gets a long file about the character and the points of evidence against him or her,” Dawe says. “In rehearsals, we fire question after question at them. Sometimes, audience members spot flaws, and we adjust.”

Dawe, who is developing another interactive show based on the board game Clue, says feedback from “Art Heist” in different cities has been “hugely positive.” The show has already had five productions, with more scheduled after the two in South Florida.

“This shows how much we thrive on interaction, how thirsty we are for it,” Dawe says. “‘Art Heist’ gets you walking, breathing fresh air and feeling a sense of shared energy that has been taken away from us.”