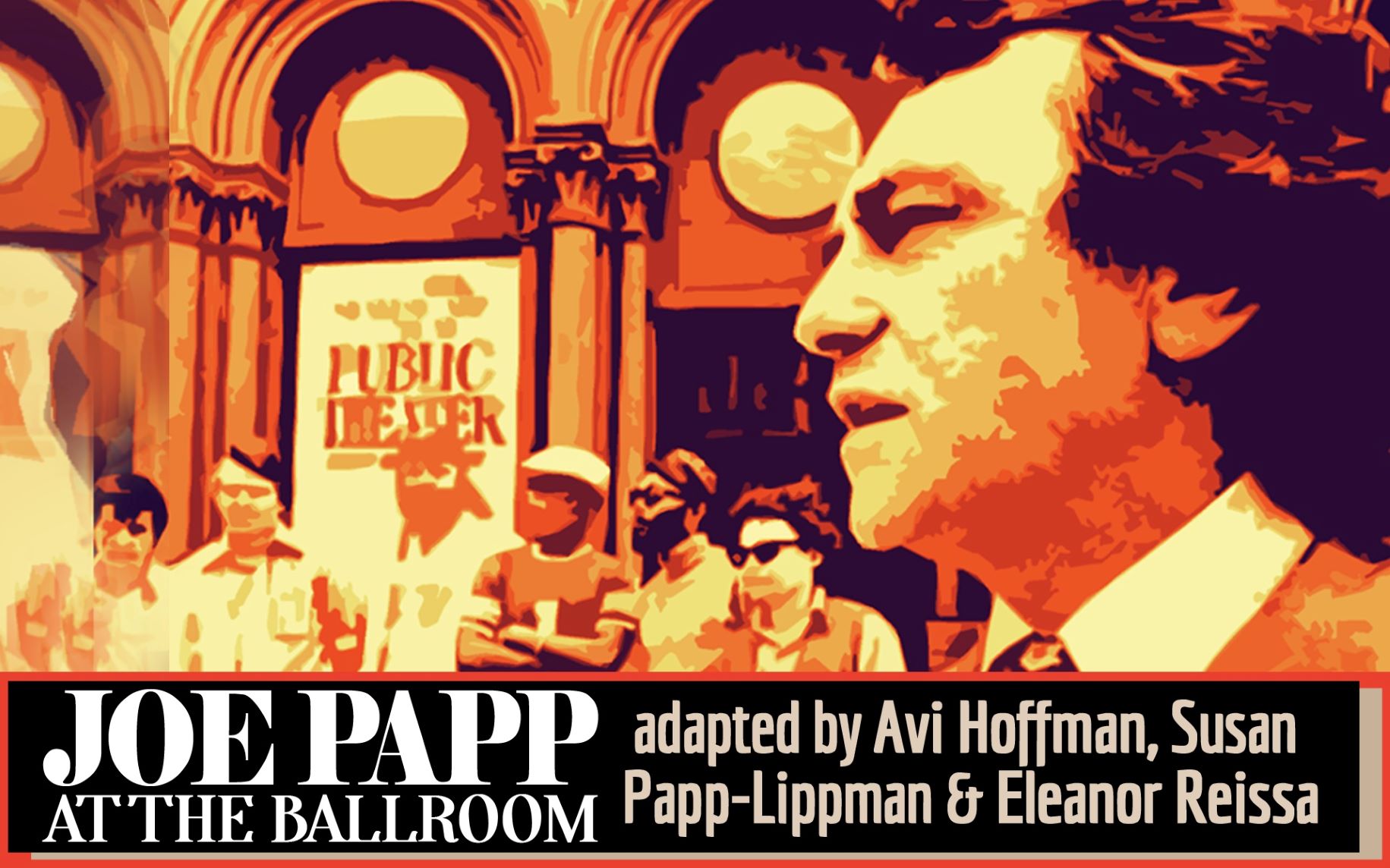 The GableStage world premiere of “Joe Papp at the Ballroom” aims to remind audiences of the influential impresario’s legacy. (Graphic courtesy of GableStage)

Just looking at actor-singer Avi Hoffman — creator and star of the popular “Too Jewish” shows, as well as a Carbonell Award winner for playing the adoring hubby in “Hairspray” at Actors’ Playhouse — you wouldn’t necessarily think of casting him as visionary New York Shakespeare Festival founder Joseph Papp.

After all (yes, this is superficial), Hoffman has sandy hair, bright blue eyes and a ready smile. He was born almost four decades after Papp, who died in 1991 at age 70, so they grew up in different eras.

Papp, born Joseph Papirofsky in Brooklyn, had dark brown hair and piercing brown eyes. You can find pictures of him smiling, sure. But mostly he sported the intense look of a man determined to shake up the theater world.

Still, if you come to GableStage’s “Joe Papp at the Ballroom,” a world premiere play-with-music, it’s Hoffman you’ll find onstage as Papp.

The show, which previews at 8 p.m. Dec. 17 and opens at 8 p.m. Dec. 18 for a run through Dec. 31, is a collaborative effort by Hoffman, Tony Award-nominated director and playwright Eleanor Reissa, and Susan Papp-Lippman, one of Papp’s five children.

“Joe Papp at the Ballroom” aims to enlighten as it entertains. Hoffman, who won rave reviews for playing Willy Loman in a 2015 Yiddish-language production of “Death of a Salesman” by New York’s New Yiddish Rep, considers Papp “the most important producer of the 20th-century.” In celebrating his legacy through the show, the actor wants to remind audiences of the groundbreaking ways in which Papp shaped theater in New York and beyond.

In brief: Papp created the New York Shakespeare Festival to share free performances of William Shakespeare’s work with one and all, a practice that continues at the open-air Delacorte Theater in Central Park. He established the multistage Public Theater in the former Astor Library, developing and showcasing both plays and musicals, with several winning a Pulitzer Prize. He cast Black and Latino artists in leading roles decades before the conversation about opportunities in theater intensified. He championed the work of multiple playwrights, and in transferring Public-developed hits like “Hair” and “A Chorus Line” to Broadway, he found a way to ensure the survival of his vitally important and influential nonprofit theater operation.

“I love that this project, a true American theatrical love letter and history lesson, is a world premiere that we developed and [are] originating at GableStage,” says Bari Newport, the company’s artistic director. “I really love the script! It is a theatrical, inspirational and triumphant everyman story: one ordinary man who accomplishes the extraordinary.”

Produced in conjunction with YI Love Jewish (a division of the nonprofit Yiddishkayt Initiative founded by Hoffman), the project took off after Hoffman became aware that Papp had done a week of concert appearances at The Ballroom in New York’s SoHo neighborhood in 1978. Papp-Lippman had audiotapes which she shared with the actor, who was impressed with the quality of Papp’s singing.

“He was a great singer. You’d be shocked at how good he was,” says Hoffman. “It wasn’t for lack of talent that he didn’t pursue a singing career. It was lack of desire.” 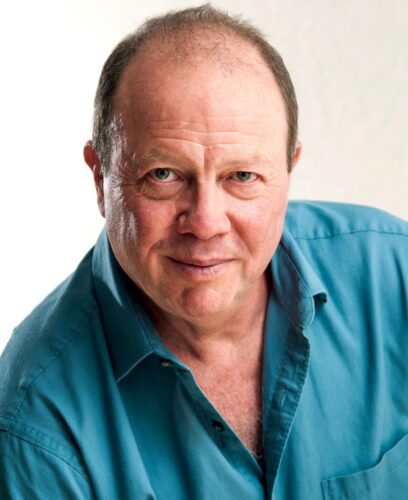 Avi Hoffman is a co-author and star of the GableStage world premiere, “Joe Papp at the Ballroom.” (Photo courtesy of George Schiavone)

Hoffman met Papp through his mother, now-retired Columbia University professor Miriam Hoffman, who’d interviewed the impresario in the early 1980s. Papp spent the years before he started school speaking only Yiddish, and Miriam Hoffman reportedly reminded him of his mother. In 1989, when Miriam Hoffman wrote the book for the Yiddish-language musical, “Songs of Paradise,” Papp presented it at the Public Theater in a production directed by Avi Hoffman and musically staged by Reissa, both of whom appeared in the show.

Papp-Lippman, who spends part of the year in Delray Beach, entered the picture after she attended a Florida Atlantic University lecture Miriam Hoffman delivered in 2016 about her relationship with Joe Papp. The women became friends, and after Papp-Lippman met Avi Hoffman – whose work, she confessed, she hadn’t known – she thought, “OK. This is a performer.”

Hoffman went on to do several performances of a nearly word-for-word concert version of Papp’s Ballroom appearance, but he wanted to develop the show further.

“Avi is so passionate about keeping my father’s legacy alive,” Papp-Lippman says. “He wanted to do a show, to add something, so he brought in Eleanor, who had a spin on it. As a reference librarian, I love the steps along the way … We wanted to get at the heart of this man, to hear the back story of what made this genius tick.”

Papp-Lippman sees her father’s life as “a Jewish Horatio Alger story.” Although he left when she was a baby and didn’t come back into her life until she was 16, she says, “I called him perfectly imperfect. He was a flawed man, but flawless in his beliefs.”

Director Reissa, who appeared on Broadway in “Indecent” (Hoffman was in GableStage’s production) and who is the former artistic director of the National Yiddish Theatre Folksbiene in New York, has also been recording the audiobook for her upcoming memoir when she’s not in rehearsal for“Joe Papp at the Ballroom.” (“The Letters Project: A Daughter’s Journey” is expected to be published on Jan. 18, 2022.) 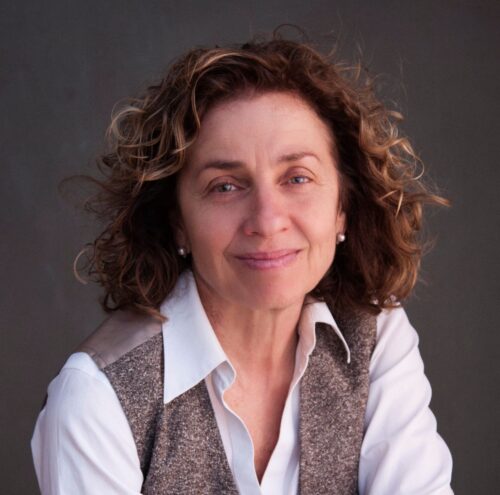 Director Eleanor Reissa helped write and shape the script of “Joe Papp at the Ballroom.” (Photo courtesy of Adrian Buckmaster)

“Avi and I met decades ago. We did three pieces together. He said his mother had written this thing based on ‘Songs of Paradise,’ and he told me, ‘Ya know, Joe Papp is coming.’ Lo and behold, Joe Papp shows up. And we moved to the Public,” she says. “He was an awesome guy. He really evoked awe because of his accomplishments. I knew him as a boss and an inspiration. What would we have done without Joe Papp?”

Reissa, who came up with a way to tell more of the impresario’s story in “Joe Papp at the Ballroom,” is as committed as Hoffman to conveying their subject’s legacy.

“Fame is fleeting, and history seems to be something people are not paying attention to that much,” she says. “This was a man who was brave and bold and forward-seeing … People may not remember him, but when he performed at the Ballroom in 1978, everybody knew who he was. In [this show], we get to see his journey and experience him evaluating his life and time.”

In “Joe Papp at the Ballroom,” Hoffman will perform alongside pianist Phil Hinton, his longtime musical collaborator, singing songs by Richard Rodgers and Lorenz Hart, Irving Berlin and others, as well as fragments from “Hair” and “A Chorus Line,” and Yiddish tunes that reflect a key part of who Papp was.

Of the man he’ll be portraying, Hoffman says, “He was a magnificent force and a fallible human.”

And like Papp, Hoffman is a dreamer and a doer.

“Any strong singing actor could do this,” he says. “I think about Kevin Kline, Martin Sheen, Nathan Lane, Mandy Patinkin [all actors who worked with Papp]. Let them take their stab at it on Broadway.  I want it to run forever.”

WHAT: “Joe Papp at the Ballroom,” adapted by Avi Hoffman, Susan Papp-Lippman and Eleanor Reissa

STREAMING: A streaming option is available Dec. 22-31; cost is the same as the price of a regular ticket. Check with the box office for details.