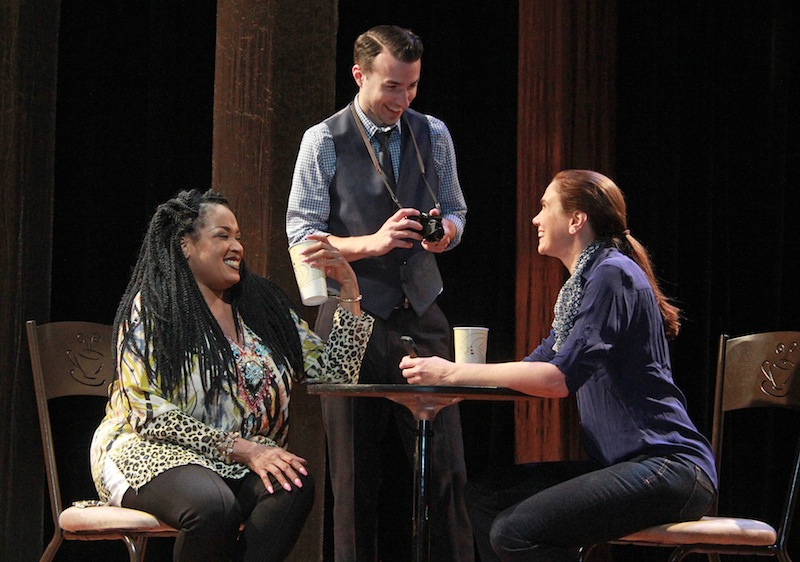 David Arisco really loves the work of playwright Sean Grennan. The artistic director at Actors’ Playhouse in Coral Gables has previously staged three of Grennan’s plays and has just opened his production of a fourth, The Tin Woman.

Arisco describes the piece as a “dramedy,” an amalgam of drama and comedy that explores a serious story while infusing the plot with warmth and tension-relieving laughs. That’s accurate, but while the stylistically intriguing play has plenty of moving moments, neither Grennan’s script nor Arisco’s interpretation of it builds the tonally disparate elements of The Tin Woman into a memorable whole.

The title refers to the play’s central character, Joy (Jennifer Christa Palmer), a graphic designer whose life has been saved by a heart transplant. That salvation, of course, comes at a tragic cost: A car accident claimed the life of Joy’s donor, a talented New York photographer named Jack (Cliff Burgess).

Life post-transplant is no happily-ever-after for Joy. Initially, she has to down 50 pills a day to prevent rejection of her new heart. She can’t drink. She dumps her boyfriend. She spirals into depression, and even time with her cheery best pal Darla (Lela Elam) doesn’t help.

But after she writes a letter expressing her gratitude and condolences to her still-anonymous donor’s family, Joy gets a surprise. Jack’s mother Alice (Laura Turnbull), using the contact information supplied by the organ donation group, calls to invite her to dinner, where she’ll meet Alice, Jack’s father Hank (Ken Clement) and their daughter Sammy (Natalia Coego), a preschool teacher and blogger.

In The Tin Woman, Grennan explores grief, unfinished emotional business, survivor’s guilt and more. In one particularly inspired choice, he has the actor playing Jack be a silent presence in most of the scenes, the observant physical embodiment of a life that was cut short yet passed along. Burgess speaks only briefly, mostly in flashback, but he makes the memory of Jack – and Jack’s legacy – integral to the action.

Palmer’s serious Joy and Elam’s ebullient Darla make for an odd couple of best friends, but the contrast makes their scenes together buoyant (Elam also plays the Jamaican nurse who tends to Joy just after her transplant surgery).

Giving a performance that manages to be both fierce and full of empathy, Carbonell Award winner Turnbull makes Alice the emotional bedrock of The Tin Woman, a healing force whose compassionate love will now extend to the guarded woman who carries within her Jack’s beating heart.

Clement and Coego, both fine Carbonell-winning actors, have tough challenges in The Tin Woman.

Clement’s Hank is, for most of the play, a ball of fury, a man who expresses his complicated grief by yelling at his family and numbing his guilt with booze. Near the play’s end, the reason for that guilt is revealed, but the quick turnaround in Hank’s attitude toward Joy isn’t credible.

Sammy is supposed to be sweet, emotional and a little goofy, and Coego certainly delivers all of those qualities. But at the top of the second act, Arisco slingshots the performer into sitcom territory, having Coego exaggerate Sammy’s temporary hearing problem and go all over-the-top weepy. It’s too much.

Jodi Dellaventura’s set gives Jack’s family a home that looks more like an old-fashioned Midwestern abode than a present-day house in the New York ‘burbs, but that in itself makes a statement about the differences between combative regular-guy Hank and his creative son. Eric Nelson’s lighting, Ellis Tillman’s costumes and Shaun Mitchell’s sound design, which borrows a snippet of Falling Slowly from Once as a subtle nod to impossible love, serve the play well.

The Tin Woman is a thought-provoking, touching and good (though not by any means great) play. The Actors’ Playhouse cast delivers the script’s serious themes and tender moments, but Arisco pushes the comedy in the “dramedy” too hard.