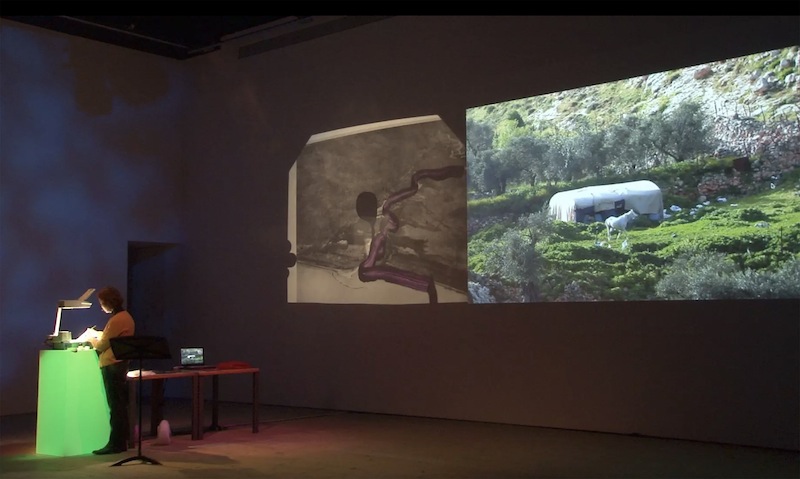 Consider the idea of land in Palestine, and conflict may be the first thing to come to mind. But for Jumana Emil Abboud, the Palestinian landscape evokes other, older, associations – with mythological creatures like water spirits and ghouls.

“These stories were told way before 1948,” says the Galilee-born artist, speaking by phone from her home in Jerusalem. She suggests looking back centuries before the declaration of the Israeli state and the current tensions in the region, observing, “Our connection to the landscape and the water sources was very deep and beautiful.”

Emil Abboud grew accustomed to picturing her homeland in her imagination, after her family moved to Canada when she was eight years old. “We tried to maintain a Palestinian culture in our home,” she recalls. That included telling folk tales from and about the villages the family left behind.

When she returned to Israel to study art in her early twenties, she began looking for the places she had heard about in those tales. Unlike Hansel and Gretel’s forest or the bridge crossed by the three billy goats gruff in Western folktales, the tales Emil Abboud had grown up hearing could be plotted on a map, near a “specific tree, spring, or well.”

“For my aunts and my grandmothers, these were not just words,” she continues. “People believed a specific water source connected to a story could cure — or it was haunted, so we were told don’t go there or we would find a ghoul.”

Adding to the tales she heard from family members, Emil Abboud pored over books like Speak Bird, Speak Again: Palestinian Arab Folktales, collected by Ibrahim Muhawi and Sharif Kanaana, and a 1922 book by Dr. Tawfiq Canaan, a Palestinian medical doctor turned ethnographer, who happened upon the tales. Emil Abboud recounts, “Many of his patients would pay him by giving him talismans and ritual stories.”

The artist and her collaborator, photographer and videographer Issa Freij, set out to find the “haunted sites” mentioned in these tales in “ancient water sources” and “old caves.” They found roughly 20 sites they believe to be connected to specific folktales. These sites are revealed in Maskouneh (Inhabited), a non-narrative, three channel video, that lingers on landscapes nearly devoid of human presence. Bird song echoes through forests, a horse wanders a rocky field, a distant city is partly blotted out by a series of hills. Pink flowering trees bloom. A goat bleats. Rain falls, streams burble, water drips in caves. Here and there, a human figure sits small in the distance.

Conspicuously absent are the military checkpoints and the wall that separates Palestinian territory from Israel. Emil Abboud confirms that she omitted those barriers on purpose. As she explains, “I wanted to give the sense that this landscape embraces you openly, unconditionally, and freely.”

Emil Abboud and Freij will welcome Miami audiences into that landscape when they screen Maskouneh as part of the Living Together performance series hosted by the Museum of Art and Design at Miami Dade College. The video will be one part of “Out of the Shadows,” a performance that has been evolving for more than seven years.

In the first part of the performance, Emil Abboud the storyteller will recount Palestinian folktales as her elders once did. A video of her telling stories in an earlier version of “Out of the Shadows” last October, at the Darat al Funan gallery in Amman, Jordan, shows her speaking in an understated style, her eyes filled with quiet wonder.

In the second part, she promises to weave the Palestinian tales with those more familiar to her audience. During this interview, she reported that she was taking a break from “doing her homework” on South Florida folktales. During the performance, she will solicit tales directly from the audience.

For the third part of the performance, against the backdrop of Maskouneh, she and Freiji will tell contemporary stories of how they found the sites featured in the video. Again, Emil Abboud insists, they will shy away from any overtly political encounters and instead comment on their experience of the natural and the supernatural.

The supernatural also appears in Emil Abboud’s drawings of the water spirits and monsters who haunt the folktales. Despite their fearful content, these drawings are delicate and whimsical: a pale green bird with a woman’s face stands with wings raised; a fish with a pastel patchwork of skin reveals sharp teeth.

“For me, a monster is an idea, not a physical being,” Emil Abboud’s says. “I tried to make the drawings all look the same, so the ghoul looks like the beautiful bride. You can’t tell which is the monster and which isn’t the monster.”