“The Humans” All About Humanity 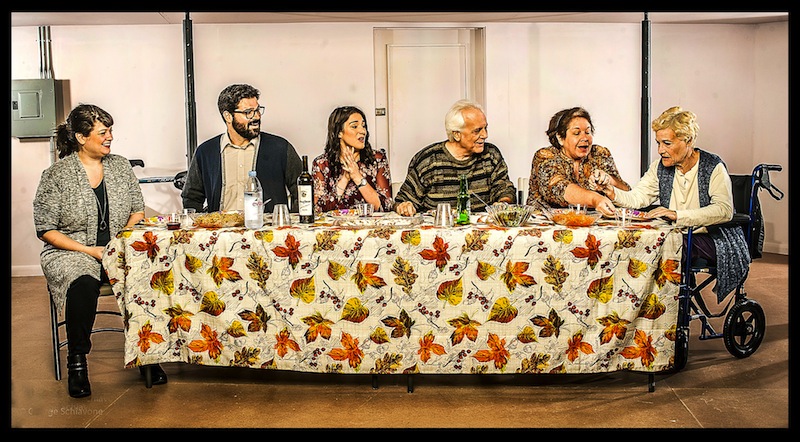 We humans do love our rituals. When an extended family gathers for the holidays, familiar traditions promise a comforting respite from an increasingly complex, chaotic world.

Still, realistically, troubles and fears refuse to be left behind. They surface like unwelcome guests. So do resentments and stinging remarks born of deep knowledge. With Thanksgiving on the horizon, you wonder: Beyond the turkey dinner, what else is going to be on the menu?

Playwright Stephen Karam explores the intricate relationships within a family and the toll of modern life in “The Humans,” a play that is often funny yet resonantly unsettling. A finalist for the Pulitzer Prize for drama and winner of the 2016 best play Tony Award, the play will embark on a national tour next month. But South Florida already has a homegrown production at GableStage, where director Joseph Adler and a superb cast are exploring the love and pain that coexist within a family – and within each of us.

Adler earlier presented Karam’s “Speech and Debate” and “Sons of the Prophet” (also a Pulitzer finalist) at GableStage. In his intricately honed production of “The Humans,” the director has guided his six actors to performances that clearly convey the emotions surging beneath the dialogue. The portrayals are richly specific yet, in their depiction of the fears that too often plague us, unnervingly universal.

“The Humans” plays out in a noticeably odd Chinatown apartment in Manhattan (the stark, nearly empty apartment with its bad feng shui is by Lyle Baskin). Cobbled together from a small ground-floor apartment and the basement apartment below it, the upper level (where the bathroom is) and lower one (which has the kitchen) are connected by a spiral staircase.

That’s fine for the apartment’s brand-new occupants, aspiring composer Brigid Blake (Diana Garle) and her social work student boyfriend Richard Saad (Alex Alvarez), who have just moved in together. But just how, you wonder, will they get Brigid’s paternal grandmother Fiona “Momo” Blake (Carol Caselle) and her wheelchair down to dinner and up to the bathroom?

Momo, who suffers from dementia and has the exceedingly pale look of one not long for this world, has been brought in from the family’s home in Scranton, Pennsylvania, by her son Erik (Michael Gioia) and daughter-in-law Deidre (Elizabeth Dimon). Erik has spent most of his working life as the maintenance guy and equipment manager at a private school. His devoutly Catholic wife has been an office manager for more than 40 years.Yet their “golden” years are proving to be anything but rewarding, and both seem jittery.

Brigid’s older sister Aimee (Meredith Bartmon) has come in from Philadelphia, where her bosses have informed her that her days as an attorney with their firm are numbered. Her ulcerative colitis is getting much worse, and her longtime love has a new girlfriend and zero interest in getting back together, as she makes plain in a painful holiday phone call. On this Thanksgiving, gratitude for blessings is not – understandably – uppermost in her mind.

Because the truck carrying Brigid and Richard’s furniture hasn’t made it to Chinatown yet, this holiday dinner is hardly a fancy feast. Served on a long, presumably rented table covered with a fall leaf-bedecked plastic cloth, with the food on paper plates, the Blake family’s dinner is modest indeed. But the truths that surface, the way the actors remain captivating even in the smallest moments of Karam’s 90-minute play? That’s a dramatic banquet.

Dimon, Caselle and Alvarez are all Carbonell Award-winning actors. In “The Humans,” they and Gioia, Bartmon and Garle are all doing award-caliber work.

Gioia is powerful and mysterious as a man haunted by his mistakes and fears. Dimon is warm, steadfast and troubled as a woman who turns to food for comfort as life refuses to play out the way she hoped it would. Caselle is utterly convincing as Momo, whose brain has betrayed her. Alvarez radiates comfort as a guy who soon won’t have to worry about money. Garle conveys the struggle of a young artist trying to make ends meet in low-paying jobs, as well as the resentment she feels over having had to take out crippling student loans. As Aimee, Bartmon shares Deidre’s warmth, and she turns that awkward phone conversation with Aimee’s ex into one of the most agonizing yet moving moments in the play.

The work by GableStage’s design team – Baskin, lighting designer Jeff Quinn, costume designer Ellis Tillman and sound/music designer Matt Corey, who supplies the unnerving sounds that make the odd apartment seem more than a little haunted – is uniformly excellent. So are the staging and performances in “The Humans,” easily a highlight of South Florida’s fall theater season.