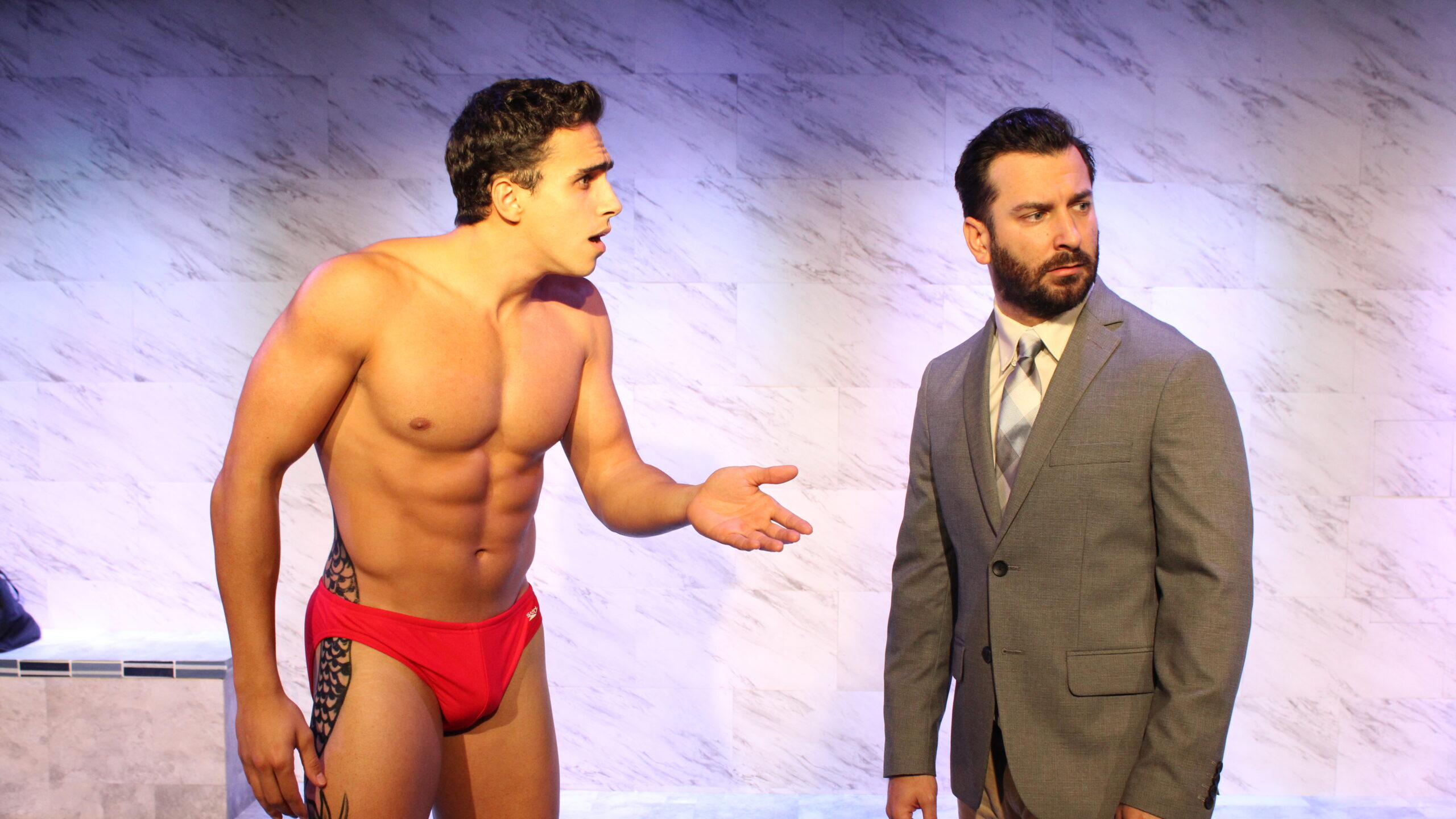 Gabriell Salgado as an Olympic hopeful and Christopher Anthony Ferrer as his brother in “Red Speedo” at The Foundry. (Photo courtesy of Dennis Dean)

When you go to a Ronnie Larsen-produced play at The Foundry in Wilton Manors, you never know quite what you’re going to get.

Or it could be a very different sort of play, like Larsen’s autobiographically-inspired “The Actors” or the play that’s onstage through the end of December – Lucas Hnath’s “Red Speedo.”

Collaborating for the third time with guest director Stuart Meltzer, the artistic director of Miami’s Zoetic Stage, Larsen is presenting an Obie Award-winning play about the moral compromises of an Olympic-class swimmer and those who would profit from his success. 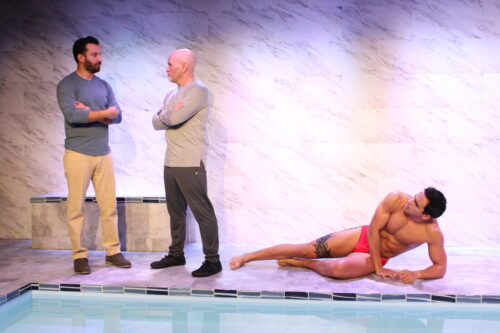 Christopher Anthony Ferrer and Jerry Seeger face off while Gabriell Salgado listens in “Red Speedo” at The Foundry in Wilton Manors. (Photo courtesy of Dennis Dean)

Hnath, an Orlando native whose 2017 Broadway play “A Doll’s House, Part 2” will be produced by GableStage in February-March, is known for his eclectic range in subject and style, and 2013’s “Red Speedo” is in part his nod to the work of David Mamet.

Miami-based actors Gabriell Salgado and Chris Anthony Ferrer (both graduates of  Miami’s New World School of the Arts) are joined by Casey Sacco and Jerry Seeger in this taut exploration of malleable values, shifting allegiances  and flat-out lies.  Hnath’s plotting is intricately twisting, full of surprises, so we’ll be stingy in sharing certain details.

But we will tell you this: When you enter the 53-seat theater space at The Foundry, the first thing you’ll notice is the sleek pool that set designer Melquisedel Dominguez built on the elevated stage. Because if you’re producing “Red Speedo,” a play about a swimmer on the cusp of career-transforming success, of course you need a real pool, no matter how small your theater may be.

Salgado, a Silver Palm Award recipient who appeared in the world premiere of Michael McKeever’s “The Code” at The Foundry, stars as a rising swimming talent named Ray. Playing a closeted 1950s would-be movie star in “The Code,” the chiseled Salgado wore a suit; here, his entire costume consists of a tiny red bathing suit, a swim cap and goggles, plus a massive sea serpent tattoo (designed by Avi Ram) encircling his body.  “Red Speedo” isn’t a gay-themed play, but it’s clear that the poster featuring a swimming Salgado and his extremely low body fat percentage has helped drive the show’s brisk ticket sales. 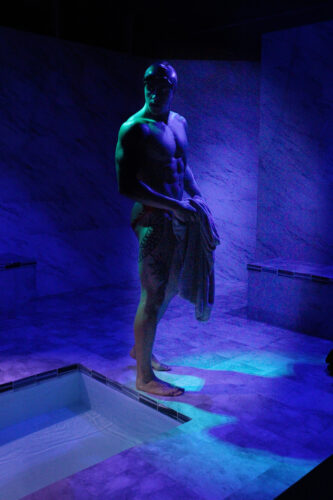 Gabriell Salgado plays a top-tier swimmer at a crossroads in “Red Speedo” at The Foundry.
(Photo courtesy of Dennis Dean)

With a growing body of professional work, the young actor stunned in his Carbonell Award-nominated professional debut as the Creature in Zoetic’s “Frankenstein,” and he’ll soon appear in the 20th-anniversary revival of Nilo Cruz’s “Anna in the Tropics” at Miami New Drama and Charise Castro Smith’s “El Huracán” at GableStage.

His challenge in “Red Speedo” is playing a childlike, manipulative, obsessive athlete who’s maybe a quarter as smart as Salgado himself.  With the help of Meltzer, who has a genius for finding funny undercurrents in the smallest moments and gestures, Salgado nails pretty-boy Ray’s hubris and deficiencies.

For example:  As Ray’s lawyer brother Peter, Ferrer lays into Seeger as Ray’s longtime swim coach. Seeger silently radiates intense disapproval as Peter argues that Coach should not report the discovery of performance-enhancing drugs in the facility’s refrigerator.  Not on the eve of the Olympic qualifying trials, not as Ray may ink a life-changing spokesmodel deal with Speedo.

As the men escalate into a full-blown verbal conflict delivered in Mamet-like sentence fragments, Salgado’s seated Ray follows the back-and-forth with his large brown eyes, as if he were a spectator at Wimbledon. His rationale for the giant tattoo (he’d stand out more easily on TV) and his ideas for future nicknames (Ray Gun? Raydar?) show his intensifying focus on the glittering aftermath of Olympic success.

Ray is not, however, the only flawed character in “Red Speedo.” All four have issues.

Peter, played with an always-there undercurrent of desperation by the skillful Ferrer, sees his problematic brother’s success as his ticket out of a law firm job he hates, a fast pass into the lucrative world of sports agentry.

Seeger’s commanding Coach at first appears to be an honorable man, one who knows every mental and physical facet of his star swimmer.  But as it starts to look like Ray may jump ship, honor becomes situational.

The warmly appealing Sacco plays Ray’s sad and bitter ex Lydia, a sports-focused therapist he was ready to marry (and he still has a cockamamie matrimonial plan in mind). He has asked her to the training facility because he desperately needs something from her, and in the course of their conversation, we learn how much she’s lost because of Ray and Peter and her own actions. 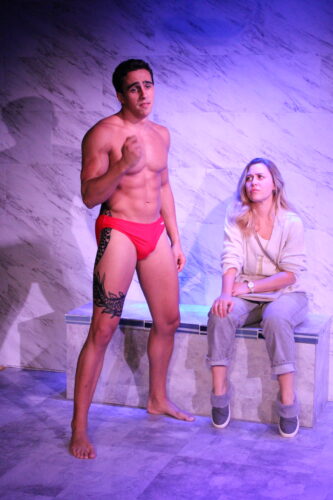 Gabriell Salgado as a world-class swimmer makes his case to Casey Sacco as his therapist ex in “Red Speedo” at The Foundry.(Photo courtesy of Dennis Dean)

As amusing as “Red Speedo” can be, Hnath’s play is ultimately unsettling, deeply so when the brothers finally come to blows. At first, Paul Homza’s fight choreography has Ray and Peter trading gut punches. But then the pool, silently waiting the whole time, gets weaponized. And you, like one of the actors, agonizingly hold your breath.

Adding to Dominguez’s tile-dominated set, Preston Bircher’s lighting reinforces the quiet shimmer of water, the stark glare of confrontation, the bloody potential of cheating. Panos Mitos mixes the startling blast of competition sounds with the music – some calming, some energizing – Ray hears through his earbuds.

“Red Speedo” is a play that might have shown up on any number of South Florida stages.  But Larsen is the producer who said yes, had the pool built and collaborated with Meltzer on a powerful production.  His is the little theater that could – and does.

WHAT: “Red Speedo” by Lucas Hnath