“The Elaborate Entrance of Chad Deity,” Wrestling an Extreme Satirical Take Down 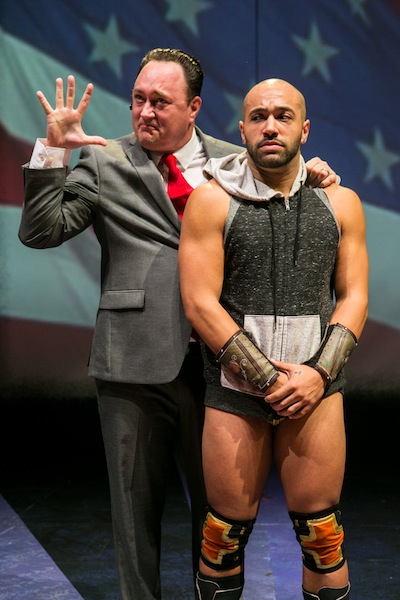 Kristoffer Diaz’s searing, hilarious and all-too-resonant play “The Elaborate Entrance of Chad Deity” isn’t new to South Florida. The 2009 script, a finalist for the Pulitzer Prize for Drama, made its area debut in 2012 in a fierce and fine production at Boca Raton’s Caldwell Theatre Company just a few months before the long-running regional powerhouse folded.

Now “Chad Deity” has returned to wrestle again, this time as an excellent, bombastic show at Miami Beach’s Colony Theatre. A coproduction of Miami New Drama and Sarasota’s Asolo Repertory Theatre, where it debuted last April, this new “Chad Deity” has one key underlying element that the Caldwell’s version of course did not: Donald Trump in the Oval Office.

That reality, and the country’s sociopolitical upheaval during the president’s first year in office, has given Diaz’s flashy yet moving script an even more powerful satirical bite. In other words, the crushing of American Dreams and the extreme stereotyping of those who don’t happen to be Caucasian feels ripped from today’s headlines. Or Tweets.

Director Jen Wineman, nearly all of the key cast members and the design team are New York-based, and their work on the Asolo production of “Chad Deity” won them multiple awards (including best production of a play) from Sarasota Herald-Tribune arts editor and theater critic Jay Handelman.

The major cast change for Miami New Drama’s mounting of the show is having Carbonell Award-winning actor Todd Allen Durkin in the role of insatiably avaricious wrestling titan Everett K. Olson. Durkin, a veteran stage actor with a growing list of television credits and an ongoing radio gig at 102.7 The Beach, fits snugly with the rest of the cast, just as snugly as that part of the wrestling costume one of the guys dubs “spandex panties.”

“The Elaborate Entrance of Chad Deity” is set in the world of professional wrestling, yet another tie to our WWE-loving commander-in-chief.

The play’s narrator and designated fall guy is Macedonio “Mace” Guerra (Pierre Jean Gonzalez), a Bronx-raised pro of Puerto Rican descent. Mace explains that he grew up watching wrestling on TV with his two older brothers as they chowed down on a generic (and pretty bad) version of Frosted Flakes. He came to revere the scripted “sport,” aspired to be a part of it and now works for Olson, called EKO by the men who work for him at the play’s fictional THE Wrestling.

Mace’s primary job is to lose matches to the current champ, swaggering Chad Deity (Garrett Turner).Chad is a sharp-dressing, trash-talking African-American made wealthy by EKO’s understanding of the bloodlust wrestling fans have for watching an all-American “good” guy demolish a “bad” guy full of anti-American animus.Trouble is, Chad isn’t much of a wrestler, so Mace’s job is to make him look good with moves like the powerbomb, in which he does all the work as Chad slams him to the mat.

When Mace meets Vigneshwar Paduar (Raji Ahsan), a charismatic Indian-American Brooklynite who flows among cultures like no one he’s ever seen, the professional fall guy sees his chance to ascend and make some serious money.

He takes his new pal to EKO, who horrifies both men with his latest brainstorm:Mace will now wrestle as an America-hating Mexican called Che Chavez Castro, while Vigneshwar (called VP by the many who don’t even try to pronounce his name) will be transformed into USA-loathing Muslim dubbed The Fundamentalist.

And “Chad Deity” then gets even crazier.

And know this: Actual, violent-appearing wrestling moves get made in a ring that slides out to be surrounded on three sides by an audience that sometimes feels the need to duck. Chad makes it rain money, and the bills have his picture on them (natch). And it’s just a matter of time before a deluge of shiny red, white and blue confetti creates a nightmare for the Colony’s cleaning crew.

The cast is sublime. Because Gonzalez’s Mace is so sympathetic as he opens up about his past, his dreams and the jingoistic world EKO is peddling, we watch the action through his eyes. Ahsan infuses his VP with charisma on steroids, and his dance with Mace soon after the characters team up will make you wish these two had their own show.

Turner makes Chad almost cartoonish in his narcissism, a demanding and deeply self-satisfied guy whose favorite person is the one smiling back at him from a mirror. Durkin lets the audience see EKO’s box office-focused mental wheels turning, and you know that his red baseball cap sporting the words “Make America Chad Again” is an exploitative nod to EKO’s imagined BFF and role model, the rah-rah USA prez.

Pro wrestler Jamin Olivencia plays a variety of body-slamming stereotypes as three different opponents. Gabriel Bonilla is the cameraman who zeroes in on the action, while Monica Lynne is a noisily enthusiastic audience plant.

In addition to EKO’s red cap, a few other markers from the United States in 2018 have been slipped into the production. Mace brings up the continuing lack of power for too many Puerto Ricans. There’s a reference to Oprah at the Golden Globes, and briefly an image of a sign reading “U.S. Border Wall Ahead” flashes onto a screen on the set.

Diaz, a story editor for the Netflix women’s wrestling series “Glow,” created a play that is flamboyantly theatrical, witty and illuminating in “The Elaborate Entrance of Chad Deity.” If you missed it earlier (or even if you didn’t), Miami New Drama is providing a highly entertaining way to ponder how we do – or don’t – respect and care for one another in our contentious country.