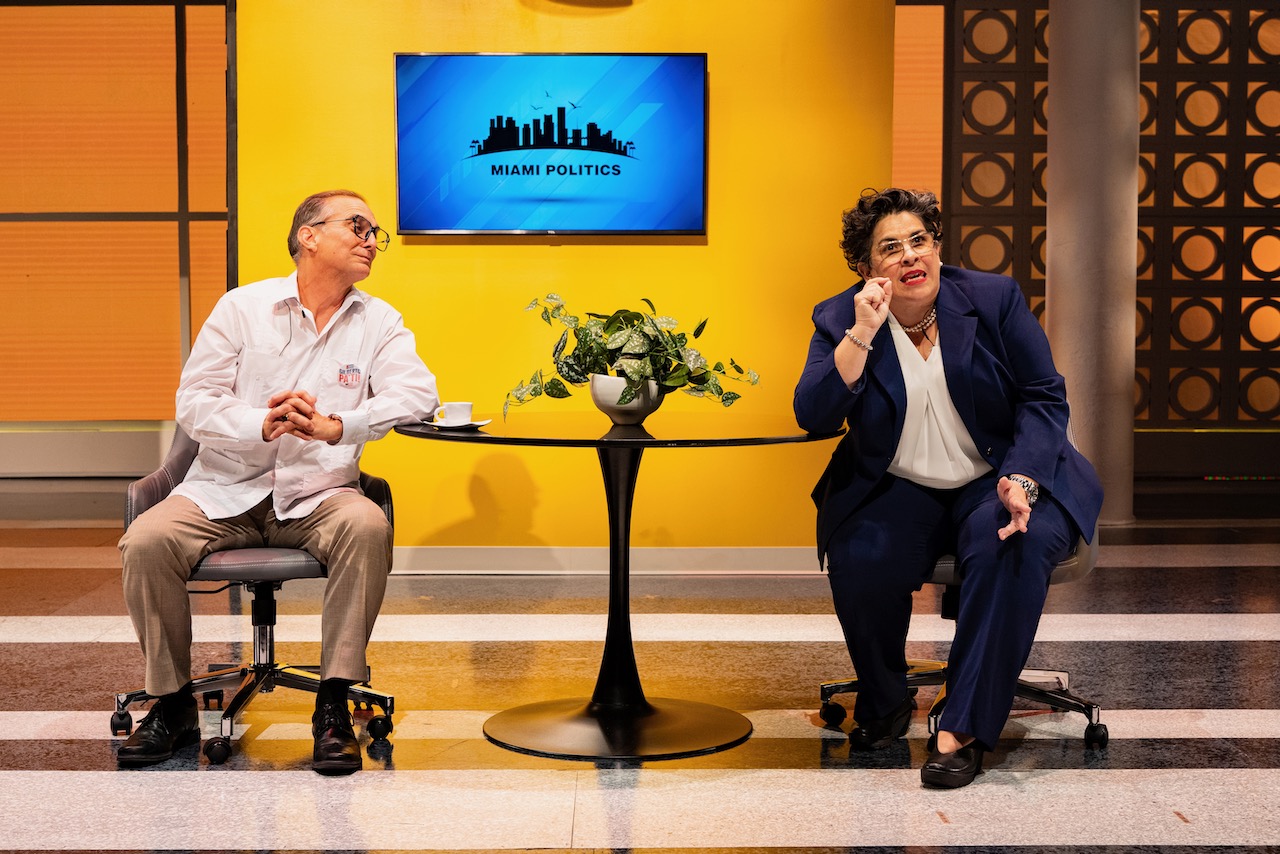 Jonathan Nichols-Navarro and Carmen Pelaez debate the issues in the world premiere of her play “The Cuban Vote.” (Photo courtesy of Stian Roenning)

A fight-to-the-finish Miami-Dade mayoral campaign meets gentle romance, a bit of Shakespearean inspiration and lots of affectionate satire in “The Cuban Vote” by Carmen Peláez.

Commissioned by Miami New Drama, the comedy is getting its world premiere and generating abundant laughs at the Colony Theatre on Lincoln Road. At the same time, the play is another key building block in co-founder/artistic director Michel Hausmann’s mission of creating theater that reflects and speaks to Miami’s diverse communities.

In her third Miami New Drama world premiere, the playwright (who has worked on many local and national political campaigns) got boisterous entrance applause from an opening-night crowd filled with actual Miami-Dade politicians – who then proceeded to laugh and nod knowingly at Peláez’s inside-béisbol take on their world as the comedy unfolded.

The story in brief: Despite Carolina’s solid experience working with her late father, a former Miami-Dade mayor, her poll numbers are faltering, thanks in part to an easily ignited temper and her refusal to reframe any of her messages in a less confrontational way.

That polished political knight is an old Miami friend, Alex Mesa (Andhy Mendez), now a sought-after Washington D.C. consultant with an unblemished track record. He’s both savvy and dreamy, and it isn’t long before the initially testy Carolina starts to soften, though she keeps on fighting hard for her vision of a more progressive, caring Miami.

After her chief opponent drops out of the race, the final puzzle piece slips into place. In a move patterned after the Christopher Sly prank at the beginning of William Shakespeare’s “The Taming of the Shrew,” Alex and Benji recruit barfly Gilberto Ruiz (Jonathan Nichols-Navarro) to run against Carolina, certain that the guayabera-sporting, slogan-spouting viejo will be easy to beat. Pero eso no es verdad. 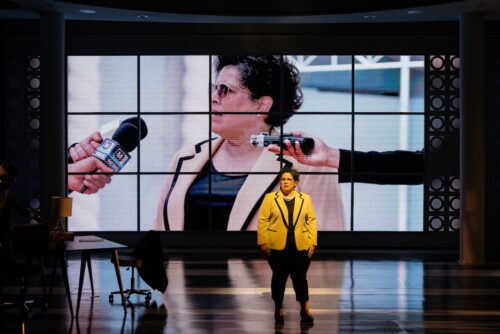 As delivered by Peláez, Greco and company, “The Cuban Vote” is both rollicking satire and a resonant, well-informed cautionary tale. The comedy underscores the fact that Miami-Dade’s vast Cuban-American voting bloc is not a monolith, neither purely red nor blue, but a group that includes traditionalists, progressives and everyone in between.

As this is a play about a campaign, debates, interviews and speeches are part of the package, and sometimes the rhetoric slows the momentum. Some surgical trimming could keep the production, which runs about an hour and 45 minutes with no intermission, hurtling along in a more consistently engaging way.

Among its myriad topics, the script also takes on disinformation-dealing Spanish radio talk hosts, the privilege enjoyed by wealthy men whose belief systems were forged in Miami’s pricey private schools, and the sizeism that imagines larger people are somehow inferior or less deserving of happiness than others. To wit: 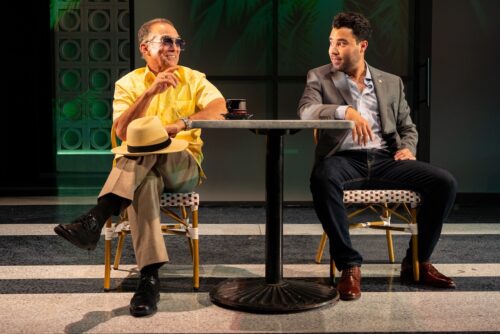 In their final debate, Gilberto finishes his answer to a question about climate change by saying, “Let the seas rise. I float! [To Carolina] Especially you, gorda!”
Painful though common as that barb may be in Carolina’s life, as the playwright, Peláez has crafted a more-than-worthy opponent in Gilberto Ruiz. From the moment that he transforms from barely sentient drunk into a persuasive politician with a manufactured back story, Nichols-Navarro owns the stage every time he’s on it.

Slender though the actor may be, his Gilberto is a type, a man who fills any room with his outsized personality, his declarations that Carolina’s ideas smack of comunismo or socialismo, his dated aviator glasses and toothy grin and fat hand-rolled cigar. His performance is, plain and simple, a comic treasure.

As Carolina, Peláez has a great deal to shoulder, including extensive dialogue. She must delineate the many issues that drive the candidate while transforming from a woman who habitually lives inside a protective emotional shell into someone open to romance. The political content proves to be her strong suit, the budding romance not so much.

But for the latter, she has a wonderful scene partner in Mendez as Alex, who is as surprised as Carolina when he starts falling for his client. An accomplished Miami actor with significant theater, film and television credits, Mendez comes across as genuine and sympathetic, and his playfulness in the Carolina-Alex relationship helps build an affectionate bond. 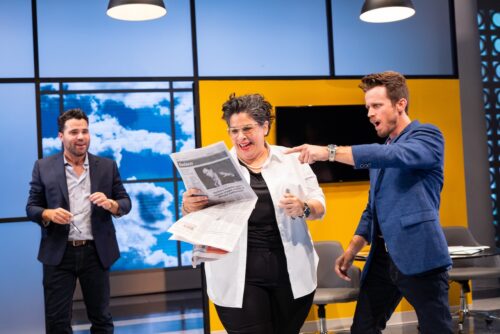 Also eminently believable is Perez as Ofelia. Costume designer Alex Jaeger has made the woman with the elegant blonde updo look perpetually chic, and the actor persuasively conveys the career sacrifices that she, a highly educated woman, made to further her family’s success. She’s also a master at getting her difficult daughter’s attention when she barks a genteel “Carolina Maria!” at precisely the right moment.

Benji and Blanca are young, striving Miami types, and Bikic and Paguaga play them as such. Bikic’s Benji, whose actions, attire and styling scream “notice me!,” is generally the loudest and most intrusive guy in any room. Paguaga’s attractive Blanca, sincerely dedicated to helping her sister become mayor, is an influencer as stereotype, a woman who lives for coupling a hashtag to just about any phrase.
The high-level storytelling in “The Cuban Vote” would literally (to borrow one of Blanca’s favorite words) not be possible without the production’s design team, particularly the collaboration of scenic designer brothers Christopher and Justin Swader and projection designer Yuki Izumihara.

They are magicians, summoning to the Colony stage everything from the iconic elements of Little Havana to the hanging gardens at the Pérez Art Museum Miami. Together with composer and sound designer Obadiah Eaves, lighting designer Mary Ellen Stebbins and costume designer Jaeger they bring fast-moving 21st century Miami to life. Watch, for instance, as the two candidates frantically work the final hours before the polls open – that’s some genius staging, for sure – and consider how many artists brought that moment to life.

“The Cuban Vote” is written in English, but as in Miami itself, plenty of Spanish mixes and mingles with the dialogue, sometimes within the same sentence. Will you grasp the most if you’re fully bilingual? Sure, but Peláez skillfully contextualizes everything so that understanding is seldom a problem. Ditto with whether you happen to live in Miami-Dade or recognize every reference in the script. The play speaks to its intended audience – and to anyone else who cares to listen and laugh.