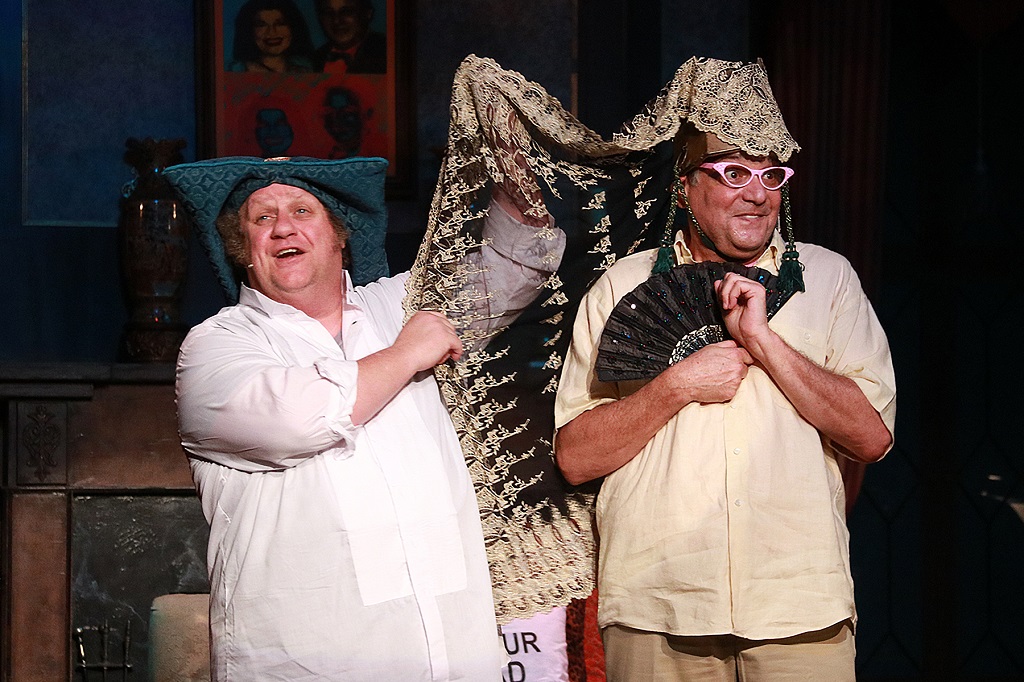 When a theater company has been around for three decades, as Actors’ Playhouse has, it’s not surprising to see past hits pop up in new seasons.

Through the years, artistic director David Arisco and executive producing director Barbara Stein have offered their audiences multiple productions of such titles as “Evita,” “Oliver!,” “West Side Story,” “Million Dollar Quartet,” “I Love You, You’re Perfect, Now Change”– and now, for the third time, the zany musical “The Big Bang.”

Created by composer Jed Feuer and book writer-lyricist Boyd Graham, “The Big Bang” had a short Off-Broadway run in 2000 before finding an ongoing life in regional theaters. Actors’ Playhouse first presented it in 2003, then again in 2005, now again in 2018.

And why not? The show is an affordable two-person musical with an onstage pianist, plus an upscale set integral to its clever Carbonell Award-winning costume design. Offering audiences (some probably too young for the previous “Big Bang” productions) escapist laughs, the show provides 90 minutes of silliness as a respite from weighty reality.

“The Big Bang” is structured as a backers’ audition for a grandiose, impossibly huge musical that is unlikely ever to see the lights of a stage. Viewing the audience as potential investors, the “creators” (actors Ken Clement and Nick Santa Maria) promise an $83 billion budget, a cast of 318 and a history-of-civilization epic guaranteed to provide “12 hours of pure ecstasy.”

With musical director David Nagy at the piano, Clement (who was in the two earlier editions of “Big Bang”) and Santa Maria (new to the show) excitedly pitch their creation, setting up each number, then singing the songs solo or as a duet. Some of the comedy is clever, some broad, some based on stereotypes that come this close to being offensive (think Nefertiti as a black diva with a distinctive accent/speech pattern, or two Asian “ladies” straight out of a Charlie Chan movie).

As performers, Clement and Santa Maria bring different skill sets to the stage.

Clement’s work is grounded in his theatrical training and experience; he’s quite funny, but he brings a layered interpretation to his performance, as when he summons the song stylings of the late Marlene Dietrich to sing “Loving Him” (an ode to Hitler) as Eva Braun.

The energetic Santa Maria brings a standup comedy/improv sensibility to his work, a skill that came in handy on opening night. Several patrons who had availed themselves of the company’s traditional open Bacardi bar got up during the performance, edging their way out of their row of fellow theatergoers to visit the facilities. Santa Maria seamlessly added their departures into his scripted lines, exacting a teeny bit of revenge and earning more laughs.

In their stroll through history, the guys play Adam and Eve, Caesar and a soothsayer, the Virgin Mary and Gandhi’s mom, Columbus and Queen Isabella, Pocahontas and Minnehaha, Napoleon and Josephine, Nefertiti, Attila the Hun and more. Their solos are good, their blend even better, as the indefatigable Nagy accompanies them and occasionally joins in the action.

With Santa Maria and Clement, director Arisco doesn’t achieve the magic chemistry that Clement shared in the first two productions with actor Gary Marachek, who is now appearing Off-Broadway in the musical “Desperate Measures.” Though the show is often frenetically paced, it plays like a long 90 minutes.

Particularly for those who have never seen “The Big Bang,” the production has enough snap, crackle and pop to get audiences laughing. But this time around, the musical isn’t the comedic explosion its creators intended.