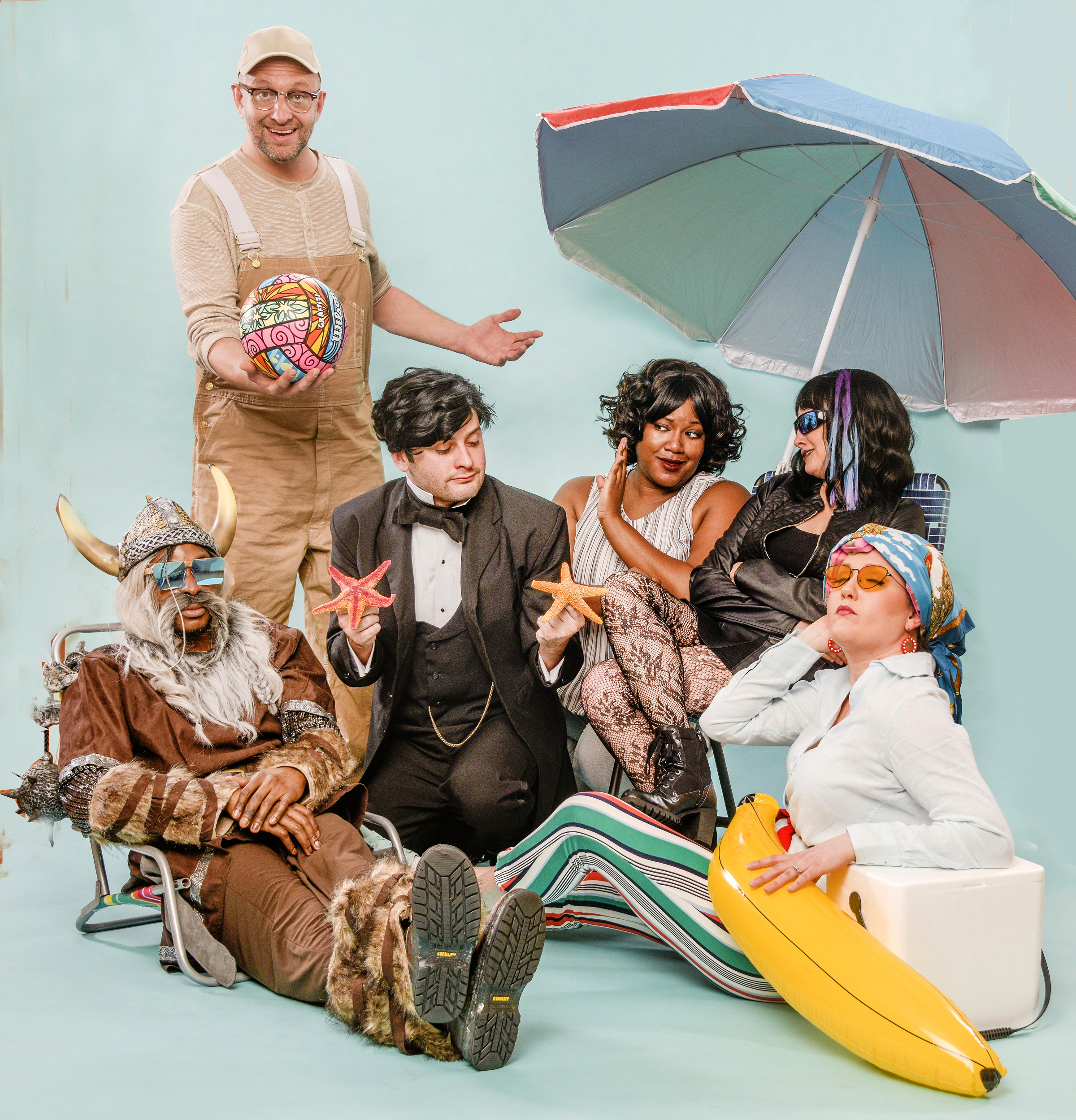 City Theatre’s Summer Shorts festival, the start to the less-crowded summer arts season, turns 24 this year. This year’s lineup of six short plays and two mini musicals is, of course, eclectic and playful. But beneath the summer fun, meaningful ideas and issues are afoot.

A police trainee has to make a split-second decision about shooting a black man with a briefcase that may or may not hold a gun. A housewife has an existential crisis in her supermarket’s frozen food aisle. A woman from HR has her most challenging assignment to date: giving sexual harassment training to a trio of Vikings. As climate change is doing its worst, a regular guy is building an ark, per the Big Man Upstairs.

“This year, we have a lot of things on our minds,” says Margaret M. Ledford, the company’s artistic director. “If nothing else, we should have the difficult conversations.”

The festival, which previews Thursday-Friday, May 30-31, before its official opening at 7:30 p.m. Saturday, June 1, in the Carnival Studio Theater at Miami’s Arsht Center, was the brainchild of Susan Westfall, Stephanie Norman and Elena Wohl. Then, they were three theater professionals with young children. Now, both their real kids and their artistic baby are all grown-up, and Westfall remains the only founder still involved with the company.

Westfall, who serves as City Theatre’s literary director, has a passion for short-play work that hasn’t diminished one iota. “Someone asked me, ‘Isn’t it boring?’ It isn’t. It’s like Christmas, and every year there’s something else under the tree,” she says. “Writers are obligated to reflect the times we live in — and they are.” 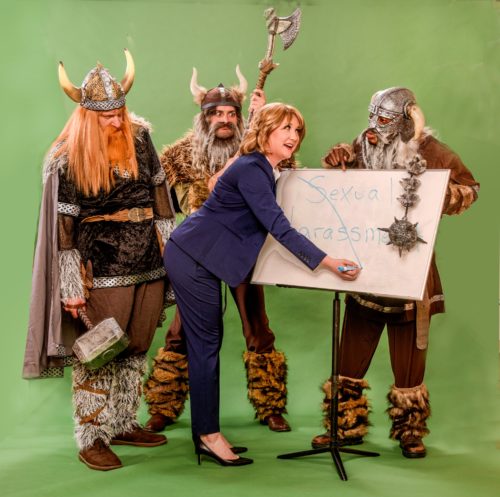 The plays and musicals on this summer’s menu are a varied lot and include a trio of world premieres. Steve Yockey’s City Theatre-commissioned “Telephones and Bad Weather,” directed by Andy Quiroga, features a continuous downpour, a frustrated wife, complaining neighbors and an ark-building husband who claims it’s God on the other end of increasingly frequent phone calls.

Lia Romeo’s “The Presentation,” staged by Ledford, is the one about the HR rep and her unruly audience of less-than-gentlemanly Vikings. Another Ledford-directed play, Jen Diamond’s “This Is How Ghosts Speak,” centers on three theater workers who encounter the otherworldly while dealing with a blackout.

Jeff Locker’s “The Forgotten Place,” staged by Gladys Ramirez, features a guy conducting a job interview to hire a best friend; amusing at first, it becomes poignant and deep, offering up a life’s journey in the space of 10 minutes. Ramirez is also the director of Greg A. Smith’s intense “Schrödinger’s Gun” (the play takes its title from the famous Schrödinger’s Cat quantum-mechanics thought experiment), about a would-be cop’s life-and-death training session.

Director Michael Yawney is staging both Ian August’s “Frozen Foods,” about the mom flipping out in the supermarket, and “Franklin Pierce: Dragon Slayer,” a short musical by composer Will Buck and lyricist-book writer Preston Max Allen. The latter focuses on an eighth grader annoyed that she has to present a report on boring Franklin Pierce, only to have the 14th president of the United States appear and crazily try to rewrite his place in the history books.

Ledford is staging what could be Summer Shorts’ comedic slam dunk, the world premiere of the short musical “Big Fat Cow.” With book and lyrics by Hillary Rollins and music by William Johnson, the musical features Gregg Weiner as Elsie, Borden Dairy’s iconic mascot, a former heifer/hoofer reminiscing about her dewy past and bemoaning her drooping present.

The Carbonell Award-winning Weiner, who is acting in his fifth Summer Shorts, concedes that his starring gig in “Big Fat Cow” is the most challenging of his four roles in this year’s program, and he’s grateful for extra work sessions he’s had with director Ledford and musical director Caryl Fantel.

“Elsie has been the most work,” Weiner says. “I’m not trained as a musical-theater guy, and I don’t pick things up as quickly.” 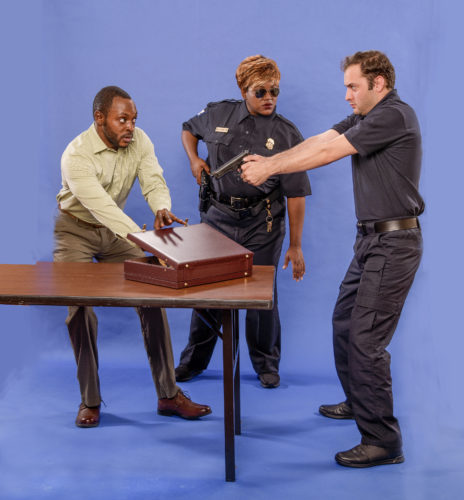 Weiner’s fellow actors are Lindsey Corey, Daryl Patrice, Jovon Jacobs, Brian Reiff and Hannah Richter, the only newcomer to Summer Shorts. All agree that moving from first rehearsal to first preview in just 2 ½ weeks is an intense process. But they savor the short-play festival format, for themselves as performers and for audiences.

Both Jacobs and Patrice are in “Schrödinger’s Gun,” Jacobs as the man with the briefcase, Patrice as a black sergeant overseeing the white rookie, played by Reiff. Because of the play’s theme — police violence against black people, particularly men — the actors are particularly invested in the piece.

“It’s difficult, important, relevant, close to me personally,” Jacobs says. “It’s a lot for me to deal with. I gotta represent.”

If not for Summer Shorts, the Carbonell-winning Corey might be pursuing her career in some other city. “My first Summer Shorts was in 2008, when I had just graduated from college at New World School of the Arts. It’s why I stayed in Florida,” she says. “It’s a cool platform for playwrights to get their work seen. And it’s also great for the interns — they’re really a part of it.”

Reiff and the New York-based Richter, who went to high school together in Denver, appreciate the way Summer Shorts draws both theater fans and those who rarely set foot in a theater.

“Summer Shorts appeals to a lot of nontheater people,” Reiff says. “My roommate says he just has to go.”

“People are so used to watching TV, so used to comedy like ‘Saturday Night Live.’ This is easily relatable in an episodic way. Then, it’s like you change the channel,” Richter adds.

The directors, too, get to demonstrate their versatility with their different Summer Shorts pieces.

Yawney, who teaches theater at Florida International University, describes “Franklin Pierce” as “a Wagnerian drama of epic proportions set in a little girl’s bedroom.” He calls “Frozen Foods” a “cosmic drama set in a supermarket” and pronounces it one of the best 10-minute plays he has ever seen.

Quiroga believes Summer Shorts is a good thing, particularly for the region’s younger actors and broader audiences. “It’s a great starting place in particular for South Florida actors coming out of college. If you’re not seasoned, you often don’t have much of a shot here,” he says. “Also, it’s not too heady. It’s quick and easy, something for the casual theater person to enjoy. It’s not a Chekhov play. But it has enough substance.”

Yawney loves the topicality of the plays, as well as what the Shorts experience does for the entire company.

“Short plays respond to the zeitgeist really quickly. They respond to the mood of Miami and the mood of the moment,” he says. “And everyone comes out of Summer Shorts better than they went in. Everyone’s range expands. It’s like going to theater gym.”