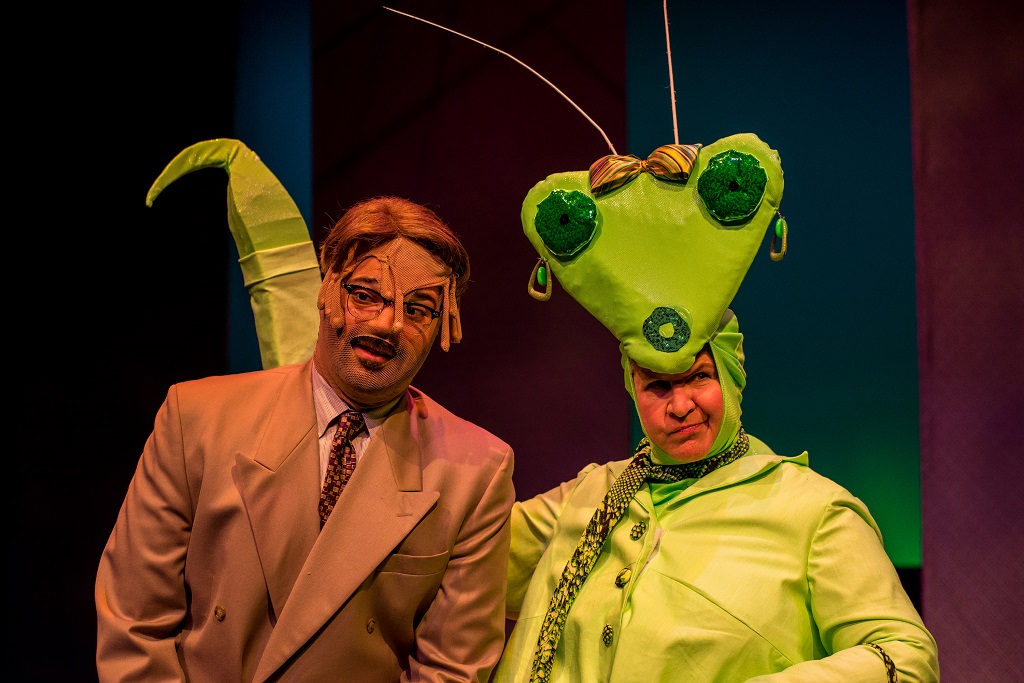 City Theatre’s Summer Shorts Festival is a distinctive, highly anticipated event in South Florida cultural firmament.  And as the newly opened 23rd edition of the short play fest in the Carnival Studio Theater at Miami’s Arsht Center demonstrates, the company’s work is shining as brightly as ever under the discerning guidance of artistic director Margaret M. Ledford.

You say you love musicals? This year’s Summer Shorts is bookended by two delightful ones, “The Almost In-Laws” by Greg Edwards and Andy Roninson, and “One More Time,” a Mark Harvey Levine play that happens to include one extremely well-known Disney earworm.

Different kinds of duos seize the spotlight in Bekah Brunstetter’s “Run” (about a dad trying to get his brainy and out-of-shape teen daughter to be more active), Sheila Cowley’s “Duck” (an older couple gently squabbles and reminisces as the two try to pare down their possessions) and Ken Weitzman’s “Covenant (…or bagels and butchery),” centering on a loving mixed-faith couple verbally jousting over their infant son’s about-to-happen bris.

And in Audrey Cefaly’s “Bloodbath at the Fillmore,” a best-selling author’s midlife crisis is writ small – and very, very well.

A half-dozen actors demonstrate their chameleonic prowess in this year’s festival, and experiencing their craft and versatility is one of the greatest pleasures of watching such a varied program.

Alex Alvarez, for example, belts his embarrassment about his Christmas-obsessed parents in “The Almost In-Laws,” then plays the pushing-too-hard dad in “Run,” a funny tax man (and victim of an industrial accident) in “Melto Man and Lady Mantis,” the Jewish dad still struggling with his motivations for the bris in “Covenant” and one rebellious animatronic Russian in “One More Time.”

Daryl Patrice, a newcomer to Summer Shorts, is wondrously versatile as the fiancée who teaches her beloved a thing or two about respecting parents in “The Almost In-Laws,” the frustrated teen who just wants to be heard and acknowledged in “Run,” a put-upon and terrified friend in “bedtime,” a hilariously over-her-sole-client literary agent in “Bloodbath” and a dizzy ballerina in “One More Time.”

Diana Garle plays the aroused cat owner in “Ailurophobia,” the amusingly exploitative and doubtless crazy friend in “bedtime,” the stage manager and author-to-be in “Bloodbath,” the challenging and dryly funny wife in “Covenant” and a Chinese doll on a mission in “One More Time.”

Marquise Rogers is the guy with a highly understandable aversion to cats in “Ailurophobia,” a smitten house manager in “Bloodbath” and a charming cowpoke in “One More Time.”

Shorts veterans Tom Wahl and Elizabeth Dimon bring an impressively burnished craft to their multiple roles, first as a couple of unusual expats in “The Almost In-Laws,” then as the long-married pair in “Duck.” Wahl is hilarious and extremely persuasive as Jinx, the feline romance interrupter in “Ailurophobia” (someone’s been watching cat videos); the writer-in-crisis in “Bloodbath;” and a riotously deadpan Hula Boy in “One More Time.”  Dimon also plays Lady Mantis, a mutant beginning to explore her power in “Melto Man and Lady Mantis;” the writer’s annoyed and cajoling sister in “Bloodbath,” and a cheery Dutch Girl in “One More Time.”

Ledford (who directed “bedtime,” “Melto Man and Lady Mantis” and “One More Time”), Clive Cholerton (who staged “The Almost In-Laws,” working with musical director Caryl Fantel), Michael Yawney (director of “Ailurophobia” and “Run”), Gail S. Garrisan (who staged “Duck” and “Bloodbath at the Fillmore”) and Jessica Farr (director of “Covenant”) have all done a first-rate job of bringing the writers’ scripts to life, teasing out the thematic intricacies, working with the performers to establish relationships that seem enduring rather than a result of wizardry in the rehearsal room.

The design team has created nine disparate worlds.  Set designer Jodi Dellaventura, for instance, serves up a woodsy home that is revealed as a Christmas wonderland for “The Almost In-Laws,” then supplies the creepy environment for “bedtime,” as  lighting designer Eric Nelson piles on with perfectly timed lightning.

Sound designer Steve Shapiro starts things off with a summer music hit parade, then keeps each show flowing into the next with a tune reflecting what the audience has just seen; he also adds a mutant creepiness to Dimon’s voice in “Melto Man and Lady Mantis,” and supplies the low chatter of relatives awaiting the bris in “Covenant.”

Ellis Tillman, whose inventive Summer Shorts costumes range from comically outlandish to subtly communicative, outfits elves and familiar Disney dolls; creates Alvarez’s blob-like look and Dimon’s praying mantis chic in “Melto Man and Lady Mantis” (her boots, purse and scarf are all coordinated); and underscores the young couple’s bond in “Covenant” by putting him in a yarmulke that matches the maroon hue of her wrap dress.

Short plays and musicals, about one-tenth as long as full-lengths, may seem simpler to pull off. But the really good ones have a beginning, a middle and an end, and they instantly plunge you into a world that absorbs you – until the next entirely different world comes along. That’s the magic of short-form theater, and this year, City Theatre and Ledford have conjured an especially strong program.