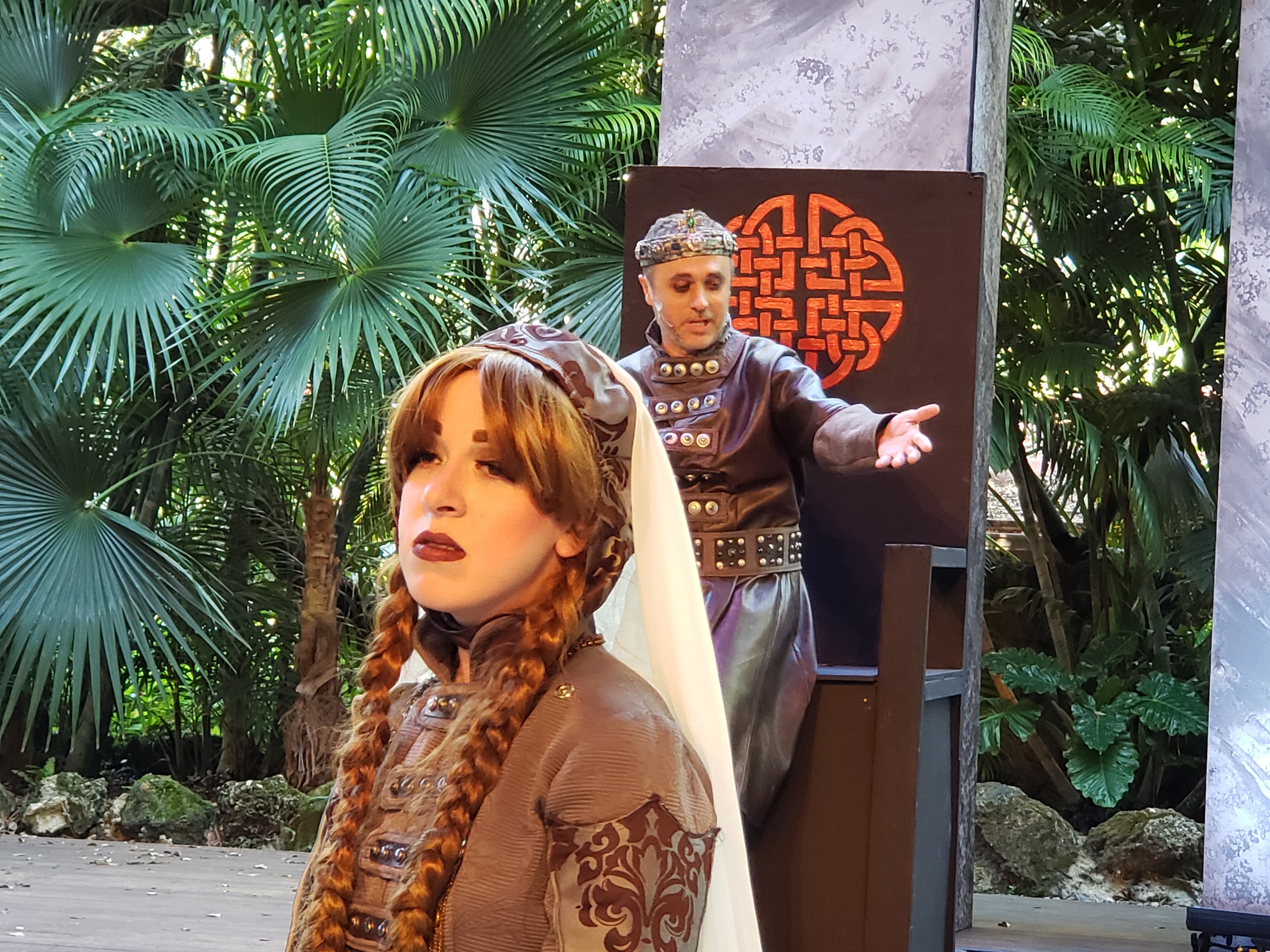 Sara Grant and Seth Trucks will lead the cast of Florida Shakespeare’s “Macbeth” in a virtual reading. (Photo courtesy of Colleen Stovall)

South Florida theater companies are coming up with myriad ways to engage theater-lovers until live productions can resume.

Here’s a look at what’s on the horizon:

Florida Shakespeare Theater is keeping fans of the Bard happy with its “Go Big or Go Home” series of free livestreamed readings directed by artistic director Colleen Stovall. “Macbeth,” featuring Seth Trucks in the title role and Sara Grant as the calculating Lady Macbeth, is set for 8 p.m. May 23. “The Merchant of Venice” will be read at 8 p.m. June 6; “A Midsummer Night’s Dream” at 2 p.m. June 20; “The Tempest” at 8 p.m. July 11; and “Hamlet” at 2 p.m. July 25. Watch on the company’s Facebook page, Facebook.com/floridashakes.

Slow Burn Theatre Co.’s artistic director, Patrick Fitzwater, is hosting “In the Green Room LIVE!,” a series of conversations and performances with past Slow Burn stars. On May 24, the guests are Clay Cartland and Kimmi Johnson, stars of this season’s “Groundhog Day.” Musical director Manny Schvartzman, who most recently toured with “Hamilton,” speaks with Fitzwater on May 31. “Shrek” stars Wesley Slade and Reynel Reynaldo visit with Fitzwater on June 7. And “Priscilla Queen of the Desert” stars Michael Ursua, Kyle Laing and George Pellegrino are the guests on June 14. Catch the talk and music at 6 p.m. Sundays at Facebook.com/Slowburntheatre.

Actors’ Playhouse in Coral Gables – heading toward what it hopes will be the live-on-stage semifinals (Aug. 29-30) and finals (Sept. 13) of its annual Young Talent Big Dreams competition – is featuring performances from a number of its past stars on its YouTube channel. The “At Home With Actors’ Playhouse” series highlights songs from Gwen Hollander, Tally Sessions, David Michael Felty, Reggie Whitehead, Jodie Langel, Sean Patrick Doyle, Sarah Amengual, Scott Moreau, Erica Lustig, Samuel Druhora and others. Watch at Youtube.com/user/ActorsPlayhouseCG.

Miami New Drama’s “MasterMiND” series continues with new sessions, as well as archived previous programming. Artistic director Michel Hausmann will speak on “Running a Theater: The Role of Artists in Society” from 11 a.m. to 1 p.m. May 21. Carbonell Award-winning scenic designers (and brothers) Christopher and Justin Swader will discuss their design process from 11 a.m. to 1 p.m. May 25. Both sessions are free. Peter Romano and Brynne McManimie will explore the actor’s approach to classical texts from 3:30 p.m. to 5:30 p.m. May 26 and June 2, with fees ranging from $50 to $100. Register for these sessions and get more information at Colonymb.org/mastermind.

City Theatre, which has delayed its 25th anniversary edition of Summer Shorts until June 2021, is creating a series of Facebook Live events moderated by artistic director Margaret M. Ledford. Live Theatre +, set for May 28, will offer readings of new and favorite short plays. Director and former City Theatre artistic director Gail S. Garrisan, director John Manzelli and performer/director Elena Maria Garcia are the May 21 guests on “Small Talks” (future sessions are June 5 and June 18). “Behind the Shorts,” featuring different theater makers, will return June 14. Catch these events live at 7:30 p.m. on the company’s Facebook page: Facebook.com/CityTheatreMiami or watch later at Citytheatre.com.