Sonia Braga Returns to the Screen in ‘Aquarius’ 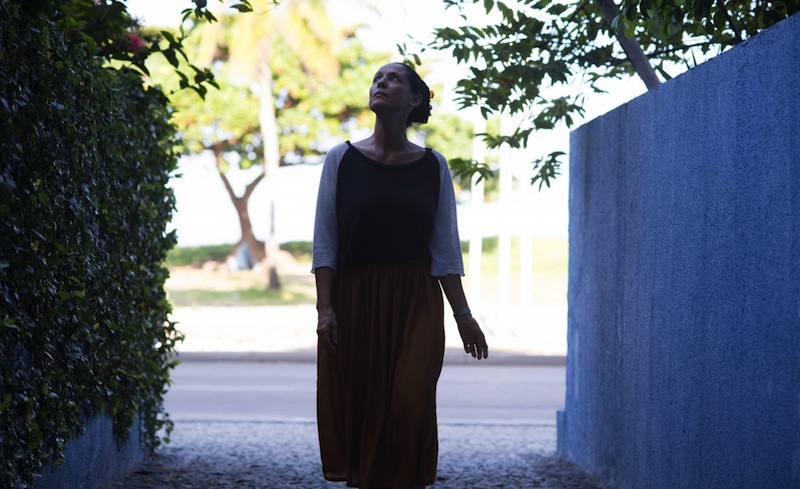 Kleber Mendonça Filho’s Aquarius (2016) is a masterful and engaging film exploring the dilemma of a singularly strong-willed, exceedingly attractive older woman who refuses to budge when power comes knocking at her door and tries to blow it off its hinges. A relative newbie to the director’s chair, Mendonça is a former film critic who layers a rich texture of skillfully developed metaphors, fully realized characters and believable dialogue over a simple plot in this, his second feature film.

Clara, not so much played as inhabited by the still-stunning Sonia Braga, is a 65-year-old former music critic living in a small, older apartment building across the street from the beach in Recife, Brazil. It gradually emerges that she is the last holdout in this ghost building after all of her neighbors have sold out to the big developers who want to tear the place down to make way for a luxury high rise.

Braga’s performance as this feisty, indomitable woman is controlled and subtle. Although she is a fierce adversary, Clara speaks in carefully modulated tones, seldom raising her voice. While outwardly observing all rules of civilized decorum, she always manages to say exactly what she thinks. Some real estate moguls would consider her a “nasty woman” indeed, as she fights unflaggingly for the right to stay in her home with nearly everyone around her urging her to cave.

Aside from her sheer stubbornness and the fact that she has lived most of her life in this very spot, another aspect of Clara’s motivation is revealed through the beautiful shots of the ocean that is practically at her doorstep. She ritualistically takes a daily swim, even when the lifeguards warn her that the waters are too rough. The camera captures her emerging from the sea like a latter-day Venus, darker and more mature than Botticelli’s version, but every bit as sexy.

Along with the sounds of the water, what is most prominent in the film’s soundtrack is the music that Clara cannot live without. Her spectacular record collection plays throughout much of the film, with all of the music we hear heard by the characters, too. Roberto Carlos, Gilberto Gil, Maria Bethânia and other greats of the Tropicalia movement continue to provide the musical background to Clara’s life, emphasizing the comforting presence of the past as a living and cherished part of her daily existence.

Another poetically effective unifying device in the film is the small wooden sideboard that sits in Clara’s living room, an inheritance from her Tia Lúcia, a fully liberated, sexually alive woman whom we meet only briefly at her 70th birthday celebration in the first of the film’s three sections. As she is toasted at the party, she glances at the sideboard and smiles, remembering in a flashback her younger self and that piece of furniture’s prominent role in her clearly satisfying sex life.

Her niece Clara has followed in her footsteps in that regard, so this is just the first of a number of graphic sex scenes in the film. (If the deliciously leisurely pace of this nearly two-and-a-half hours long movie were not enough to keep the kids away, the shots of multiple partners in flagrante delicto should seal the deal.)

Braga herself was on hand at the Coral Gables Art Cinema after Saturday evening’s showing for a Q & A with the audience, and when I asked her if, like Clara, she had any special feeling for the ocean she deadpanned, “Yes…Panic.” Although she said that she and Clara have much in common, Braga laughed as she revealed that she herself never learned to how to swim.

Another audience member thanked Braga for “portraying a woman of a certain age in a sensual and sexual manner.” Both in this and in the film’s depiction a solitary woman’s power to turn back the tides of change when they are not sweeping her towards a better future, Aquarius makes a decidedly feminist statement, one that both genders would do well to consider.