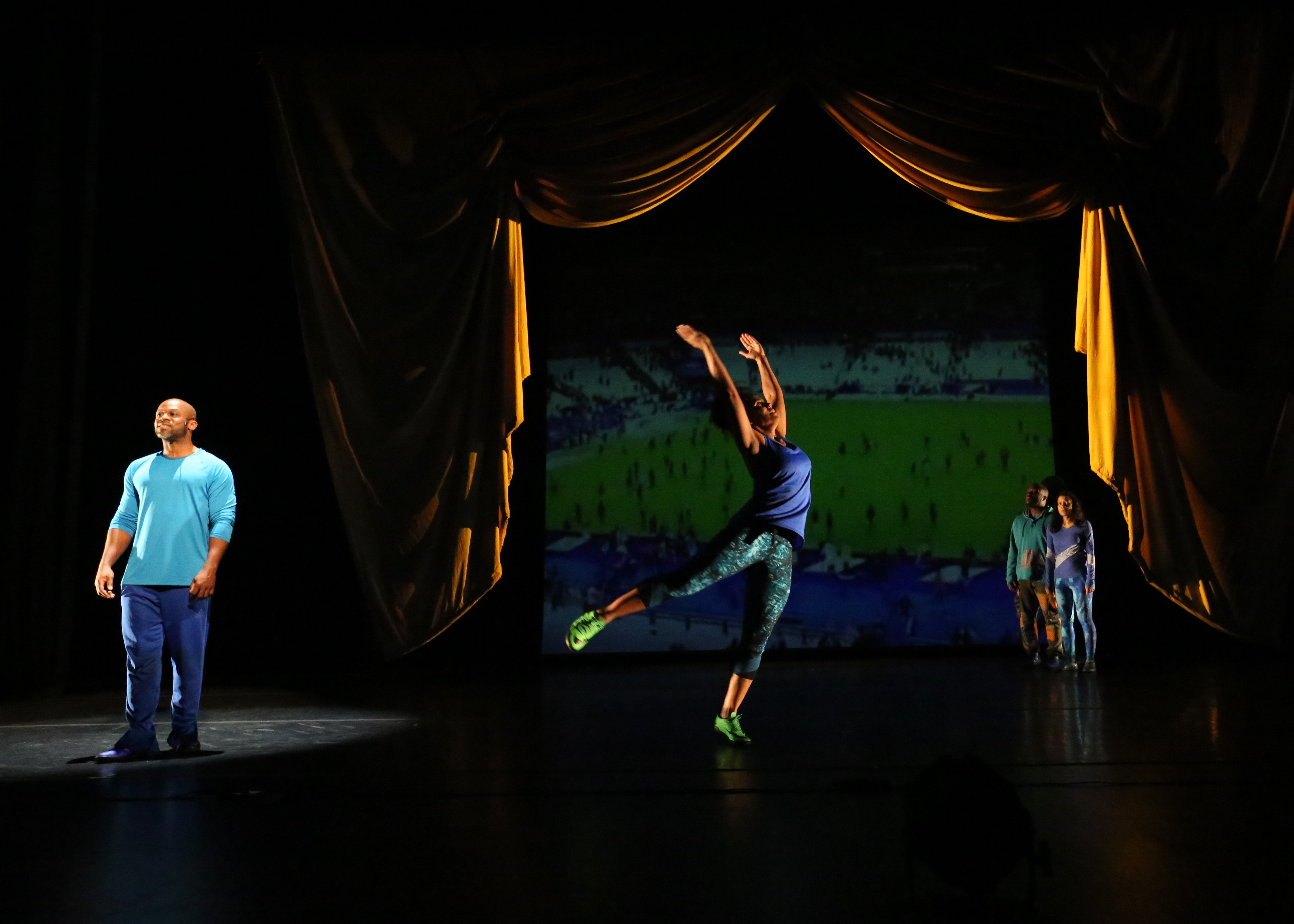 In a show that combines spoken word, dance and rap, Joseph meshes his love of fútbol with social-justice issues. A New Yorker of Haitian descent, he tackles topics such as immigration, gun violence, corporate greed, Black Lives Matter and the controversy over NFL players taking a knee to protest police brutality.

What does all this have to do with soccer? Plenty, Joseph says.

A  trip to the 2010 World Cup in South Africa inspired Joseph to think about how the game affects societies in which the sport is played. Even as the country was experiencing the excitement of displaying its culture to the world, Joseph thought, many South Africans were fighting for freedom within an unjust system.

“All the investment, all of the infrastructure that was being built to support the World Cup — that wasn’t necessarily supporting the people that were most devastated by the legacy of apartheid,” Joseph says. “There is still a fair amount of segregation that we find in the country of South Africa, and so the infrastructure they were developing wasn’t necessarily reversing the effect of that segregation, and you find this all over. There’s money poured into stadiums, but not into transportation systems, not into energy grids. Even this game that brings the planet together, even this game that creates joy for so many people around the planet, even within the context of the game, there is a political underbelly that mirrors the worst aspects of our geopolitical reality.”

Joseph, whose other multidisciplinary works include “Black Joy in the Hour of Chaos” and “Red Black and Green: A Blues,” also was inspired by his son, now 17, while writing “/peh-LO-tah/.”

“The leading cause of death for people like him between the ages of 15 and 39 is a homicide,” Joseph says. “Also, black people make up 13 percent of the United States population but 40 percent of the prison population. I want to think we’re not instinctively drawn to criminal behavior. There are systemic factors that play into why these things exist.”

In addition to addressing serious issues, Joseph wants “/peh-LO-tah/” to convey the euphoria and excitement many soccer fans feel for the game.

“In a lot of ways, my American story as a child of immigrants is very much connected by a passion for the game,” he says. “My sense of happiness was developed via fútbol. My memories of joy I associate with scoring goals. When I think of pure joy, I think about being 6 or 7 years old on the fútbol pitch scoring goals and what that feeling is in my body. You see what happens to grown men and women when they score, and you also see what happens to an entire country when their team scores. You don’t have to play to understand that feeling — a goal has the potential to literally change the mood of an entire country.”

Joseph says “/peh-LO-tah/” has plenty to offer people who don’t consider themselves soccer fans. “I think one of the great strengths of the piece is that if you’ve never played at all or are a fan of the sport, the poetry, the music and the choreography are still legible enough that you can really appreciate it as a piece of performance art,” he says. “But if you are a fan of the sport, there are so many little nuggets just for you.”