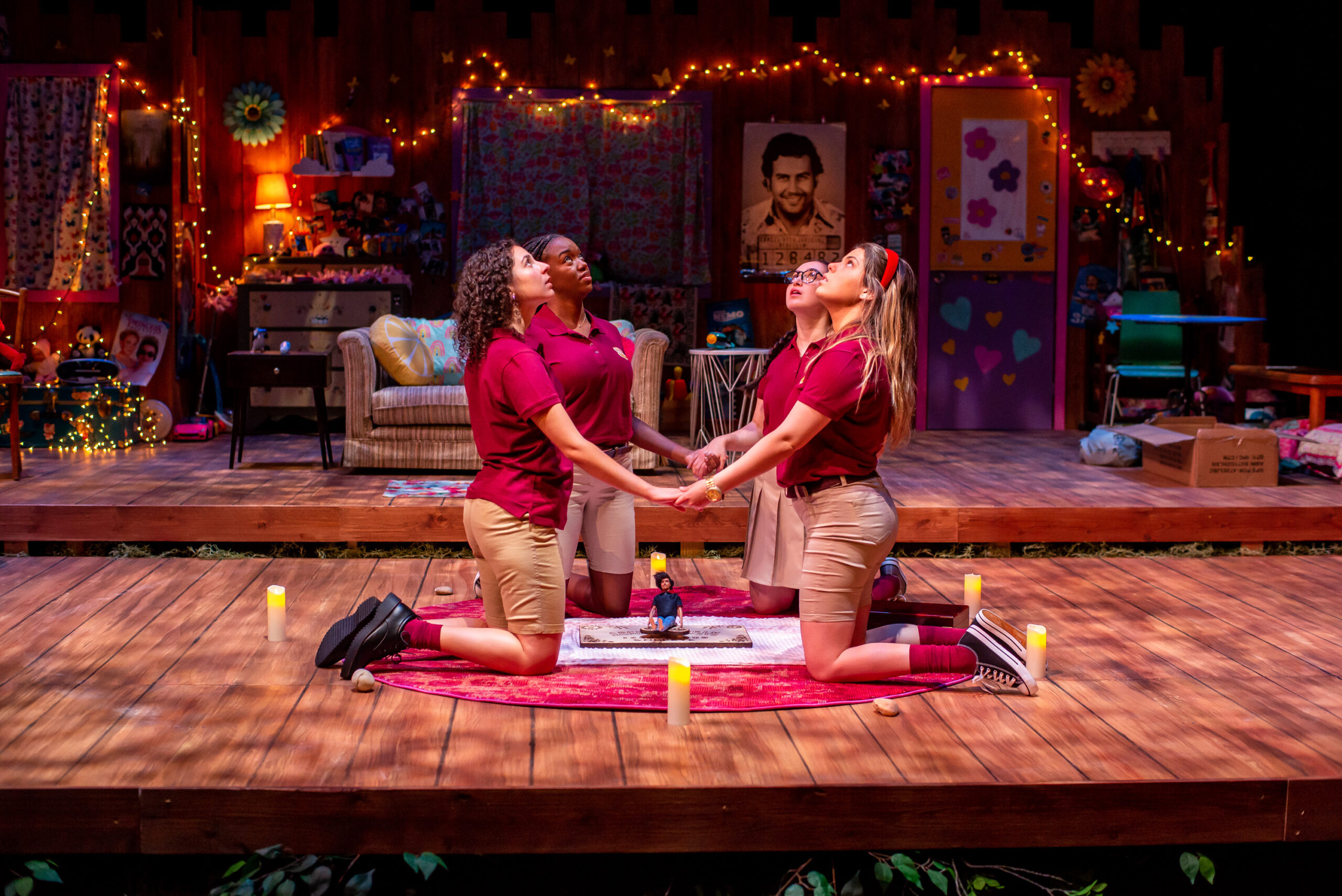 Any way you slice it, the path from childhood to adulthood is neither simple nor trouble-free. Evolving teens have to deal with forging an identity, transitioning into independence, and imagining, then becoming, their future selves. Love and loss enter their lives, sometimes in the same situation.

Zoetic Stage is closing out its season with a new production of the play in the Carnival Studio Theater at Miami’s Arsht Center, and as theatrical experiences go, it’s a doozy.

Co-directed by Zoetic artistic director Stuart Meltzer and Elena Maria Garcia, the genre-defying dark comedy (if you insist on classifying it) weaves plenty of observant laughs into the script, particularly if you happened to live in Miami circa 2008 when the story is set. But it’s also true that the blood rituals and gathering darkness of “Our Dear Dead Drug Lord” are there from the beginning, building steadily toward a horrifying, other-worldly yet transformational final scene.

The Colombian drug lord invoked in the title is the late Pablo Escobar, the infamous founder of the Medellín Cartel. He has become the latest study focus of the Dead Leaders Club (DLC), a school group that, back in the day, focused on President John F. Kennedy and other admired leaders. But the members’ previous choice, Adolf Hitler, got the DLC suspended.

Now, as the Barack Obama-John McCain presidential race is hurtling toward election day, the four girls are meeting in a surprisingly spacious treehouse to strategize and send a little antihero worship Escobar’s way. 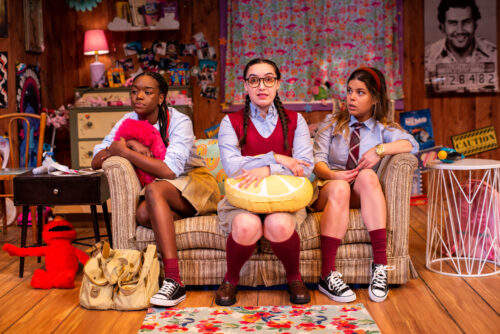 Known by the nicknames chosen for them in a revelatory ritual involving a Ouija board, the teens are distinct individuals, each representing a different facet of the Miami melting pot.

Pipe (Sofia Duemichen), the DLC leader and the one who took the club in its more controversial direction, is the daughter of Cuban-American Republicans. She’s domineering, insistent on just-so rituals, ready to out-shout the others if the overlapping talk grows too cacophonous. As she continues to grapple with the drowning death of a younger sister, she’s also struggling with how fully and openly to embrace her sexual orientation.

Squeeze (Mikayla Queeley), a theater kid who’s Haitian on her father’s side and Puerto Rican on her mother’s, is also dealing with tragic family loss – her depressed dad’s death by suicide. And she happens to be highly allergic to cats, a fact that forces Queeley to keep sneezing loudly through much of a first scene that begins in a kind of chaotic excitement and ends in a genuinely disturbing ritual.

Zoom (Rachel Eddy), at 15 and the youngest member of the group, is a Jewish girl with an outsized imagination. She’s the dramatic equivalent of an unreliable narrator, easily influenced, and though she insists she’s a virgin, she thinks she might be pregnant.

Kit (Gina Fonseca), the newest to the fold, is a Colombian-American who never knew her father. The DLC members take up the idea that just maybe she’s the daughter of Escobar and a prostitute. Despite the implications involving her single mom, cool Kit just goes with the flow.

Examining “Our Dear Dead Drug Lord” without giving away its darker twists and surprises is tough, but to do so would rob Zoetic’s audiences of their startling in-the-moment experiences. We will say that two more actors, Rio Chavarro and Tai Fruitstone, appear in the play but we’ll just leave it there. 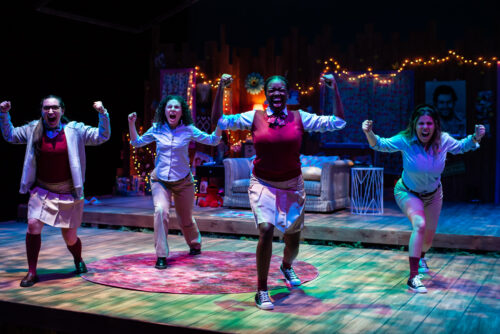 For Meltzer, Garcia, and intimacy director Jeni Hacker, staging Scheer’s play was as challenging as performing it is for the actors. The script’s use of overlapping dialogue requires split-second timing, and initially, the aural bombardment is tough to sort out, though the actors soon find a rhythmic groove.

One scene involving a sacrifice is made “real” through sound design and precise placement of the actors. A grisly later scene involves combat and bloody violence, and how the actors pull it off without anyone getting hurt is a minor miracle of staging.

At the playwright’s direction, a key interaction involves Pipe speaking English to another character who challenges her in Spanish, urging her to claim her power. Those lines are translated in the show’s digital program, but if you aren’t bilingual and don’t happen to read the translation before the show, you’ll miss the full impact of those exchanges. And they shouldn’t be missed.

The acting in “Our Dear Dead Drug Lord” is necessarily fearless, and Zoetic’s young cast of college grads etches compelling portraits of girls on the cusp of womanhood.

Initially overbearing, Duemichen makes Pipe a persuasive teen who works overtime to conceal her emotional damage. Queeley, who gets to sing a bit and lead a tribute dance to Squeeze’s father, is a more subtly commanding figure, and the crimson red woven into her braids hints at the violence to come. Eddy, whose Zoom sports little-girl braids, conveys her character’s quicksilver emotions and vulnerability to influence. Fonseca makes Kit a young woman of mystery, as irresistible to the audience as she is to Pipe. 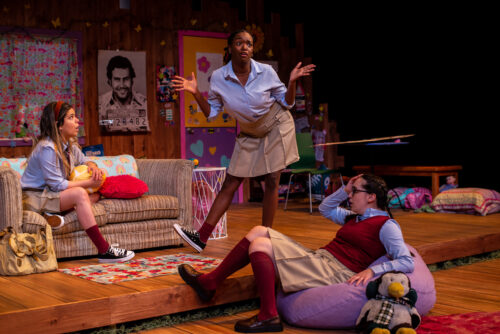 Sofia Duemichen, Mikayla Queeley and Rachel Eddy figure out life and each other in Zoetic Stage’s “Our Dear Dead Drug Lord.” (Photos courtesy of Justin Namon)

Jodi Dellaventura’s imposing treehouse set, a space made a bit cozier by properties designer Miriam Sierra and scenery-props assistant Shannon Veguilla, is a place decorated with flowers, stuffed animals, and an “isn’t-he-dreamy” poster made from Escobar’s mug shot. If you put it on the market today, it would sell in a nanosecond at way over asking price.

Lighting designer Tony Galaska is a wizard at shifting mood or summoning up a storm, as is sound designer Matt Corey, whose judicious use of thundering drums underscores the ritualistic magic to come. Together, Galaska and Corey become key players in creating the disturbing end-of-play magic.

Costume designer Marina Pareja largely works with the pale blue-burgundy-khaki palette of the teens’ school uniforms, but subtle variations in what the girls choose over the play’s four-month period convey individual differences.

If you see “Our Dear Dead Drug Lord,” you may find it deeply resonant, thought-provoking, and very different from Miami’s usual diet of naturalistic theater. Or you might find the storytelling a bit confusing or some key plot points too shocking to bear. But engage with it and you’ll discover a truth: Indifference to this play is impossible.

WHAT: “Our Dear Dead Drug Lord” by Alexis Scheer

WHERE: Zoetic Stage in the Carnival Studio Theater at the Adrienne Arsht Center for the Performing Arts, 1300 Biscayne Blvd., Miami

(Read the interview with the playwright here.)