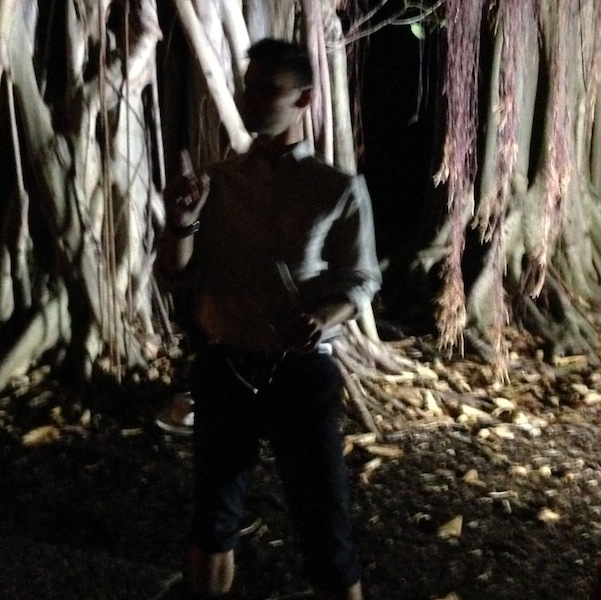 The stage is a fixed space. It is the axis around which story, conflict, and character revolve. When that fixed space shifts, new possibilities emerge. Starting Wednesday, April 23, a shifting site for theater emerges at Deering Estate, a 444-acre environmental, archeological, and historical preserve along the edge of Biscayne Bay in Palmetto Bay. Four local playwrights have collaborated to create a site-specific, immersive theater piece where audience members roam the grounds of Deering to discover drama and humor among the coral, ocean, and palm.

“Estate,” written by Stephanie Ansin, Hannah Benitez, Vanessa García, and William Hector under the mentorship of playwright Kenny Finkle and dramaturge Michael Yawney, is the story of a wedding gone awry. The four playwrights researched and wrote independently and then collaborated in a series of playwriting workshops to develop the material. Finkle encouraged the four to uncover stories unique to Miami writers: “I wanted them to create something as a collective and explore the possibilities of creating work that lives outside a theater,” explains the New York-based playwright. “I also wanted them to think more consciously about the exchange between performer and audience as well as ways to connect to a historical landmark in South Florida and explore how its past resonates today and onwards.”

One of the participating playwrights, Vanessa García, has created over a dozen plays in South Florida and beyond. Still, the experience was unique and timely. “Site-specific work is important now because boundaries are less and less clear,” says García. “I have this theory that as our surfaces begin to disappear through technology — for example, the thinner our screens become, the more we enter virtual realities — the more something like site-specific work both mirrors and becomes the ‘technology’ we use to make art.”

García adds that collaborative projects like “Estate” inspire wider community participation: “I think devised work – work that is constructed through process and collaboration – is extremely inclusive, bringing together varying ideas, mindsets, all toward one purpose.”

The resulting theatrical piece, performed by actors from the University of Miami, will lead audience members to different sites of the Deering Estate. Director Scott Palmer explains that the audience will experience the event in four separate groups from the entrance to the Deering Estate. “The performance is part guided by the characters that the playwrights have created,” says Palmer, “and partly allowed to discover intimate moments and encounters in and around the Richmond cottage, the Stone House and the immediate area around the buildings.”

Deering Estate and Miami-Dade County Department of Cultural Affairs co-present “Estate” on Wednesday and Thursday, April 19 and 20 at 8:00 p.m. and Saturday, April 22 at 4:30 and 8:00 p.m.; Deering Estate, 16701 S.W. 72 Ave., Palmetto Bay. Admission to the play is free but reservation is suggested at Eventbrite.com, Estate@Deering Site-Specific Plays .