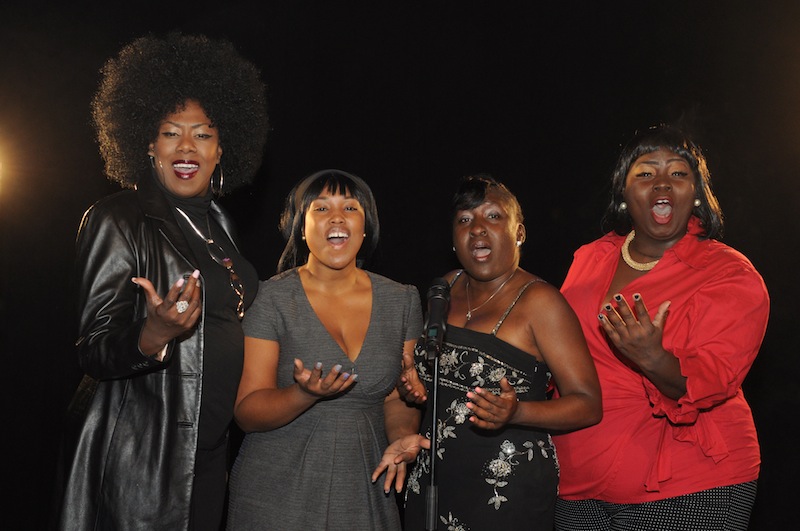 Born Eunice Kathleen Waymon – she took her stage name from “Niña,” a boyfriend’s nickname for her, and the first name of actress Simone Signoret – the singer seemed to live many lives before her 2003 death in France at 70 from cancer.

Created by David Grapes II, Robert Neblett and Vince di Mura, the show contains 32 numbers sung by four women portraying Simone at different ages, though that concept is fluid enough to allow the performers to sing solos as well as songs involving all of them. And what sheer vocal beauty this quartet brings to the stage of the center’s Wendell Narcisse Performing Arts Theater.

Nina 1, Sarah Gracel-Anderson, is the young North Carolina piano prodigy whose Methodist minister mother supported her ambitions to study at Philadelphia’s Curtis Institute of Music, which crushingly rejected her.

Nina 2, Ja’Nia Harden, is the woman who took a stage name to keep her family from learning she had taken up performing “the devil’s music” in bars and clubs.

Nina 3, Toddra Brunson-Soloman, is the fierce activist whose scorching Mississippi Goddam, a kind of musical Black Lives Matter protest of its day, is a roar of pain at the murders of civil rights leader Medgar Evers and the four young girls killed in the bombing of Birmingham’s 16th Street Baptist Church.

Nina 4, Deana Butler-Rahming, is the mature artist, a singer with a honeyed soulfulness still battling many of the emotional demons that drove her into exile.

Directed by Theodore “Teddy” Harrell Jr., with vocal direction and choreography by Isis Roberts and musical direction by pianist John Harden II (who provides live accompaniment along with guitarist Delano West, bassist Ryan Reid and drummer Jason Kent), the production is simple but visually striking. Set designer Michael Miles has created upstage “curtains” out of symbolic chains, and lighting designer Eric Quinn projects images of Simone and others onto them. Costumers Jacqueline Hodge and Karla Cohen dress the Ninas in era-appropriate styles for the first act, gowns and elegant African head wraps for the second.

What makes Simply Simone so worth seeking out, though, are the cast’s haunting, moving renditions of songs associated with Simone. You’ll hear her first hit, the aching I Loves You Porgy from Porgy and Bess. The uplifting anthem, To Be Young, Gifted and Black, suggested by the title of her friend Lorraine Hansberry’s unfinished play, is there. The mournful, disturbing Strange Fruit, sung most famously by Billie Holiday, is part of the show. Butler-Rahming sings a gorgeous version of Jacques Brel’s Ne Me Quitte Pas. You’ll hear Sinner Man, The Look of Love, Don’t Let Me Be Misunderstood, Here Comes the Sun – and so many more.

Simply Simone is enlightening entertainment that serves as a reminder of several things: a powerful artist’s travails and triumphs; the distressingly enduring nature of racial conflict; and the ability of a theater company with relatively modest means to create work that impresses and matters.