“Show of the season,” Hamilton comes to South Florida 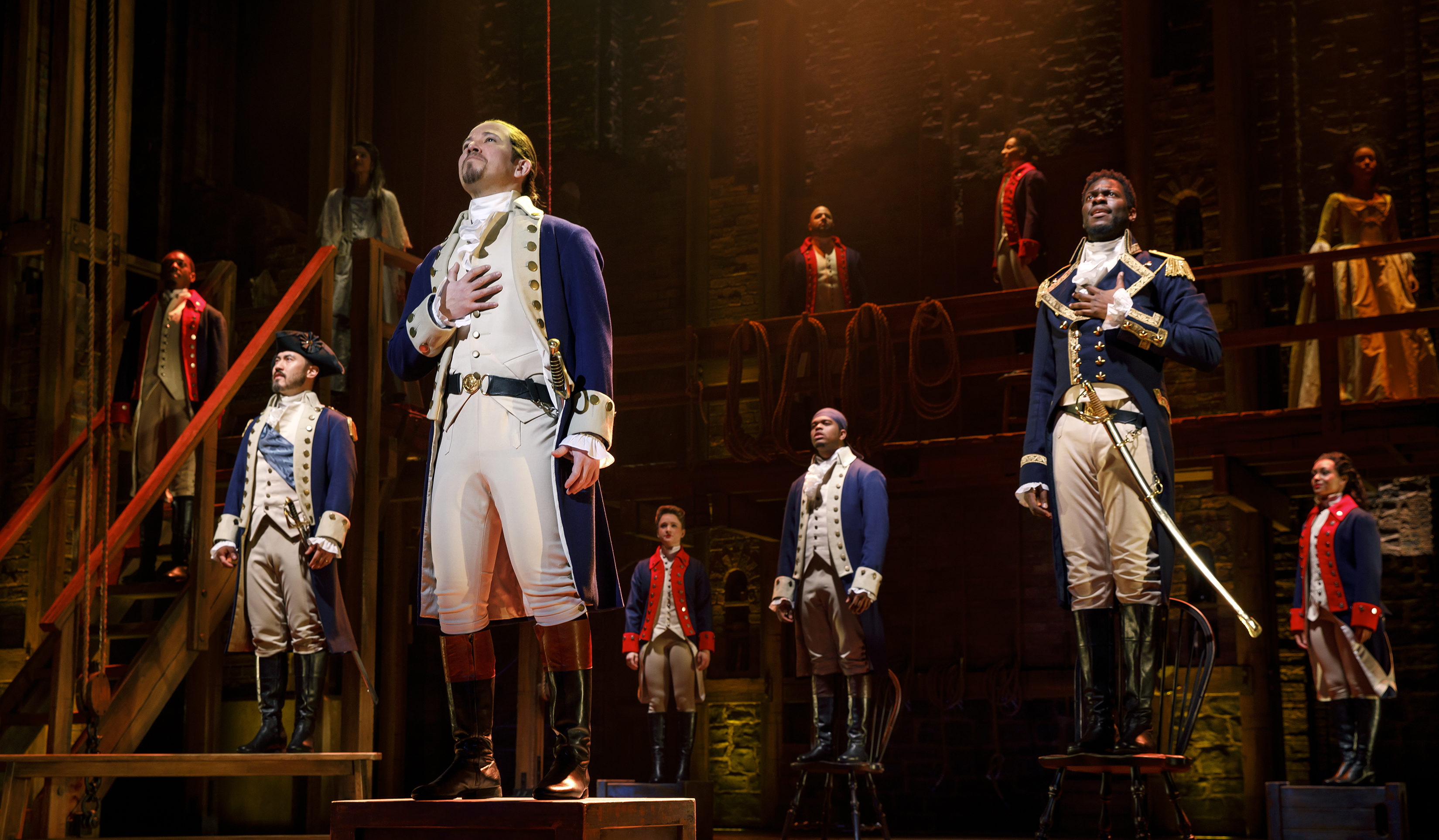 Though this may be preaching to the choir – or to the uncounted fans who have helped transform “Hamilton” from a groundbreaking piece of musical theater into an enduring cultural phenomenon – Lin-Manuel Miranda’s Pulitzer Prize-winning show really is a work of genius.

The 2015 Broadway smash has finally made its way to South Florida, where it will play a nearly sold-out run at Fort Lauderdale’s Broward Center for the Performing Arts through Jan. 20. Forty tickets per performance will go to winners of a daily online lottery, but everyone else will have to pony up for verified resale tickets via the Broward Center and Ticketmaster web sites, or wait ‘til the show returns to Miami’s Arsht Center in the 2019-2020 season.

The hype surrounding “Hamilton” runs deep, but as the touring company at the Broward Center so thrillingly demonstrates, the musical’s accolades are entirely justified.

Miranda won Tony Awards for the show’s score and book, though “Hamilton” is a piece almost entirely sung-through (and rapped-through).  His work, and the intricate musical achievements of Miamian Alex Lacamoire (the Tony-winning musical director and orchestrator), are showcased on the smash Broadway cast CD. That two-disc recording transformed more than a few fans into fanatics who know every word of “Hamilton” without having seen it onstage.

Yet what you quickly realize once you enter the room where “Hamilton” happens is that the show is a superb collaborative achievement by its creative team: Miranda, Lacamoire, director Thomas Kail and choreographer Andy Blankenbuehler.  The four received special awards at the Kennedy Center Honors earlier this month, recognizing the extraordinary piece they created together.

Inspired after reading Ron Chernow’s 2004 biography “Alexander Hamilton,” Miranda saw in the story of the 18th century Founding Father a tale that could resonate powerfully in 21st century America.

Born illegitimate in the Caribbean, orphaned as a child, Hamilton came to New York as a teen determined to make something of himself. By the time he was killed by Vice-President Aaron Burr in a duel in 1804, Hamilton had fought in the Revolutionary War, helped found a nation and the Federalist Party, established the United States financial system (as well as the Coast Guard and the New York Post); he was, by every measure, an “up-from-the-bottom” immigrant success story.

“Hamilton” the musical turns on the friendship, rivalry and deadly reckoning between the brash, outspoken Hamilton and the more guarded, calculating Burr.  Though the show is solidly grounded in history, Miranda has reworked certain elements for greater dramatic effect (Hamilton’s beloved sister-in-law Angelica Schuyler, for instance, was already married when the two met).  And with the white Founding Fathers played by actors of color, we are reminded that our country’s inspiring, fractious history belongs to everyone.

On scenic designer David Korins’ set, which looks like a centuries-old space made of wood, brick and stone, Burr serves as storyteller, guide and charismatic Hamilton opponent.  Actor Nik Walker delivers a riveting performance, one notably different in temperature from the cooler work of Leslie Odom Jr. in the original Broadway company.  This magnetic Burr is just as focused on power, recognition and legacy as Hamilton, who seems always to be thwarting and outperforming him, until their deadly duel seems inevitable.

Also flipping the script from the Broadway original, in which Miranda played the hungrily ambitious title character, Joseph Morales is an altogether milder Hamilton.  It may be that the actor’s mic level was off during much of Wednesday’s performance – when he used a hand-held microphone during his two cabinet battles with Thomas Jefferson, his voice was powerful and clear – but having to strain to sort out the words of this brilliant if flawed Founding Father creates an imbalance between the focal rivals.

Still, from Hamilton and Burr to the large ensemble of breathtaking dancers, the touring cast delivers a spellbinding show that, with or without its turntable in action, creates the sensation of a near-constant swirl of motion.

As Hamilton’s loving, wronged wife Eliza, Shoba Narayan finds every damning syllable of the aching pain in “Burn.” Ta’Rea Campbell conveys the intellect and restlessness that draw her Angelica Schuyler to Hamilton, as well as her bedrock loyalty to her sister Eliza.  Nyla Sostre plays their sister Peggy in the first act, then becomes the irresistible Maria Reynolds for the second-act scandal that nearly took down Hamilton’s marriage.

Also impressive in dual roles are Miamian (and New World School of the Arts grad) Fergie L. Philippe as the bold spy Hercules Mulligan and the much lower key Bill of Rights author James Madison; Kyle Scatliffe as Lafayette and as Hamilton opponent (and future president) Thomas Jefferson; and Elijah Malcomb as Hamilton’s friend John Laurens and as his eldest son Philip Hamilton, who would die at 19 in a senseless duel in New Jersey near the spot where Burr would later take his father’s life.

As the leaders of Great Britain and the newly minted United States, Jon Patrick Walker and Marcus Choi inhabit diametrically opposed characters. Walker delivers the comic relief of King George III commenting on the chaos in his colonies, but he later spins into the zany madness that marked the king’s later years, going for Monty Python-style lunacy.  Choi is an inspiring, grounded George Washington, and his beautiful voice makes “One Last Time” among the highlights of the show.

Conductor-keyboard player Roberto Sinha, a graduate of Miami’s Coral Reef Senior High, leads the 10-piece orchestra in navigating the shifting styles of Miranda’s music, from the numbers driven by hip-hop to tender ballads, show tunes to the overwhelmingly powerful moments when the entire cast is singing of a world turned upside down. Repeating musical and lyrical motifs are threaded throughout “Hamilton,” and Sinha, his musicians and the cast turn them into a glorious tapestry.

The show’s production values – Korins’ set, Paul Tazewell’s glorious costumes, Howell Binkley’s lighting, which suggests candlelight, exploding munitions and the blood-drenched battlefield – are of a piece with the other elements of “Hamilton.” Superb.

Cheers to those who already have tickets to the show of the season.  For anyone else curious to how “Hamilton” reimagined history-inspired storytelling, good luck with the lottery or with next season’s Miami run.

‘Hamilton’ is at the Broward Center for the Performing Arts, 201 SW Fifth Ave., Fort Lauderdale, through Jan. 20; 8 p.m. Tuesday-Friday, 2 and 8 p.m. Saturday, 1 and 7 p.m. Sunday (no performance Dec. 25, additional 2 p.m. matinee Dec. 26); tickets cost $78-498 but are largely sold out; Ticketmaster offers verified resale tickets on the Broward Center site, at prices ranging from just over $100 to more than $1,000 per ticket, depending on date and seating location; the #HAM4HAM digital lottery offers 40 tickets at $10 each to every performance; use the official app http://hamiltonmusical.com/app or visit http://hamiltonmusical.com/lottery to register;  954-462-0222 or www.browardcenter.org