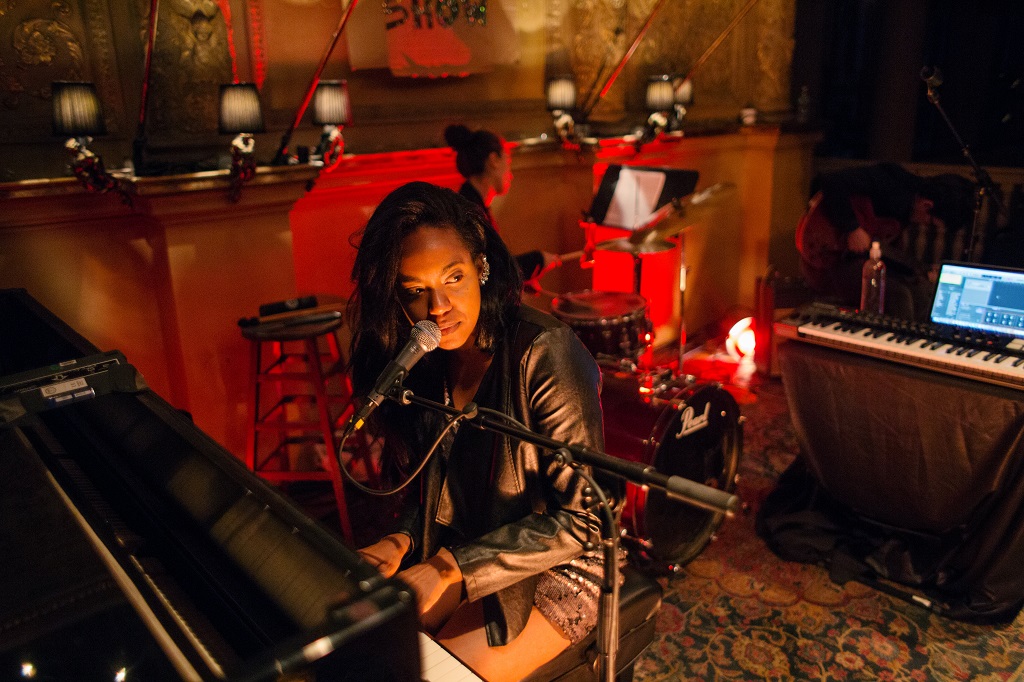 When Whitney White saw “Passing Strange,” a rock ‘n’ roll autobiography by a guy who goes by the name of Stew (his real name is Mark Stewart), she says she was transfixed by the possibilities.

The New York-based actress/director/writer took Stew’s format to heart. “Passing Strange,” which played at the Belasco Theatre on Broadway in 2008, and has had subsequent productions since, did something different – it combined the heart of musical theater storytelling with the soul of a rock concert.

White had always wanted to showcase some of William Shakespeare’s most fiery women, yet not put off her audience with simply spouting ancient text. Intrigued by Shakespeare’s women, and inspired by Stew’s concert plays, she had an idea of a way to bring The Bard closer to her audience – as she says, “His work can be so distancing.” She created her own concert play. White sings at the microphone, and sometimes rocks out on piano. Another musician, Billy Finn, plays electric guitar, and participates with dialogue. “The thing about Shakespeare’s women is there’s always a man,” says White.

She created “Macbeth in Stride” in 2015, taking a rock and roll approach to Lady Macbeth, zeroing in on the descent of one of Shakespeare’s most powerful female characters. It would be the first part of what she hopes is a series of concert plays exploring Shakespeare’s women. “Macbeth” would play in cabaret type venues, including Joe’s Pub at the renowned Public Theater in New York City.

“Yes, it feels like a concert, and then we dive into the story, so the audience experiences these stories with contemporary music and Shakespeare’s text. It’s been an interesting process. There’s been a great response to it.”

Now she’s readying her second installment, “By The Queen,” which has been selected as part of Miami Theater Center’s SandBox Series.

“Queen Margaret is the only character that appears in so many of Shakespeare’s plays,” explains White during a break in rehearsals at the SandBox. The show runs May 25 through June 2 inside the Miami Shores blackbox theater.

“She literally survived over the course of many plays,” says White. Queen Margaret of Anjou appears as a major character in Shakespeare’s first tetralogy of history plays, “Henry VI,” Part 1, Part 2, and Part 3, and finally in “Richard III.”

“When we first meet her,” says White, “she’s a young girl, and she’s being pawned off to this guy for marriage. And then we see her go from that to becoming Queen, then becoming this kind of victim of war. She’s a bit epic among Shakespeare’s women. Like Lady Macbeth, she kicks ass.”

“Macbeth in Stride” had a drummer and she may add one, too, for “Queen,” quite possibly, she says, plucked from YoungArts in Miami. White was introduced to the Miami-based National YoungArts Foundation by one of its alumni, Michael Arden, a 2001 alum of YoungArts, and 2016 Tony Award-winner as Best Director of the musical “Spring Awakening.” Earlier in May, she was assistant director to Arden for the YoungArts Showcase held at New York’s Baryshnikov Arts Center.

“I had no idea YoungArts was headquartered in Miami,” she says. “Now I have some new Miami friends,” says the Chicago native.

While her interpretation of Lady Macbeth’s turbulent story, which took a look at the tumultuous relationship between Lady M and her husband, was set to the music of another raging couple, Ike and Tina Turner, “By The Queen” gets its mojo from the brassy, rock ‘n’ roll blues of Janis Joplin. Finn once again plays her fall guy on guitar and does double duty with dialogue.

“I’m a woman of color, too, so I’m interpreting these stories as I would, yet I am telling stories that every woman, and man, can understand. About obstacles that come our way. Shakespeare’s plays still feel like a container for our world.”