Review: ‘Shakespeare Is a White Supremacist’ is part of a timely, overdue conversation 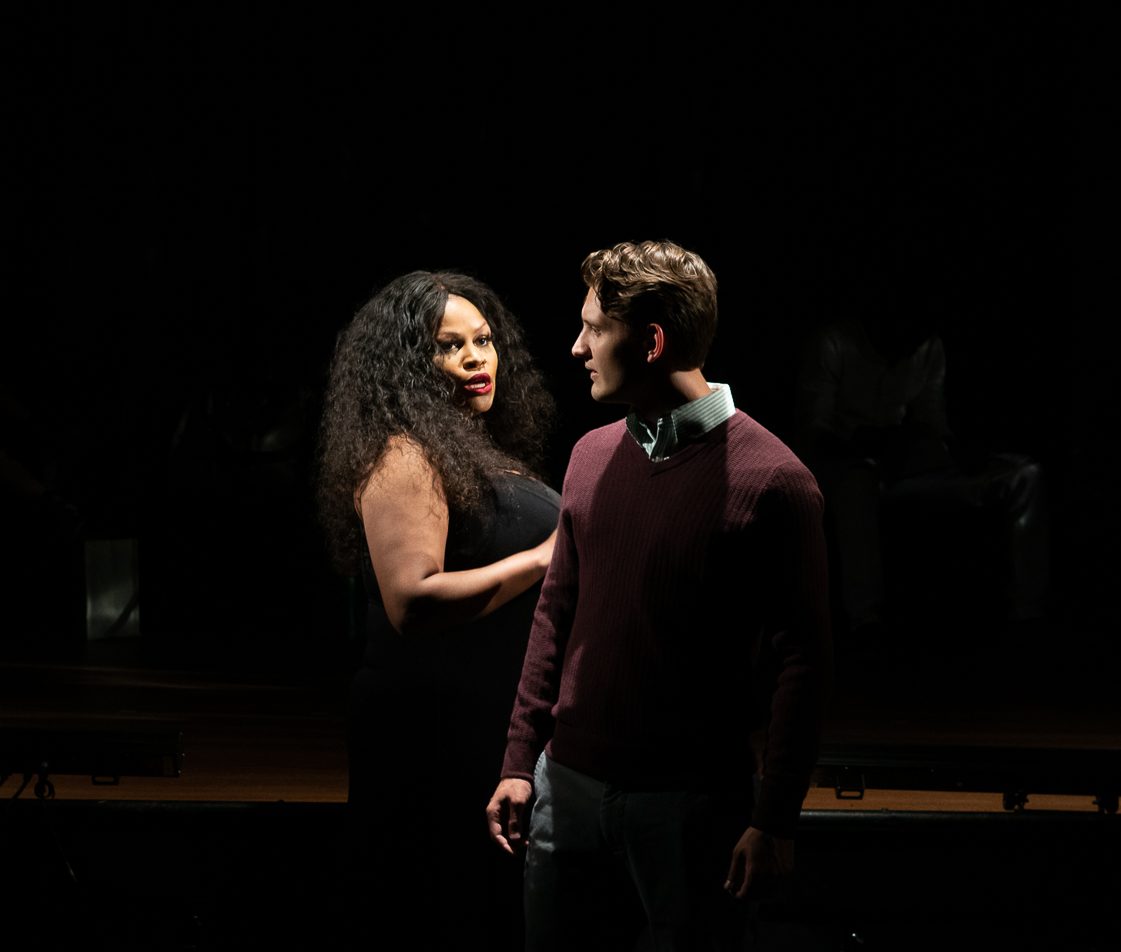 Chasity Hart is Titania and Matthew Salas plays a character known only as the Director in Main Street Players’ “Shakespeare Is a White Supremacist.” (Photo courtesy of Olimac Media)

William Shakespeare has been called many things in the centuries since he crafted many of the greatest works of the English language. He has been the subject of endless scholarly debate and investigation, and his plays have been interpreted and reinterpreted across time and countless cultures.

The Bard of Avon’s works were nothing if not thought-provoking, holding the mirror up to racism in “Othello” and antisemitism in “The Merchant of Venice.” Still, the title of Andrew Watring’s play – “Shakespeare Is a White Supremacist” – is a provocation of a different sort, one designed to make you sit up, pay attention and think, “Was he?”

Though the play was written in 2017 and developed further in 2018 when Watring was a student at American University in Washington, D.C., it’s only now getting its professional world premiere with the Main Street Players in Miami Lakes.

Staged by Carey Brianna Hart, the piece is set in a rehearsal room given over to auditions. A young, white man referred to only as Director (Matthew Salas) is speaking passionately about creating a “really special” production of Shakespeare’s “A Midsummer Night’s Dream,” with all the roles played by actors of color.

But as it turns out, the attention-grabbing title notwithstanding, the play is not so much about Shakespeare as it is about the experiences of those actors in theater itself. 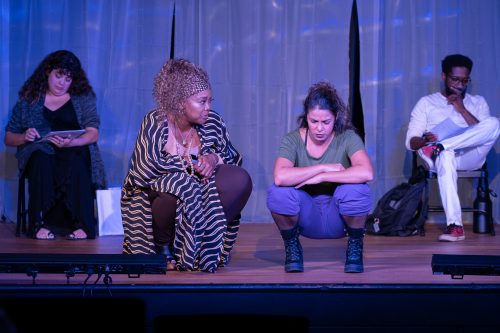 Experimental in style, deliberately non-linear, “Shakespeare Is a White Supremacist” is emerging at a time when issues surrounding equity, diversity and inclusion are finally getting a long-overdue spotlight in the arts. During the pandemic and concurrent with nationwide protests over the murder of George Floyd, BIPOC (Black, Indigenous and People of Color) artists spoke out about institutionalized racism, the lack of genuine opportunities and serious consideration for roles, colorism in casting, and the punishing toll of stereotyping.

Though the writing doesn’t rise to the level of Branden Jacobs-Jenkins’ “An Octoroon” or Quentin Tarantino’s “Django Unchained,” Watring’s script is observant, unsettling and, in one fever-dream passage near the end, savage in its depiction of usually unspoken racist thoughts and beliefs.

Except for the Director and a white woman called Actress (Erin Wilbanks), the auditioning actors all have Shakespearean names, a needlessly confusing conceit.

Macbeth (Roderick Randle), a Black actor who’s a flattery-prone pal of the Director, is going up for the part of Oberon. He assures the other actors that this guy is someone who really listens, who really makes space for them and their ideas. Yet it’s not long before the Director is pushing Macbeth, pushing him hard to go deeper, then asking the Black actor to perform something from “Othello.”

Juliet (Annette Monk), an Afro-Latina actor who is a bit older than the other women, is weary of not being able to play roles like Cleopatra, of being boxed into parts where she becomes invisible and silent. She complains that she’s told she doesn’t look Latina and that she doesn’t “perform blackness” to the expectations of white directors – or Black ones, for that matter.

Titania (Chasity Hart), a regal woman onstage and off, vividly illustrates colorism by willing the actors to line up according to their skin tone. She repeats a question she’s too often asked – “What are you?” – adding that the questioner then looks her over, “trying to piece together a racist genealogy for each of my features.”

Viola (Katlin Svadbik) and Ophelia (Vanessa Tamayo) are Latina actors often assumed to be white, and each has an issue. 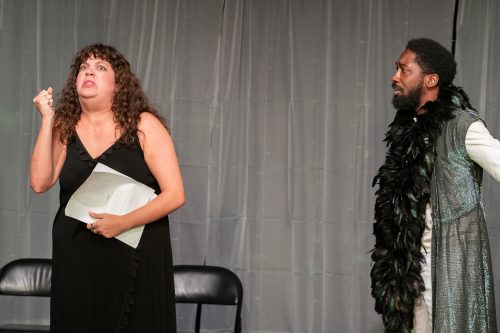 The characters played by Erin Wilbanks and Roderick Randle face off during “Shakespeare Is a White Supremacist.” (Photo courtesy of Olimac Media)

Viola is dating the Director, who crosses personal boundaries in the rehearsal room, setting off resentment among the other actors. Her audition piece, a beautifully delivered version of Phebe’s monologue from “As You Like It,” is especially telling, as it perfectly applies to her callow beau.

Ophelia, who will be playing Puck in “Midsummer,” is trying to improve her English and lose a noticeable accent. Too often, she feels invisible, unseen and unheard.

“Shakespeare Is a White Supremacist” loops repetitively from auditions to rehearsals to performance, and though Alex Tarradell’s chimes-and-drum sound design is meant to help, it too is repetitive. Set and lighting designer Amanda Sparhawk’s rendition of a utilitarian rehearsal room and the stage beyond, with a mirror allowing the actors to do their makeup as we watch, brings the performers’ offstage world to the forefront. Angie Esposito has designed transformative costume pieces that allow us to observe the magic as actors in rehearsal clothes transform into the vivid characters of “A Midsummer Night’s Dream.”

Full of unsettling but believable microaggressions, Watring’s script is challenging to act. And though it has necessary moments of tension-relieving humor – many of those delivered by Wilbanks as the flamboyant Actress – it’s also unnerving, sometimes painful to watch.

After being challenged over and over by the Director, his supposed friend, Randle’s Macbeth unravels, railing about Black stereotypes made palatable to white audiences, then sinking into himself as he tries to physically contain his pain. Randle’s work in the scene is both ferocious and excruciating. 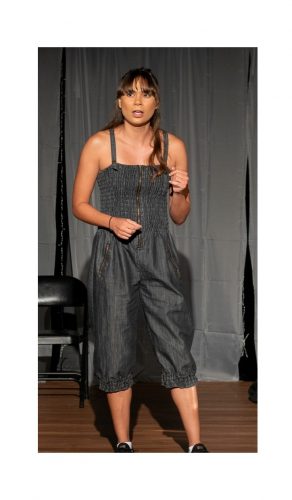 Katlin Svadbik portrays Viola, a Latina struggling to juggle the professional and the personal. (Photo courtesy of Olimac Media)

Hart’s Titania commands the stage, sometimes deliberately, sometimes with nuanced subtlety. Hart is an actor who works infrequently in South Florida theater, but she deserves a wider range of opportunities.

Despite some opening-night nerves, each of the actors plumbed the anxieties and disappointments of the characters. Salas, though, should ratchet up the clueless tyranny of the Director, who naively believes himself enlightened and different.

The director of “Shakespeare Is a White Supremacist,” Carey Brianna Hart (no relation to Chasity Hart), has staged the play with the authority and insight of an artist who deeply understands the world of Watring’s play. Throughout her career as an actor, director, stage manager and educator, she has been in a position to observe the good, the bad and the sporadic ugly racism of the way theater gets made in South Florida. At the Main Street Playhouse, she and her cast get to chime in on a reckoning too long in coming.

WHAT: “Shakespeare Is a White Supremacist” by Andrew Watring

COST:  $30 for general admission; $25 for students, seniors and military personnel

SAFETY PROTOCOLS: The Main Street Playhouse has decreased seat capacity, among its safety changes, and encourages mask wearing for “all unvaccinated patrons” and social distancing. Additionally, a streaming version of the play will become available on Oct. 15 and run until Nov. 21 for those not yet comfortable returning to the theater. Streaming tickets will be $10 a person.