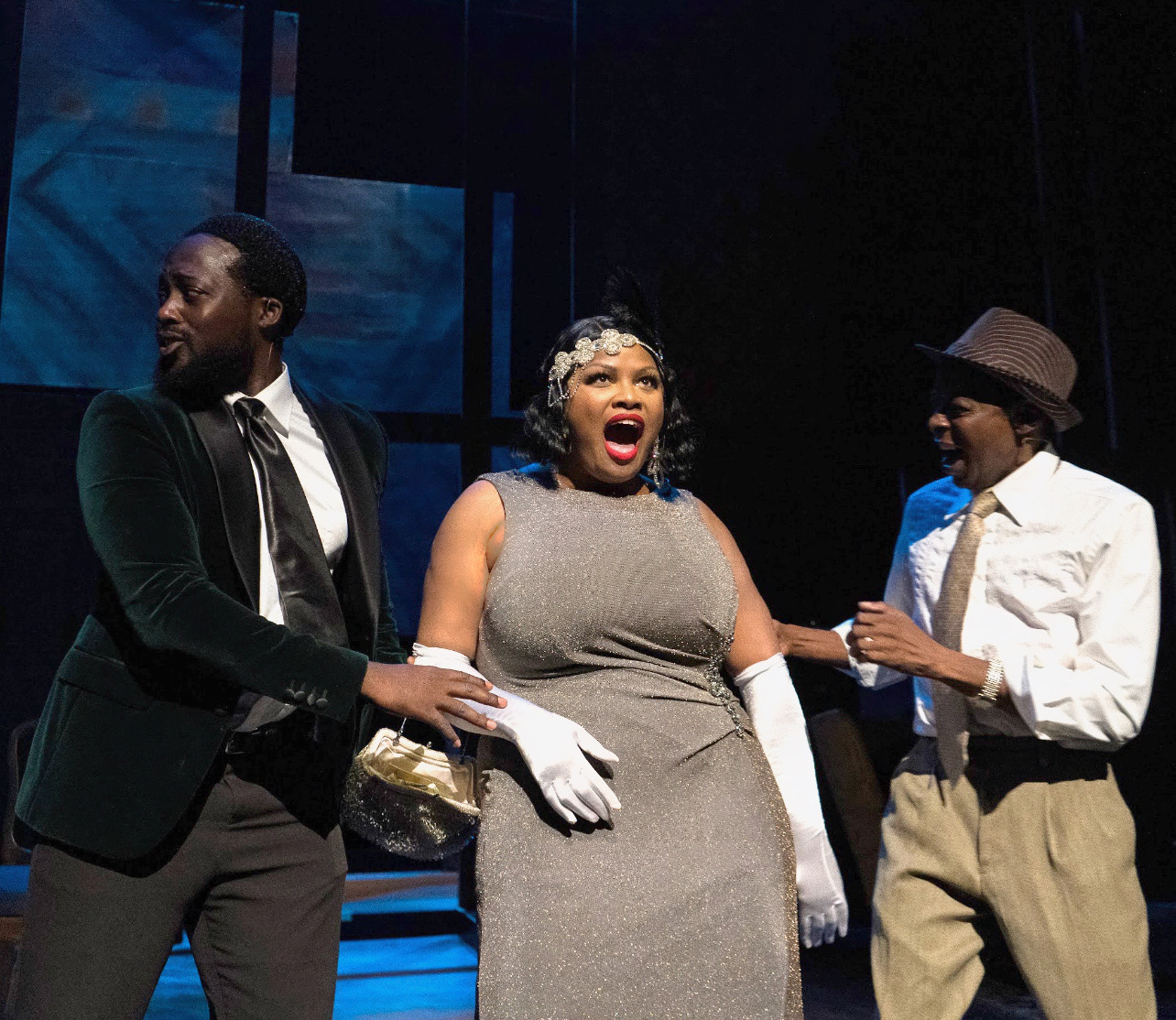 Jean Hyppolite, Chasity Hart and Chat Atkins in a scene from M Ensemble’s “Blues for an Alabama Sky” at the Sandrell Rivers Theater weekends through May 29. (Photo courtesy of Christa Ingraham)

The characters in Pearl Cleage’s “Blues for an Alabama Sky” are caught somewhere between the creative, hopeful heaven of the Harlem Renaissance and the hellish economic collapse of the Great Depression.

The gay designer, the singer-showgirl, the neighborhood doctor and a family planning crusader aren’t blood relatives. But they have become a kind of family by choice, looking out for each other as they try to navigate the highs and lows of Harlem in 1930. And oh, does Cleage’s play give them plenty to navigate.

Miami’s M Ensemble, the 51-year-old Black theater troupe that is Florida’s oldest continuously producing professional company, first presented “Blues for an Alabama Sky” in the summer of 2001. The play is having its encore production at the Sandrell Rivers Theater in Liberty City.

What no one could have anticipated in scheduling the show is that, not long before the opening, a draft of a Supreme Court opinion striking down Roe v. Wade as settled law would be leaked.  The battle over abortion has again become a raging pro-choice/pro-life war, leading to protests throughout the United States. That most volatile of issues figures into “Blues for an Alabama Sky,” giving the play a freshly powerful resonance. 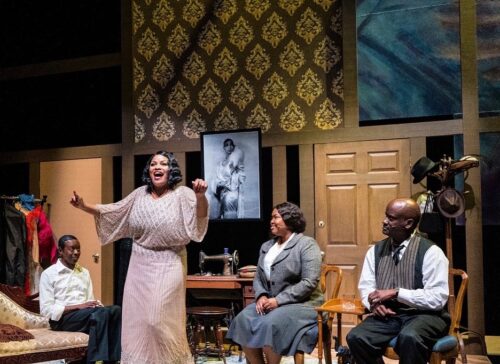 Cleage’s tale (which clocks in at just under three hours, not that it needs to be that long) takes place in neighboring Harlem apartments and on the sidewalks outside.

Guy Jacobs (Chat Atkins) and Angel Allen (Chasity Hart), longtime pals who came up from Georgia to conquer the big city, become roommates again. She’s been dumped by her shady Italian boyfriend, leading to a huge public scene and getting the friends both fired from their steady jobs at the Cotton Club.

Guy, an out-and-proud costume designer whose social circle includes poet Langston Hughes, keeps the wolf from the door by making showgirl outfits for local clubs.  But his incessant dream, his raison d’être, is to go to Paris and design for the great performer-activist Josephine Baker.  Angel? She’s a self-centered beauty with an outsized personality.  Fiercely focused on self-preservation, pragmatic when it comes to taking advantage of besotted men, she’s cut from the same cloth as Sally Bowles in “Cabaret.” To say she’s an emotionally erratic combination of hope and disillusionment is an understatement.

Their next-door neighbor is Delia Patterson (Sarah Gracel), a young woman working with birth control pioneer Margaret Sanger to set up a family planning clinic in Harlem.  To get the community on board, Delia is trying to gain the support of the dreamy Rev. Adam Clayton Powell Jr. and her fellow worshippers at the Abyssinian Baptist Church.

Both apartments become a refuge for the weary local doctor Sam Thomas (Keith C. Wade), who follows endless hours of delivering babies with imbibing Prohibition hooch or Champagne with his pals, then going out to clubs. Work hard, play hard. Or as Sam is always saying, “Let the good times roll!”

A stranger arrives in the very first scene, pitching in as Guy guides the ferociously drunken, barely ambulatory Angel back to his place.  Leland Cunningham (Jean Hyppolite) has left Tuscaloosa, Alabama, mourning the deaths of his wife and newborn son.  Like so many Southerners in the Great Migration, he has come north to start over. And after he spies Angel, who looks eerily like his late wife, Leland becomes focused on starting over with her. 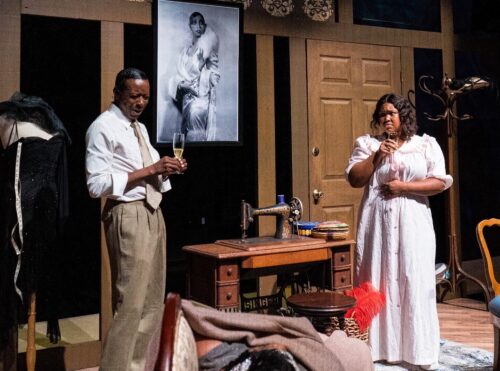 Chat Atkins and Sarah Gracel toast to the future in M Ensemble’s “Blues for an Alabama Sky.” (Photo courtesy of Christa Ingraham)

Cleage, a novelist as well as a prolific playwright, paints a portrait of excess and loss with the evocative images in the play’s dialogue.  The homeless in Harlem are “a bunch of sad-eyed souls wondering who pulled the rug out.”  Angel wants to flee the shards of her romantic past, Harlem itself and “all those cryin’ colored ghosts.”  She is, she says, “tired of Negro dreams.”

Among the issues Cleage explores in “Blues for an Alabama Sky” are women’s body autonomy, homophobia, gun violence and the unending struggle of survival in hard times  – all of which make a 1995 play set in 1930 freshly impactful for audiences in 2022.

Director Carey Brianna Hart, who has a long history with M Ensemble and other South Florida companies as an actor, director and stage manager, has drawn fine performances from her talented cast, and her staging of scenes in the two apartments is intimate and effective.

However, timing glitches on opening night slowed the play down.  Mitchell Ost’s set looks unfinished, and the “outside” space requires the actors to walk around it on the black-box theater’s barren floor as they pretend to be in bustling Harlem.  The uncredited scene-bridging music contributes mightily to the play’s atmosphere, and lighting-projection designer Aatiyah Malik knows how to amplify both a romantic moment and harsh reality.  Company founders Patricia E. Williams and Shirley Richardson are part of the production’s design team, Williams with period props and Richardson with costumes (though some of the latter aren’t right for the era). 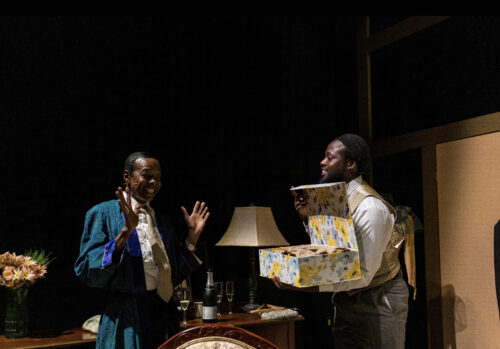 Chat Atkins passes smiling judgment on a gift Jean Hyppolite plans to give the woman he’s wooing in the M Ensemble production of “Blues for an Alabama Sky.” (Photo courtesy of Christa Ingraham)

Two veteran M Ensemble actors give significant, very different performances in the play. Atkins, whose work I’ve observed for years, explores new territory here. He turns his character Guy, a man who has faced racial and sexual orientation bias, and whose dreams are on the cusp of coming true, into a layered and sympathetic figure.  Wade conveys Sam’s steadiness, his need for escape from the stress of delivering babies, and his later-in-life experience of falling in love.

Hyppolite has the tough but meaty challenge of playing Leland, a man with traditional conservative values who becomes the villain of the play after his relationship with Angel goes into a tragic spiral.  Gracel, a Carbonell Award winner for “Dreamgirls,” offers a quiet contrast to Angel as Delia, a loyal friend and a woman driven to change her community for the better.

Chasity Hart (no relation to the show’s director) gives a sublime, heartbreaking performance as Angel, who has come to yet another messy crossroads in a life full of such moments.  She’s complicated yet still surprisingly naïve for a woman who has been repeatedly exploited as she struggles to survive.

Hart gets and communicates all the facets of Angel’s character, whether through Cleage’s words or through emotions that play across her striking face.  The New World  School of the Arts grad is also a singer, a terrific one, as the audience gets to hear (all too briefly) when Angel sings a bit of  W.C. Handy’s “The Saint Louis Blues,” her equivalent of worship on a Sunday morning.  Here’s hoping someone will cast her in a musical sooner rather than later.

WHAT: “Blues for an Alabama Sky” by Pearl Cleage

TICKETS:  $31 (student and senior discounts available at the door)