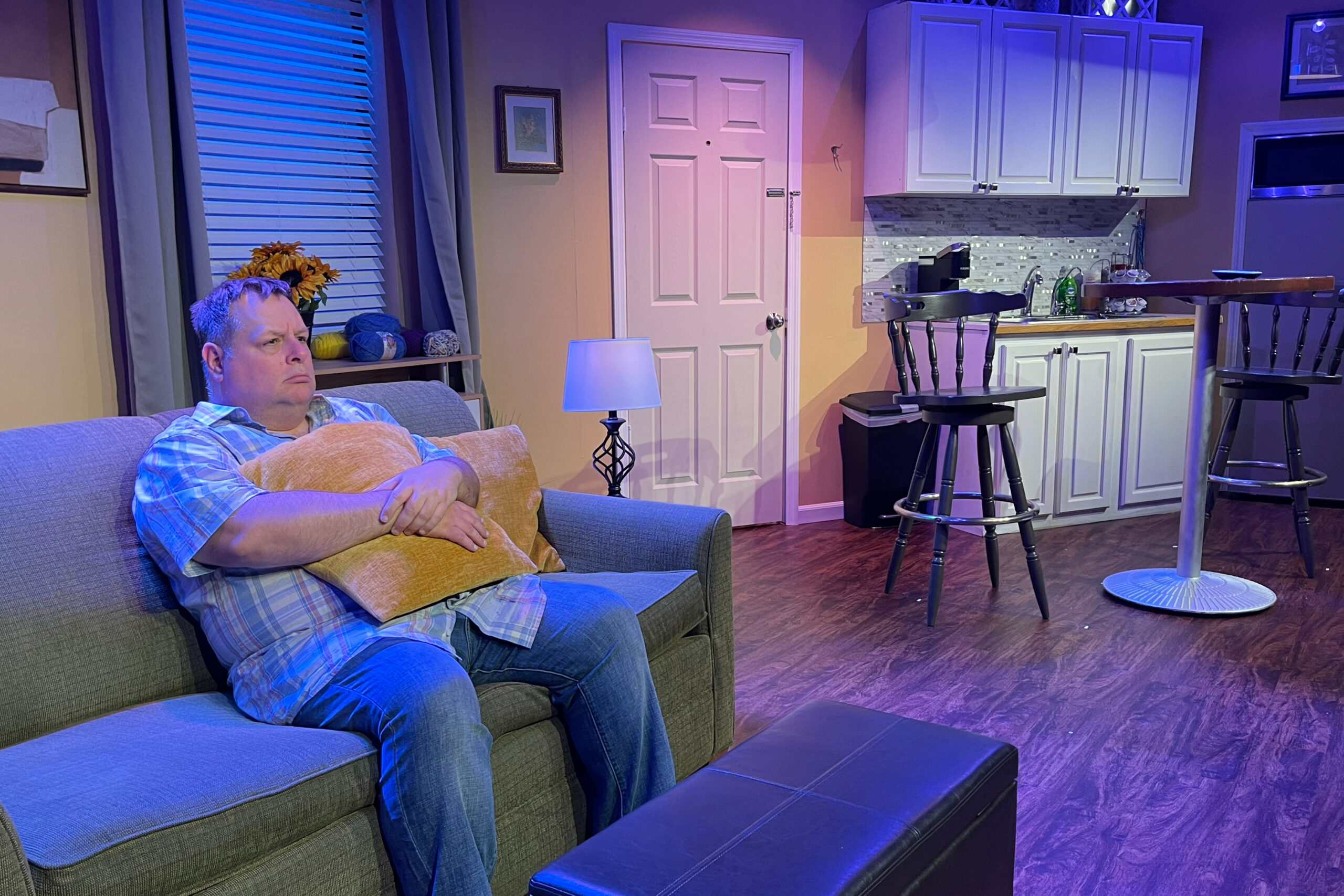 Ronnie Larsen stars as a man who hires actors to portray his family in “The Actors” at Plays of Wilton in Wilton Manors running through Oct. 2. (Photo courtesy of Jeff Walters)

Ronnie Larsen, a multi-faceted talent who writes and produces plays and musicals, sometimes acting in them and/or directing them, has created a body of work that is the definition of eclectic.

His gay-themed pieces (most recently the wild comedy “TruckStop Sally’s Sex Party”) draw enthusiastic sold-out audiences to The Foundry. The small Broward County theater where Larsen’s Plays of Wilton performs and the larger Island City Stage next door have created a compact theater district along a stretch of Dixie Highway in Wilton Manors.

At the moment, Larsen has taken yet another turn with his award-winning comedy “The Actors,” which he describes as his first “G-rated show.”  Yes, this is a different addition to the Larsen oeuvre. But start to finish, “The Actors” underscores this truth about him: He’s a skilled actor-playwright with great depth. 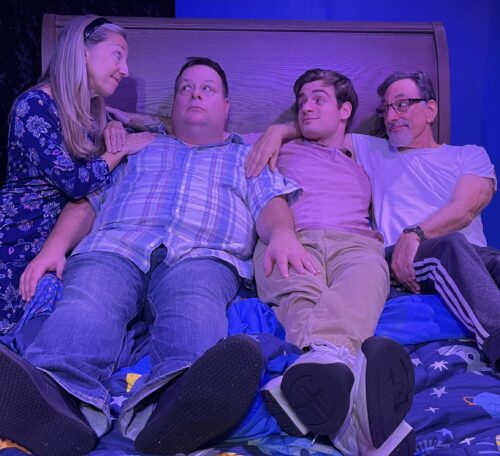 Directed by Stuart Meltzer, the artistic director of Miami’s Zoetic Stage (who also staged Larsen’s “Grindr Mom”), the autobiographically inspired “The Actors” focuses on a depressed, lonely middle-aged man named Ronnie Larsen (who is, of course, played by the author).

Ever since the death of his mother Jeanette from cancer and his father Claire from a heart attack, Ronnie has struggled with a grief that will not dim.  So, he has come up with his own unusual form of therapy:  He’ll hire a pair of actors to come over and play his parents.  They’ll hang out, watch television, eat together and remind their sad no-longer-little boy that he is loved.  Maybe, Ronnie thinks, that void will become a little less empty.

Both of the actors, Jean (Hacker) and Clarence (David Kwiat) see the weirdness in what Ronnie calls “the project,” but since they need the work, they commit.  That’s when things really start getting weird.

“The Actors” is frequently a very funny play, particularly when top-of-their-game Miami-Dade County Carbonell winners Hacker and Kwiat are engaging in some of their stranger antics.

Hacker, for instance, is too petite to simply gaze through the peephole in Ronnie’s front door, so whenever someone knocks, she has to leap up for a quick peek.  Because Ronnie’s real mom was a knitter, Jean buys needles and some chopped-up yarn so she can sit on the couch faux knitting.  Kwiat’s face speaks sly volumes when he’s inventing a backstory for Clarence and Jean, the better to persuade his acting partner to fully go for it (sex included) as pretend man and wife. 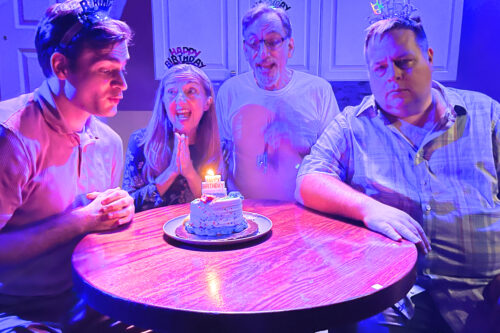 Although “The Actors” could benefit from some tightening (it feels long at two hours with an intermission), the play is multi-layered and stylistically rich, realistic and absurdist.  Meltzer, who is so deft with comedy and drama, has shaped hilarious and tender moments with his cast, finding nostalgic sweetness in the father-son relationship, juvenile jealousies once Ronnie’s fake brother enters the picture, and a fine balance in Hacker’s quicksilver shifts from wary actor to self-assured mom.

The apartment set, with a kitchen cupboard packed with sugary-to-the max cereal, is by Michael Richman.  Lighting designer Preston Bircher and sound-lighting tech Panos Mitos facilitate mood and aural time travel. The most attention-grabbing costume is one that Larsen supplied for himself: adult-sized Superman jammies that instantly transform a sad man into a rambunctious kid.

Larsen’s theater career to date has been as prolific as it is singular.  “The Actors” deserves a continued life at theaters around the country. But through Oct. 2 in Wilton Manors, you can laugh at and be moved by one of Larsen’s best plays and by its author’s excellent, deeply felt performance – and you should.

WHAT: “The Actors,” a Plays of Wilton production, by Ronnie Larsen