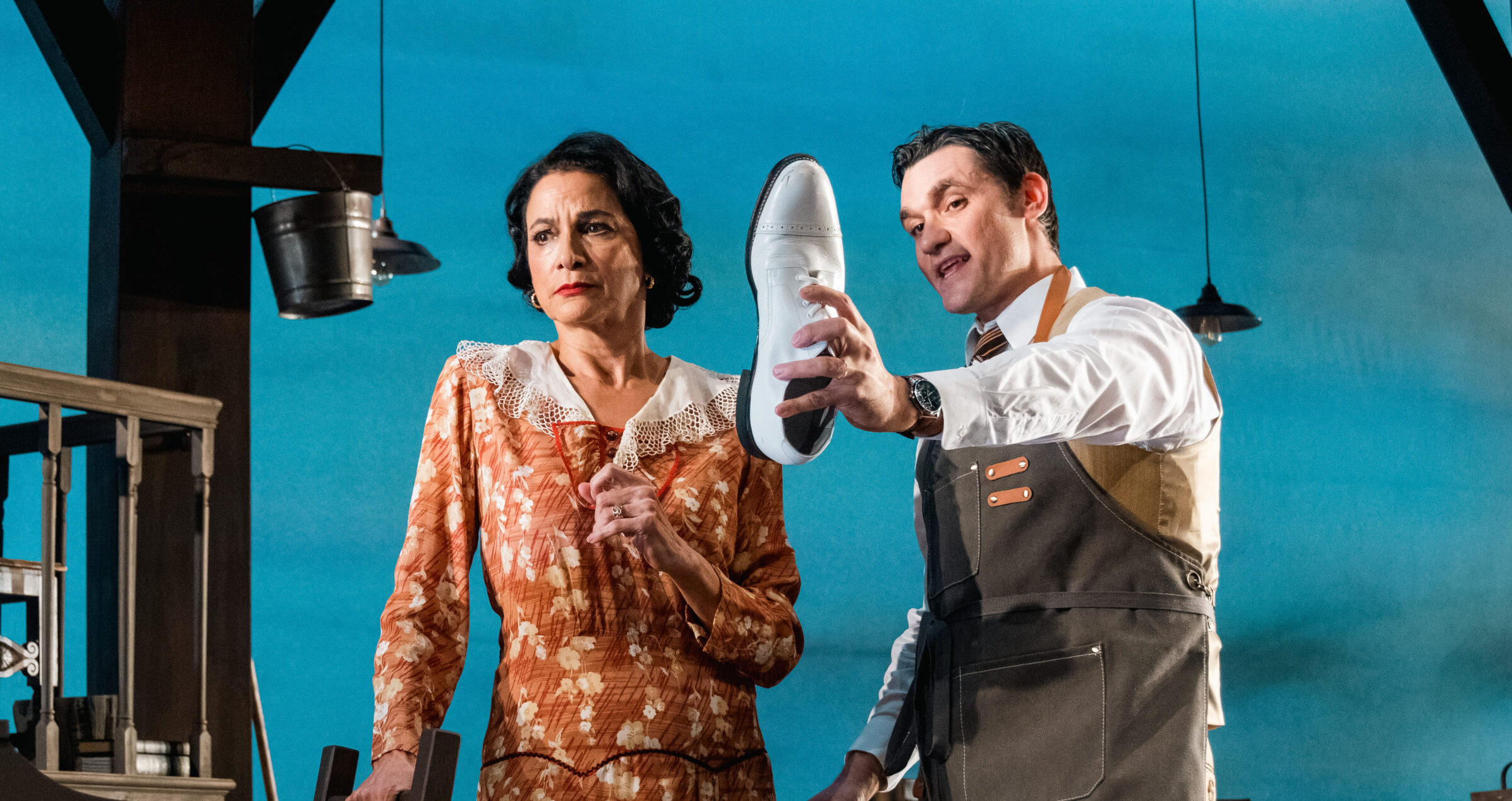 Saundra Santiago as Ofelia and Daniel Capote as Cheché in Nilo Cruz’s “Anna in the Tropics” at Miami New Drama through Sunday, Feb. 5. (Photos courtesy of Andres Manner)

In his best-known play, Nilo Cruz blends vivid imagery, Cuban-American history and tradition, the imagination-inspiring power of great literature, and a sensuality so electric you can almost hear it sparking.

Two decades after “Anna in the Tropics” made him the first Latino playwright to win the Pulitzer Prize for drama, Cruz is now revisiting the work that sent his career soaring.

Miami New Drama’s exquisite anniversary production of the play features Cruz in the dual roles of author and director.  In the years since “Anna in the Tropics” had its world premiere at the intimate New Theatre in Coral Gables, Cruz has become an impressively artful interpreter of his own work – the new production of “Anna” included. 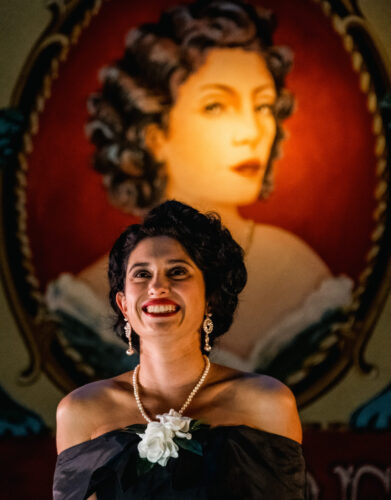 Set in Ybor City near Tampa in 1929, “Anna in the Tropics” honors, explores and laments the impending end of traditional practices in a small Cuban-American cigar factory.

One of those traditions is to have a lector read novels and newspapers to the workers, entertaining and enlightening them, relieving the monotony of hand-rolling hundreds of cigars each day.  “Anna in the Tropics” also becomes a testament to the life-altering possibilities of literature when the factory’s handsome new lector, Juan Julian Rios (Gabriell Salgado), chooses Leo Tolstoy’s “Anna Karenina” as the first novel he’ll read.

Patriarch Santiago (Serafin Falcon), struggling with gambling and alcohol abuse, avoids the work area for a while but is still near enough to know that he likes what he hears from the lector.  His half-brother Cheché (Daniel Capote) and Conchita’s cheating husband Palomo (Brandon Espinoza), on the other hand, mock Juan Julian. For different reasons, both want him gone. 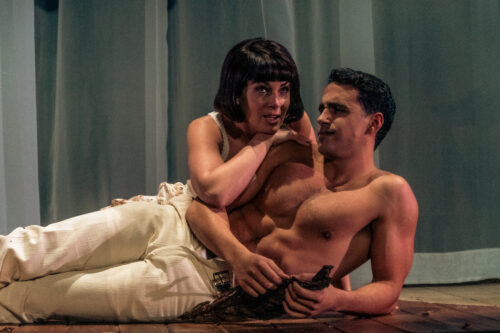 Girlish Marela tries but fails to get Juan Julian to reciprocate her crush.  He has eyes for Conchita; soon enough, the two are sharing their personal histories, flights of fancy and kisses that cascade into an unrelenting passion.

Sometimes funny, sometimes fiery, “Anna in the Tropics” is also a gathering tragedy. For the play to fully pay off in the heart-stopping way the best dramas do, Cruz as director and his cast have to precisely elicit and deliver a spectrum of emotions.  And they do, in a collection of superb performances.

The striking Guillen, who radiates allure and a mysterious complexity as Conchita, transforms from a dissatisfied wife to an ardent, awakened lover.  She navigates her love triangle unapologetically, changing from a traditional woman into a modern one who would risk trysts in the place where her entire family works.

Thanks to Cruz’s direction, as well as the chemistry and skill of Guillen and Salgado, the scene that ends the first act – the words are about one thing, the actions another – becomes inevitable, emotionally potent and irresistible.

Salgado, who has been in demand since graduating from the New World School of the Arts in 2019 and making his debut in Zoetic Stage’s “Frankenstein” in 2021, is notably younger than most other actors who have played Cruz’s life-changing lector. 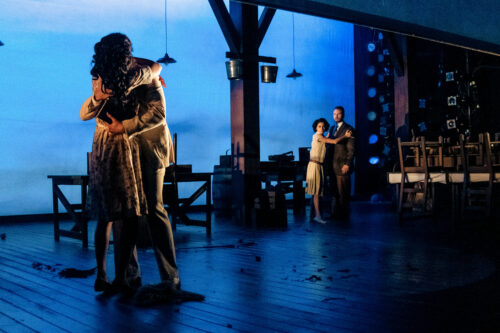 Hannia Guillen and Gabriell Salgado embrace as Andrea Ferro holds back a furious Brandon Espinoza in Nilo Cruz’s “Anna in the Tropics.” (Photo by Andres Manner)

Yet the choice works and imbues this “Anna” with different emotional colors.  Salgado’s Juan Julian is dreamy, whether he’s in his off-white three-piece suit or shirtless with Conchita on the factory floor.

But the actor is also effectively playful, particularly with Marela as a way of trying to keep her romantic feelings at bay.  He conveys the seductive power of words, whether Tolstoy’s or Cruz’s, and once Conchita has begun applying Juan Julian’s love lessons to her marriage, he looks lost and emotionally adrift.

Espinoza has a challenge as Palomo, a character mysterious in his own way. He observes his wife and the lector making love, then greedily demands details from Conchita, even insisting that she demonstrate what the lector does with her.  Yet Espinoza’s Palomo convincingly reclaims his transformed wife, so much so that you feel (at least a little) for Juan Julian.

Ferro is a wonder as Marela, a sparkplug of a human being whose hope and joy make her nearly incandescent.  She has many notes to play, including unrequited love and a traumatizing attack.

But she’s not always the sweet girl. Her half-uncle Cheché, whom she calls by his given name Chester as if it were a curse, is the frequent target of her disdain. The two share a pair of disturbing scenes, and as staged by Cruz, the second one is horrifying if not surprising.

Though Cheché becomes the villain of the piece, Capote brings such a range of emotions to the role that his deeply effective performance is arguably his best ever – and it’s among the best from a long line of actors who have played Cheché.

Capote communicates the character’s loneliness and longing, the sting of his past humiliation, his frustration at having his ideas dismissed.  Yes, his final actions are terrible, but Capote makes it crystal clear how a broken man arrived at that place. 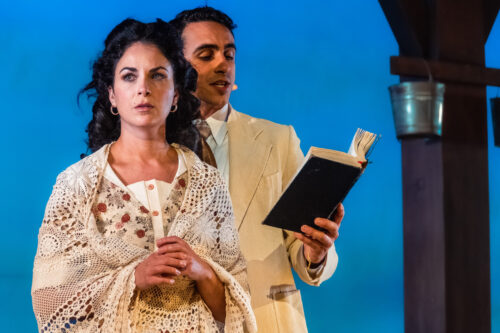 Hannia Guillen as Conchita takes in the words of Gabriell Salgado as Juan Julian as he reads from a Leo Tolstoy masterpiece in “Anna in the Tropics.” (Photo courtesy of Andres Manner)

Falcon’s appealing Santiago is a man at one of those later-in-life crossroads, a loving husband and father whose self-destructive behavior is eating away at his life and livelihood. When he cares to be, he’s strong and decisive. But he’s also capable of vulnerability, as when he asks the frequently angry Ofelia whether she is done with loving him.

As Ofelia, Santiago (a University of Miami grad who launched her career on “Miami Vice”) is almost fragile, though she’s angry enough as she watches Cheché scheming to play a bigger role in the factory while her husband is mentally checked out.

But she, too, changes in the party scene celebrating the factory’s launch of a new “Anna Karenina” cigar.  Her Ofelia grows uninhibited the more she drinks, dances with her dashing husband, then beautifully sings a snippet of “Can’t Help Lovin’ That Man,” from the musical “Show Boat,” which made its debut two years earlier than “Anna in the Tropics” takes place.

Christopher Vergara mainly opts for a sepia-toned palette in his lovely-to-look-at collection of period costumes.  The most striking exception is the black ball gown worn by Marela, chosen by her father to be the face of the company’s new cigar. The dress helps transform Ferro’s petite Marela from energetic girl to the embodiment of Tolstoy’s tragic beauty. 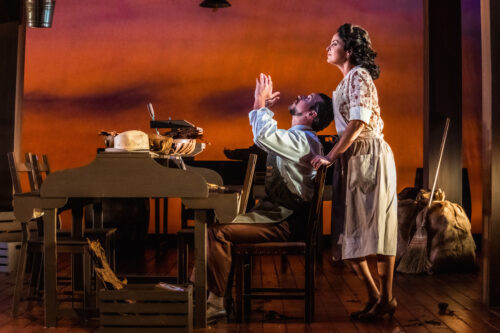 Brandon Espinoza’s Palomo expresses his feelings to Hannia Guillen as his wife Conchita in Nilo Cruz’s “Anna in the Tropics.” (Photo courtesy of Andres Manner)

The 20th anniversary “Anna in the Tropics” illustrates yet again a truth about theater. Unlike many kinds of art, theater is an in-the-moment communal experience for the actors and audience. And when a particular production’s run ends, that’s almost always it, no matter how special or successful the show is.

Born in Cuba and raised in Miami, Cruz is an artist of international renown, a man dedicated to looking at his work with fresh eyes. He does that even with a play as acclaimed as “Anna in the Tropics,” finding a just-right cast to bring the piece to vibrant life.  It is special. But after Feb. 5, this decidedly special celebration of an artist’s deeply moving work will close.  And though there have been and will be other productions of “Anna in the Tropics,” this one stands out.

WHAT: 20th-anniversary production of “Anna in the Tropics” by Nilo Cruz