Review: Zoetic’s ‘Side by Side by Sondheim’ is a highly entertaining, engaging memorial to a giant 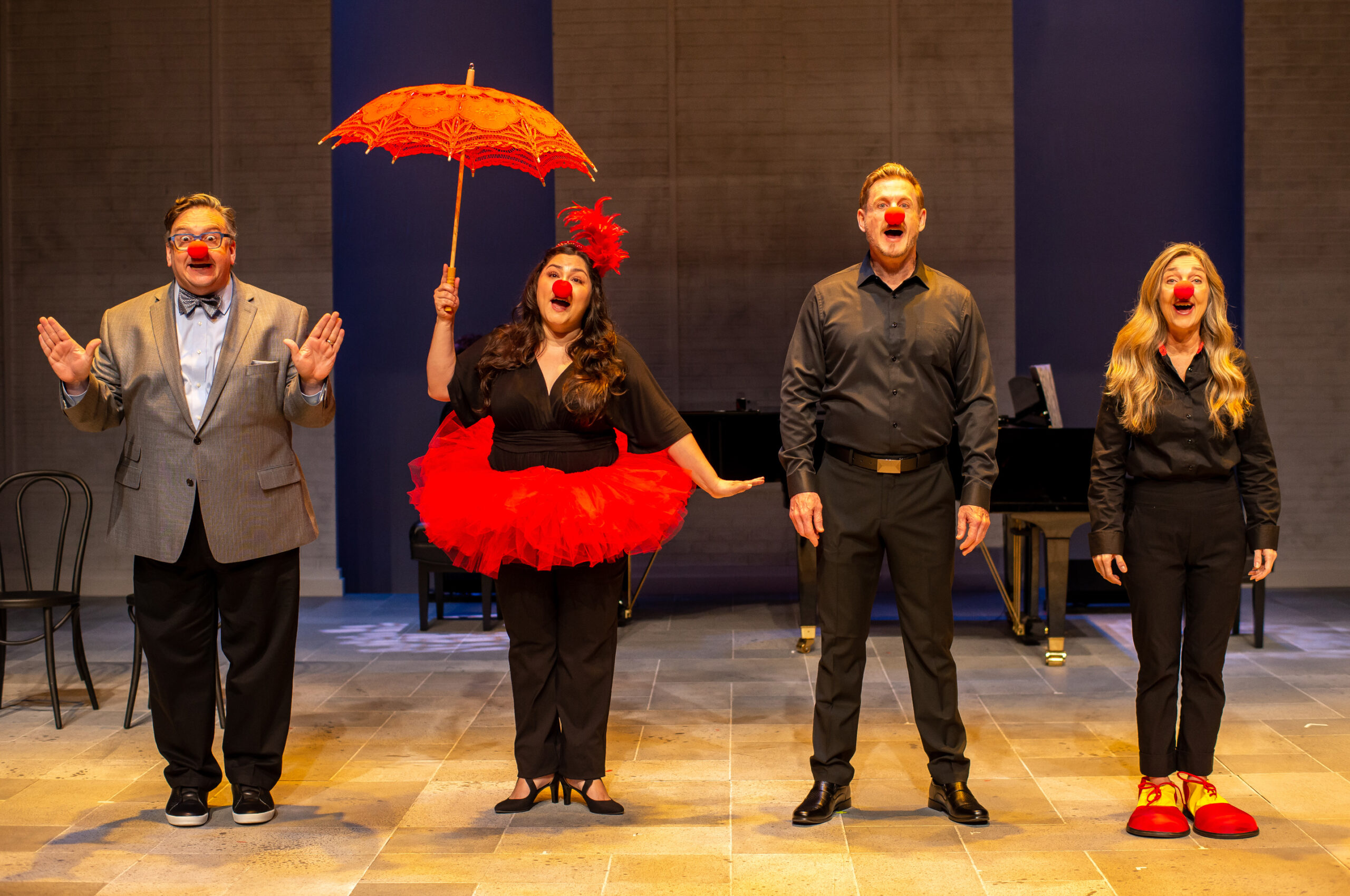 From left, Stuart Meltzer, Joline Mujica, Aloysius Gigl and Jeni Hacker promise some comedy in Zoetic Stage’s “Side by Side by Sondheim.” (Photo/Justin Namon)

During his singular career as a brilliant and influential composer-lyricist, the late Stephen Sondheim was nothing if not eclectic in his choice of subject matter. The vicissitudes of marriage, childhood trauma, and the price of creating art are just three of the themes Sondheim explored in his wide-ranging body of work.

Though Sondheim collaborated as a lyricist with great composers such as Leonard Bernstein (on 1957’s “West Side Story”), Jule Styne (1959’s “Gypsy”) and Richard Rodgers (1965’s “Do I Hear a Waltz?”), the 16 shows he created as both composer and lyricist between 1954 and 2003 made him an icon to generations of musical theater artists and audiences.

Sondheim, who died in November 2021 at age 91, has been celebrated in at least a half-dozen revues devoted to his work. The first of these, 1976’s “Side by Side by Sondheim,” is now playing at the Arsht Center’s Carnival Studio Theater, where Miami’s Zoetic Stage is paying tribute to Sondheim’s art with art of its own.

“Side by Side by Sondheim” — the show and this production of it — seems simple enough. But, as with all things Sondheim, its riches run deep. 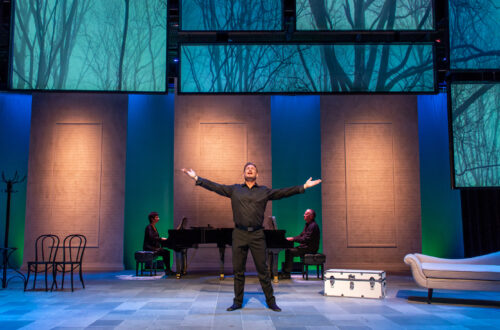 Performed by three singers, a narrator and two pianists, the show includes tunes from “West Side Story,” “Gypsy,” “A Funny Thing Happened on the Way to the Forum,” “Company,” “Follies,” “Anyone Can Whistle,” “A Little Night Music,” “Pacific Overtures,” and a 1966 television production of “Evening Primrose” — more than enough for a revue that runs two hours plus an intermission.

Because the revue was created in 1976, you’ll hear nothing from “Sweeney Todd,” “Merrily We Roll Along,” “Sunday in the Park with George,” “Into the Woods,” “Assassins,” “Passion” or “Road Show,” all post-’76 Sondheim musicals. Even so, you get some visual reminders of some of those shows via projected photos from past Zoetic productions.

Zoetic’s artistic director and cofounder, Stuart Meltzer, has a deep and abiding appreciation for Sondheim’s work, so much so that he has stepped into the role of narrator. He sings just a bit (the first bars of the opening number, “Comedy Tonight,” are his), helps drive the action, and offers context and insight through his narration. He is, in a word, charming.

And of course, since he’s also the show’s director, Meltzer (with the help of many collaborators onstage and off) is responsible for its tone. Zoetic’s “Side by Side” is playful, joyous, at times virtuosic. Here and there, a moment misses, but most meet Sondheim’s abundant challenges. The result is a highly entertaining, engaging, living piece of theater that also serves as a memorial to a giant. 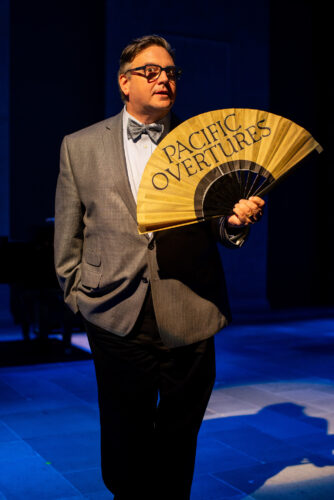 Stuart Meltzer is the narrator and director of “Side by Side by Sondheim,” which is playing at the Arsht Center’s Carnival Studio Theater through April. (Photo/Justin Namon)

With gorgeous two-piano accompaniment by music director Caryl Fantel and Jeff Hess, the versatile performers deliver everything from novelty songs to heartbreaking ballads. Jeni Hacker, Aloysius Gigl and Joline Mujica shift quickly from character to character, from solos to duets to group numbers. Three beautiful voices do justice to Sondheim, and then some.

Hacker and Gigl, who were paired as Mrs. Lovett and the title character in Zoetic’s “Sweeney Todd,” won Carbonell Awards as best actress and best actor in a musical for that show.

Hacker, who also starred as Fosca in Zoetic’s “Passion,” is an absolutely superb singing actor, as adroit with comedy (showcased in “The Boy From … ”) as she is with more serious Sondheim songs (“Send in the Clowns” — more on that in a moment).  She also doubles as the show’s choreographer and fleet-footed tap dancer.

Gigl possesses a magnetic Broadway-caliber baritone, a voice that can summon tears (in “I Remember”), convey longing (“Pretty Lady”) or put the fear of God in you (“Could I Leave You?”). He’s also funny as he gazes into a hand mirror and sings “Tonight.” Think about it.

Mujica, a University of Miami graduate who played Tracy Turnblad in “Hairspray” at Actors’ Playhouse in 2011, has a lovely lyric soprano voice that doesn’t always land as impactfully as it should. “Losing My Mind,” for example, could be but isn’t yet a showstopper.

Speaking of showstoppers: Hacker’s “Send in the Clowns” is exactly that. The Grammy Award-winning number from “A Little Night Music” is among Sondheim’s best-known songs, recorded by Judy Collins, Frank Sinatra and others. Hacker delivers her version seated on a chaise longue, remaining still as her expressive voice and face take the audience on a journey of remembrance and regret. Hers is a truly exquisite, illuminating rendition.

Among other highlights of Zoetic’s “Side by Side” are Hacker’s cold-feet, furiously fast “Getting Married” (with great contributions from Gigl and Mujica); Gigl singing a self-deluding “You Must Meet My Wife;” Hacker and Mujica wallowing in double entendre as they sing “Can That Boy Foxtrot,” then singing a fierce “A Boy Like That,” followed by a tender “I Have a Love.” 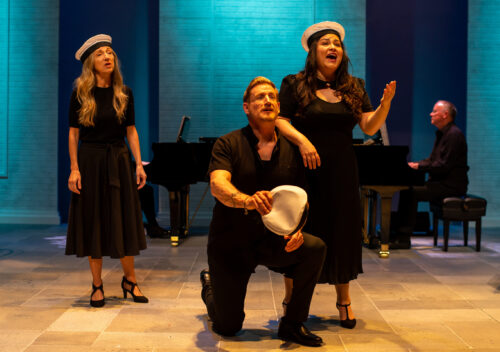 Other moments that don’t quite come off? “You Gotta Get a Gimmick” from “Gypsy,” in which the actors seem to be trying way too hard.  A recurring bit in which an actor exits, followed by a loud crashing sound. The song-stuffed “Conversation Piece” near the end of the show in which the actors sing snippets of other Sondheim tunes but also repeat parts of numbers that have already been done in full.

To deliver the many shifting environments required for so many songs from so many shows, set designer Michael McKeever has created a playing area with versatile panels and screens. Tony Galaska’s lighting sometimes alters their colors, while McKeever-designed projections (with animation by Greg Duffy and projection mapping by Steven Covey) introduce still or moving images. One especially shimmering moment happens as Gigl sings an aching “I Remember,” images of snow and ice are projected, and Fantel and Hess conjure a soft snowfall through music.

Costume designer Marina Pareja supplies dozens of appropriate character pieces that can quickly be added or subtracted from an actor’s basic black outfit. Prop design is by Vanessa McCloskey (who is also the stage manager), and sound is by Matt Corey.

Although Sondheim himself has now exited the stage, his work lives on. “Company” is back on Broadway, and Steven Spielberg’s new take on “West Side Story” is up for seven Academy Awards. “Side by Side by Sondheim” serves as a reminder of a theater artisan’s greatness. And of what endures.

WHAT: Zoetic Stage presents “Side by Side by Sondheim”