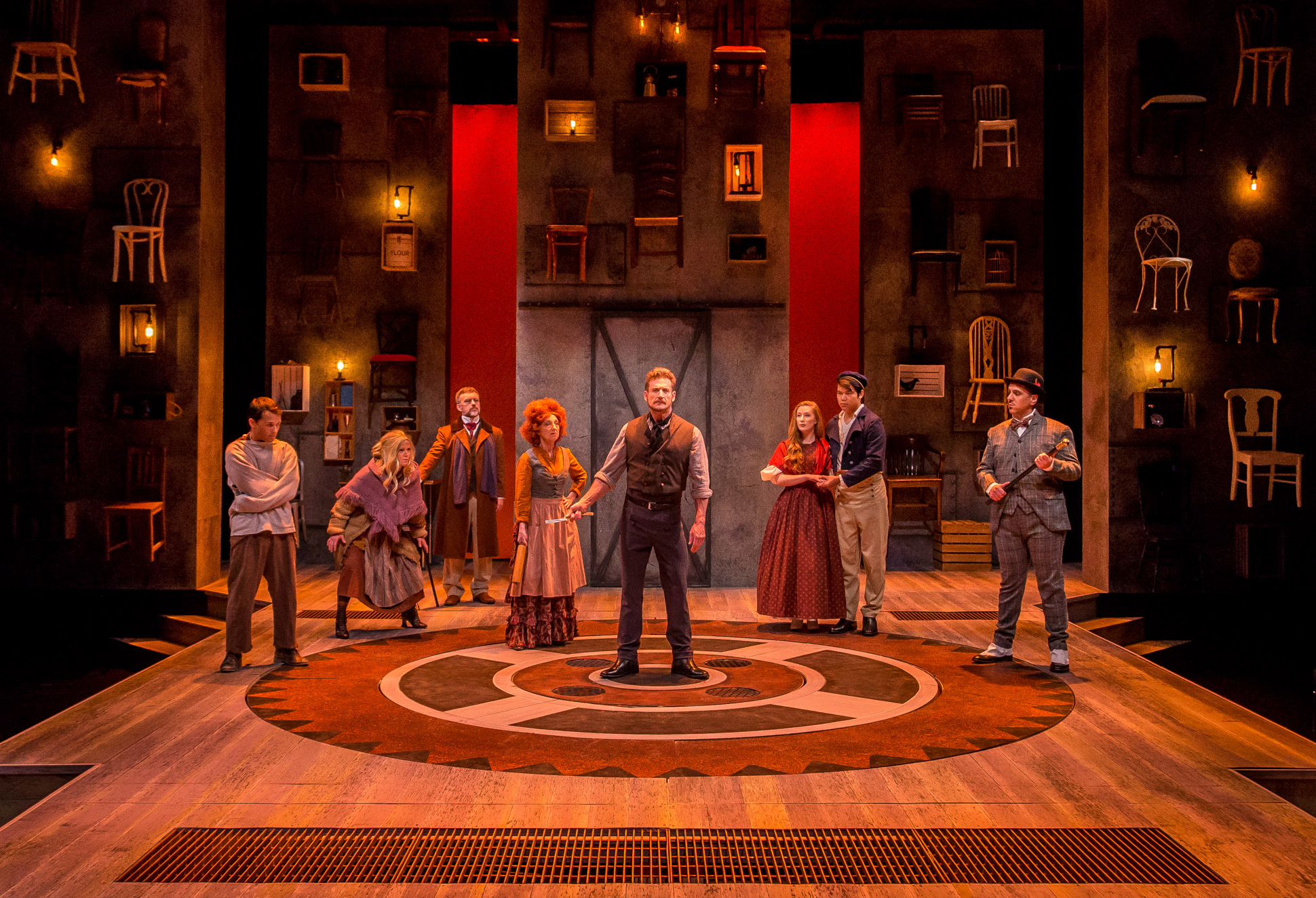 The Stephen Sondheim-Hugh Wheeler musical “Sweeney Todd: The Demon Barber of Fleet Street” turns 40 this year, but the tale of a murderous London barber has been around since it first appeared as a serialized penny dreadful story in the mid-1800s.

Deepened by British playwright Christopher Bond in a 1973 play that inspired Sondheim to create a complex piece he has called a “black operetta,” the Tony Award-winning show has sparked the creativity of generations of directors: its legendary original director Harold Prince on Broadway in 1979, British director John Doyle in London in 2004, Clive Cholerton at Palm Beach Dramaworks in 2017 and, now, Stuart Meltzer of Zoetic Stage.

No matter the interpretation — Prince’s elaborately realized linking of the barber to a soul-crushing Industrial Age; Doyle’s more stripped-down version with the actors doubling as the orchestra; Cholerton’s vivid steampunk rendering of the musical; Meltzer’s intimate, eight-actor version — “Sweeney Todd” captivates audiences with its soaring music and tragic (yet also funny and gory) story.

Zoetic’s production, running through April 7 in the Carnival Studio Theater at Miami’s Arsht Center for the Performing Arts, makes theatergoers one with Sondheim’s complex music and the story of the vengeance-obsessed barber.

When Sweeney Todd (Aloysius Gigl) challenges huckster Adolfo Pirelli (Kimberly Doreen Burns) to a shaving contest, a male audience member is pulled onstage to get the closest shave of his life from Sweeney’s sterling silver razor. Others find themselves briefly sitting next to the cruel Judge Turpin (Terry Hardcastle), his henchman Beadle Bamford (Henry Gainza), smitten sailor Anthony Hope (Nate Promkul) and other cast members, who continue to sing as Sweeney and meat-pie maker Mrs. Lovett (Jeni Hacker) form their unholy (if effective and profitable) alliance.

Back from Australia after being railroaded by Judge Turpin 15 years earlier, his pseudononymous Todd (real name: Benjamin Barker) at first displays some semblance of sanity. But after learning from his landlady, Mrs. Lovett, that Turpin raped Barker’s wife, Lucy, who then poisoned herself, and that the lustful judge is raising the couple’s beautiful daughter, Johanna (Shannon Nicole Booth), as his own, Todd plunges into murderous madness.

He is aided and abetted by the ever resourceful Nellie Lovett, played engagingly by Hacker (ala Angela Lansbury, who originated the role) as a cockney music-hall comedienne. Momentarily distressed when she learns Todd has slit Pirelli’s throat over a blackmail threat, she gets a lemonade-out-of-lemons brainstorm: With decent meat in such short supply, why not transform her tenant’s victims into pie filling? Faster than you can groan, “ugh,” she has a thriving business.

Staged by Meltzer as an up-close, involving experience, with the actor-singers omnipresent even while merely watching someone else’s scene, the production inventively tackles the musical’s many challenges.

One particularly tricky element of the show involves Todd’s dispatching of his victims via his “special” barber’s chair. Typically, the barber slashes his customer’s throat, throws a lever, and the brand-new corpse falls down a chute into Mrs. Lovett’s bakehouse. In this case, the chair is in the center of a double turntable, so the victim slithers precisely from the chair, rides lifelessly to the spot behind the chair, then gets up and walks off. Suspending disbelief in those moments requires quite a stretch.

The six-piece orchestra led by musical director Paul Tine is concealed behind the set, but its vital interplay with the singers is flawless. Sound designer Dan Mayer, an auditory wizard, keeps the musicians and singers in balance throughout the performers’ ever-shifting configurations in the Carnival’s black-box space.

The cast, a mixture of seasoned and young talents, handles Sondheim’s counterpoint and character-tied leitmotifs with aplomb. Gigl takes Todd and the audience on a deep psychological journey from the show’s early moments, when he reveals the character’s tragic back story as he sings “The Barber and His Wife,” to his maddened declaration of wide-ranging vengeance in “Ephiphany.” His cool Todd remains singularly focused on revenge, so much so that Mrs. Lovett’s delusional vision of their future in “By the Sea” barely registers with him.

Hacker, sporting a mound of wild, curly, red hair that gets just minimally tamed as Mrs. Lovett’s fortunes improve, is a superb singer who gets to display her vast comic resources and impeccable timing in a role so vastly different from her Fosca in Zoetic’s version of Sondheim’s “Passion.” Listen as she pops the final “P” when she says, “Excuse me, my lordship,” as she backs away from Judge Turpin. Shudder as she tenderly sings “Not While I’m Around” with Kevin Veloz’s Tobias, knowing she has already made a pragmatic and deadly decision about the suspicious boy’s fate. Hacker’s Mrs. Lovett is a wondrous creation, start to finish.

Hardcastle’s lustful Judge Turpin is the tyrannical, self-flagellating, creepy villain of the piece, and his duet with Gigl’s Todd on “Pretty Women” is lovely, if thoroughly unnerving. Gainza, a Miamian who made his Broadway debut a few seasons back in “On Your Feet,” plays Beadle Bamford as an amusing fop with a hair-trigger temper.  Burns gets a rare chance to play two roles in this “Sweeney Todd,” the swaggering Pirelli (she adds a drawn-on, pencil-thin mustache to play the male character but sings in her natural voice) as well as the pitiable, deranged, bawdy Beggar Woman.

As the young lovers, Booth brings a crystalline soprano to Johanna’s songs (though her articulation on “Green Finch and Linnet Bird” could be more precise), and Promkul as Anthony sings “Johanna” with such aching beauty that you may find yourself tearing up. Veloz, a senior at New World School of the Arts, is sweetly sympathetic as Tobias, though his voice sometimes wanders slightly off pitch.

Zoetic’s “Sweeney Todd” is artfully rendered, as well as beautifully sung and played. As it plunges audience into its world, the story of a monumentally wronged barber and his murderous razor — set in the Victorian era, first told in this form four decades ago — seems tailored for our times.

“Sweeney Todd: The Demon Barber of Fleet Street” is a Zoetic Stage production in the Carnival Studio Theater at the Adrienne Arsht Center for the Performing Arts, 1300 Biscayne Blvd., Miami. It is running through April 7, with performances 7:30 p.m. Wednesday-Saturday and 3 p.m. Sunday. Tickets cost $55. Call 305-949-6722 or go to ArshtCenter.org.